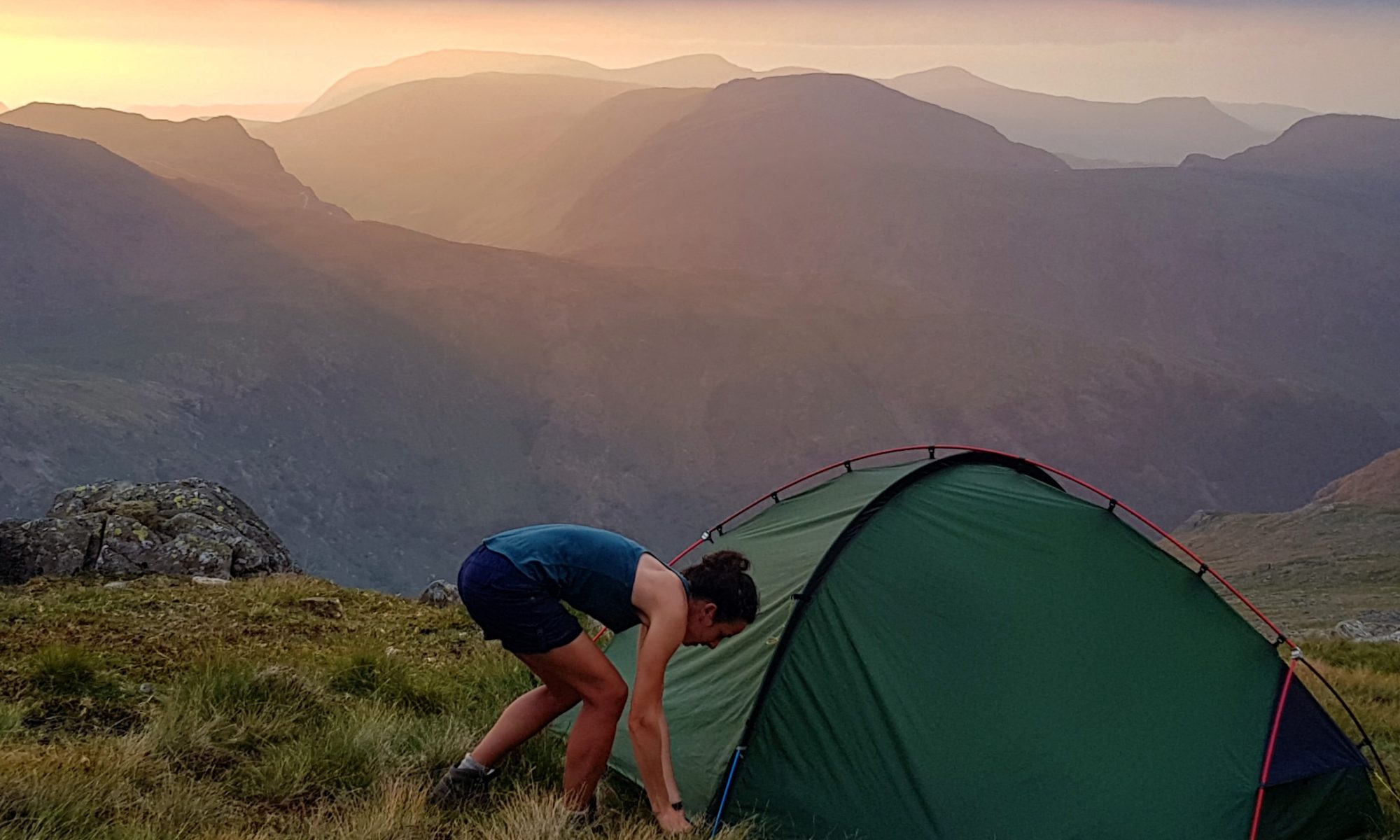 My name’s Nic and I’m an addict…..a wild camping addict. At the time of my first camp, I didn’t realise how Wild Camping Lake Distict Fells would become such a big part of my life.

I popped my wild camp cherry in the Lake District in 2017. On a misty, moody day, I kayaked across Ullswater to Norfolk Island. Not appreciating what I was letting myself in for, it was a rough, windy night and I didn’t sleep a wink. But boy did I love every second of it.

Later that same year I started bagging the Wainwrights. Starting on Great End and finishing on Pavey Ark, I walked them all in exactly 365 days. Bagging all 214 Wainwrights during my days off work and using virtually all of my annual leave.

In order to bag the mountains efficiently I started creating my own multi-day routes and planning wild camps along the way. Most of the time I scouted out my sleep spot on the fly, but sometimes I saw a place in advance and made a beeline for it as part of my route. Wild Camping Lake District Fells 18 times during my challenge was a great enabler to walking wild and wonderful routes.

I loved everything about it. The planning of the routes, refining my camping gear, reacting to the weather, camping alone, embracing bivvying and sharing the experience with good friends.

Black Fell was the first of the 12 most southerly Wainwrights that I hiked over 3 days from east to west with my partner James. We enjoyed glorious sunset views over the Langdale Pikes and cracking sunrise reviews over Windermere from the summit of Black Fell, where we camped side by side in our bivvy bags on firm grass.

I decided to get some winter hiking experience in by Blencathra during a deep freeze in early 2018. Two friends and I hiked up to Scales Tarn where we pitched our tents in the dark on the edge of the tarn. By morning we scrambled up Sharp Edge and bagged the Wainwright. I was nervous going over Sharp Edge in winter conditions and I was thankful for the support of Carl and Matt.

My friend Rory bagged his last Wainwright, Cat Bells in the summer of 2018, and invited me along! Attending his final Wainwright was a pleasure and the conditions couldn’t have been more perfect as we ascended. Myself and a few friends camped just off Cat Bells, setting down a few bivvy bags and one small tent just off the summit. The following morning we hiked Castle Crag, Eagle Crag and Sergeant’s Crag before hitchhiking back to Keswick.

I have once visited the Priests Cave on Dove Crag during the day, but on this occasion James and I attempted to find the Priests Cave after dark. Could we find it? No we couldn’t! We scoured the hillside with our head torches until 1am before resorting to bivvying on a patch of grass on the hillside. Luckily the weather was good and the morning view as I drank my coffee was delightful! I reached the summit of Dove Crag in the morning.

I noted earlier that Black Fell marked the beginning of a 12 Wainwright bagging spree, well Dow Crag marked the close of the 2nd day of that three day expedition. The 2nd night was much colder than the previous night. James and I bivvied on the ridge line after the summit of Dow Crag and were treated to a glorious sunset over neighbouring peaks.

I hiked Glaramara as part of a multi day route bagging 6 Wainwrights. Starting in Seathwaite and ending in Stonethwaite, my friend Adam and I left a car in either village. A dark cloud chased us to Glaramara and we felt lucky to set up the tent in time before bad weather hit. Remarkably it stayed dry all night and we fell asleep to the sound of Herdwick sheep munching the grass around the tent.

I had a great cock up on Great Cockup! Yes it’s true, I lost my mobile phone for 15 minutes just off the summit of Great Cockup as the sun was going down. So I channelled my inner Jeffery Deaver (crime author who writes about crime scene investigation and ‘walking the grid’ of a crime scene looking for clues) and I walked the grid of the hillside until I found it nestled in the grass. I’ve always been much more careful with my gear ever since! I slept soundly, alone in the shadow of Skiddaw before walking to Meal Fell, Bakestall and Great Calva the following day.

James and I slept on Hallin Fell on the night of Wild Night Out 2018. We slept in our bivvy bags overlooking Ullswater after racing up to the Lake District following the birthday party of our good friend Saul in Wales. As it was a popular night to be wild camping and good clear conditions, we weren’t alone – but we found a nice quiet spot just off the summit to enjoy our bivvy.

Helm Crag was my 8th Wainwright fell in an epic 13 fell multi day solo walk. Beginning in Glenridding and finishing in Grasmere, the route involved hitchhiking back to my car in Glenridding. I wasn’t an experienced scrambler at the time so was petrified climbing the Howitzer on the summit of Helm Crag but I was so proud of myself for trusting my instincts and going for it. I then bivvied in the shadow of the rocky pinnacle before continuing my journey the next day.

A late winter ascent to Red Tarn was icy and cold! The new tent that my friend Carl and I were using suffered a snapped pole and it was so cold that everything was freezing. It was nearly appropriate to bail on the camp but we patched up the pole and made it through the night to summit the mountain via Swirral Edge the next day, descending on Striding Edge. That night I learned to sleep with everything in my sleeping bag – stove gas, socks and anything with a battery!

High Raise formed part of my Martindale Horseshoe round. I walked this route with James in dire weather. It rained non stop on day one and I was relieved to have packed my dry merino base layers. It was an unremarkable camp, with the tent simply acting as a basic shelter from the relentless rain.

Ling Fell was an awesome summer bivvy. After walking up Sale Fell, James and I ascended Ling Fell and bivvied overlooking a firework display in the valley. It’s amazing how small fireworks appear when you view them from above! We woke to one of the best sunrises I’ve ever seen, before leaving to hike on to Graystones.

Lingmell was my 34th birthday camp. The day began with an ascent of Kirk Fell, bagging Green Gable, Base Brown, Brandreth and Grey Knotts before the long walk to Lingmell. We stopped to eat birthday cake close to Sty Head Tarn before settling on a camp spot close to Lingmell. The group size was bigger than I was comfortable with for wild camping, but we spread our tents out and were fast asleep by 10pm. The following morning we bagged Scafell Pike, Scafell and Slight Side before descending back down into Wasdale Head.

Low Fell is a Wainwright that means a lot to me. James and I had been together a couple of months but we hadn’t dropped the ‘L’ bomb yet. He chose the summit of Low Fell to tell me how he felt about me and I’ll never forget it. With views down to Crummock Water, the romantic camp spot was as near to perfection as I would have thought possible.

Place Fell – the location of my first ever bivvy wild camp! James and I hiked up Place Fell from Patterdale one evening in the late spring. After touching the summit trig pillar we set our bivvy bags down for the night. The sunset was unremarkable and the skies were cloudy. But during the night and into the morning it cleared and we experienced one of the best sunrises. I was hooked on bivvying after this.

Sheffield Pike – symbolically it meant a lot to me to climb this mountain. I was born and bred in Sheffield, South Yorkshire you see! First bagging Glenridding Dodd on the way up to Sheffield Pike, most of my group of friends bivvied on the hillside overlooking Ullswater before waking to a glorious sunrise. A wonderful silky cloud inversion rolled off the nearby hills, the skies were a rich orange and it was magical. The next day we bagged 4 more Wainwrights before descending back into Glenridding.

I always chuckle when I think of Watson’s Dodd because I wild camped with two friends there in 2018. The first – Matt Watson and the second Adam Dodsworth… get it?! It was an unremarkable pitch location and the conditions were dry but overcast, so we experienced neither a cracking sunset nor a beautiful sunrise. The next day we walked Great Dodd, Clough Head and High Rigg. High Rigg was the last of my Central Fells as I was close to completion.

Whiteside is the only camp amongst the 18 that wasn’t above the highest boundary line. It was a long way from any dwellings though and it wasn’t safe to camp higher due to the thunderstorm that passed through during the evening. My friend Adam and I hunkered down. I had a sleepless night wondering if a) the tent was going to be struck by lightening or b) if we’d be woken and moved on by a farmer. Neither of those things happened though and we hit the summit of Whiteside the following morning.

Adventurer Nic is a Wainwright ‘Compleater’ and a Munroist. Let her know what you thought of this post by dropping her a comment.