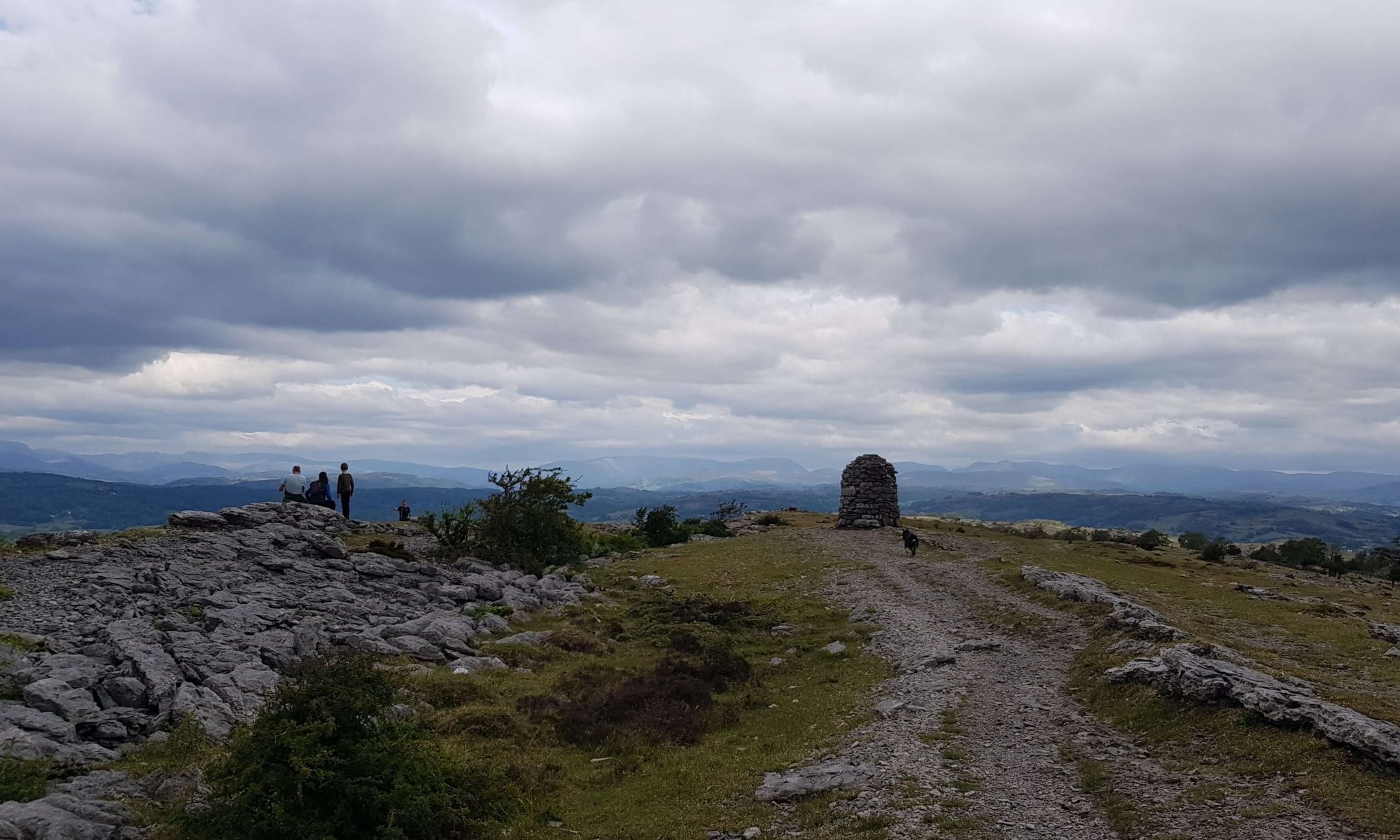 Adventurer Nic walked this route on Sunday 7th June 2020. This was Outlier number 19 of 116 for Nic. Here, she explains how you can bag this outlying fell too.

Our previous peak bagging walk was Watch Hill in the north-west Lake District, it was now time to head to the south-east.

This walk was very special for me as it was my first time meeting friends for a socially distanced walk in the wake of the COVID-19 pandemic. Katie, Laura, Aggie and Graham joined James and I at the meeting point – a large layby south of Mill Side. Three dogs also joined us for the walk – Willow, Molly and Eve.

We walked away from the cars in the direction of Mill Side before turning off to the right at a finger post. This path led up through a farm and into the woodland.

The path zig-zagged uphill before leading us out onto the open hillside.

Willow, the young cocker spaniel, enthusiastically led the way, up to the north.

The route was easy to follow and led us over solid terrain at a gentle gradient. We were chatting away, with lots to catch up on after months apart.

There were multiple cairned tops on Whitbarrow but we aimed for the furthest one, which is marked Lord’s Seat on the map.

Whitbarrow was actually made a nature reserve in 1969 by The Lake District Naturalists’ Trust (now the Cumbria Wildlife Trust). It’s a joy to walk along the ridge surrounded by sections of beautiful limestone pavement.

The ridge runs parallel to the ridge of Scout Scar – another of Wainwright’s Outlying Fells of Lakeland, which we hoped to walk the following weekend.

Upon reaching the huge cairn on Lord’s Seat, we noticed the memorial plaque to Canon G.A.K. Hervey, founder of The Lake District Naturalists’ Trust.

This is not the highest point on the fell though, that accolade goes to the rib of rock 15 metres to the southwest of the cairn. So that’s where we paused to eat our lunch.

We admired the views towards the Langdale Fells before starting our descent.

As we set off on our descent we looked back one last time at the immaculate cairn.

We descended a short distance north before peeling off to the northwest.

We reached Bell Rake and commenced a section of the path that was a bit steeper, with loose scree underfoot. There was also the opening to an eerie cave on this part of the trail.

At the bottom of the descent we turned left to head south along the woodland trails that run parallel to the ridge of Whitbarrow. These would lead us back to the cars at Mill Side.

As we entered Mill Side we passed some stunning cottages with immaculately kept gardens and vegetable patches.

Before the walk had ended we’d already made arrangements to walk together again next weekend.

Four of us went for a takeaway coffee in Staveley before James and I walked Reston Scar and Hugill Fell later that evening.