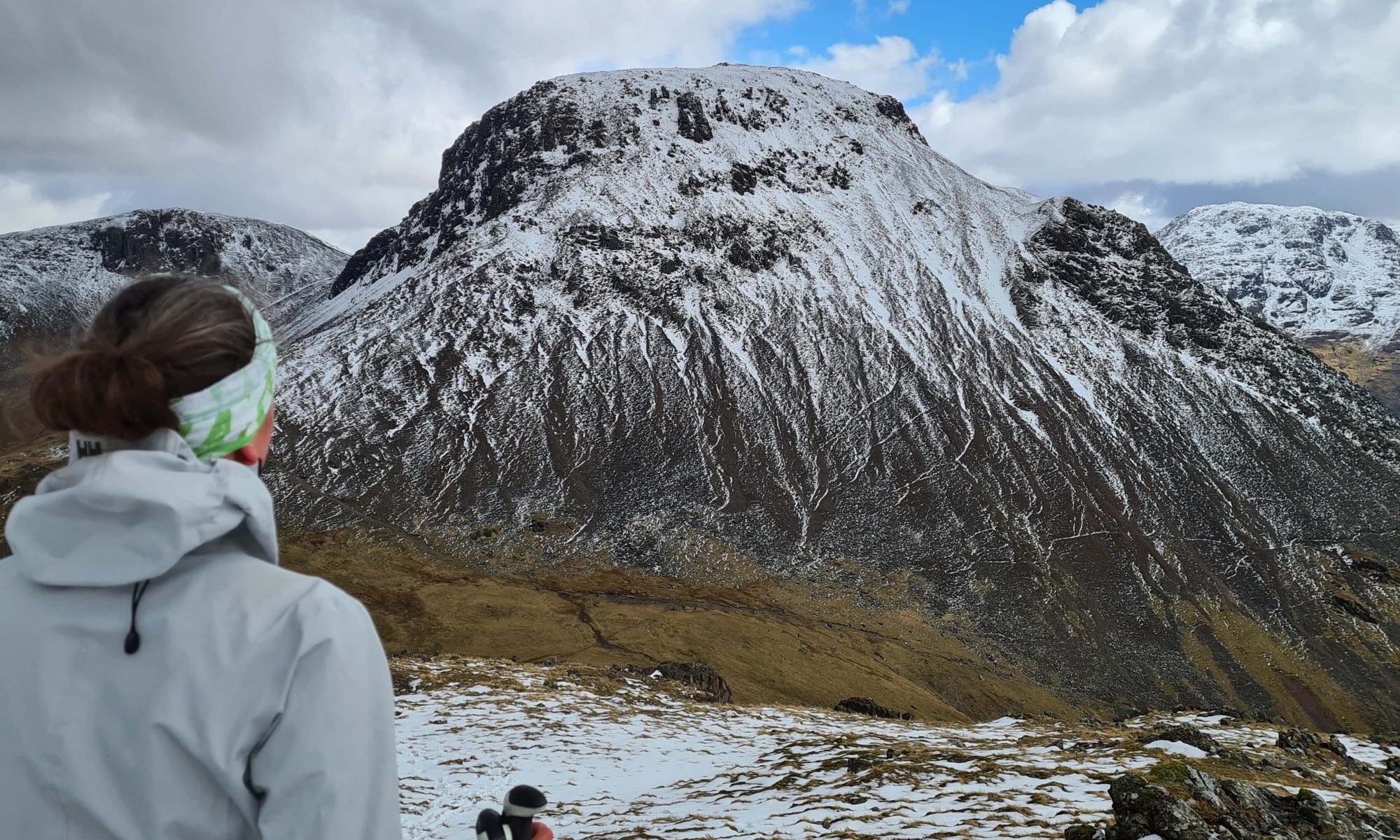 Walking the Wainwrights of the Lake District, UK is something I’ve done once before. I hiked my first Wainwright fell in 2017 and I quickly caught the hill bagging bug! I completed my first Wainwright round in September 2018 – all 214 fells in 364 days. Then, two years later I moved to West Cumbria from South Yorkshire, delighted to be closer to my beloved fells. Regular Wainwright walks were suddenly far more accessible to me.

In 2021 in the wake of the COVID-19 pandemic, I decided to embark on my second Wainwright round. A round with a twist! This time I’d be hiking them one book at a time. In the 1950s and 60s Alfred Wainwright published seven guidebooks entitled ‘A Pictorial Guide to the Lakeland Fells‘. I decided I’d hike each collection of fells together in a single continuous route, one book at a time. Seven multi-day Wainwright walks in total.

At the time, I was working three days a week in research and analysis in front of a laptop. So this left me with Friday to Monday to dedicate to my series of micro adventures. I would embark on seven Wainwright walks on my days off from work.

I planned each of my Wainwright bagging routes in the komoot app. Primarily, I used the following resources to plan my Wainwright walks –

Anyone who knows me knows that one of my favourite things to do is plan peak bagging routes. I enjoy it almost as much as the hiking itself!

Overall I would be walking over 600km and climbing over 30,000m in ascent.

Ultimately, this ‘Lake District by Bus’ approach ensured that I never had to worry about taking my car into a congested National Park during the busy Spring/Summer months.

Furthermore, travelling around the Lake District by bus also meant that I could undertake my Wainwright bagging routes in an environmentally friendly a manner as possible.

Bus Services for Walking The Wainwrights

The bus services I used to service my Wainwright routes were –

The X5 and X4 were always my first buses which led out of my home town of Cockermouth, Cumbria to the hub of the Keswick Depot bus station or the Penrith Depot bus station. From either of these points I could connect to the rest of the Lake District. Luckily, the X5 and X4 buses also took me directly to the Northern fells.

The 77 and 77a buses transported me from Keswick to both the North Western fells and the Western fells. This service follows a gorgeous route down Borrowdale alongside Derwent Water.

The 508 bus from Penrith allowed me to access the Eastern fells and Far Eastern fells via Ullswater. A really pretty route down the side of the lake.

The 555 bus from Keswick to Rydal transported me to the start of the Central fells route. This is a fantastic route down by Thirlmere via Grasmere.

The 505 bus allowed me to get back from the Southern fells by taking me from Coniston to Ambleside. From there I could get the 555 back to Keswick and the X5 home.

In conclusion, I highly recommend using the Stagecoach bus services of Cumbria to explore the Lake District National Park.

In the main I found the buses to be punctual.

The drivers were super friendly and helpful which always made me smile.

Seeing the Lake District from the top deck of a bus is very relaxing and the time flies.

I actually fell asleep on one of the buses which shows how comfortable the journey was.

Moreover, most of the buses have USB charging points.

This means you can charge your phone whilst you travel the Lake District by bus which I found very useful.

I was always taking lots of photographs along my journey and so the extra opportunity to recharge my phone battery along the way was handy.

On the other hand, a pitfall of the 77a route in particular is that the service regularly has to be cancelled during the busiest weekends of the year. This is due to inconsiderate car parking on the single track roads around Catbells. Unfortunately, this does lead to bus using hill walkers getting stranded at the wrong end of the valley. Luckily, the service wasn’t disrupted during my visits. Finally, it’s also worth noting that this service does not operate during the winter months.

The Lead Up to Walking The Wainwrights

I prepared for this walking challenge by meticulously reviewing my walking kit and making refinements. In addition, I went over the Wainwright routes with a fine tooth comb multiple times before locking them in. It was important for me to ensure I was using all available paths, reducing the pathless elements of the routes to a minimum as I knew that would slow me down. Furthermore, I wanted to avoid private land and wall/fence hopping which is often associated with long distance hill bagging challenges.

My fitness was on the low side before the walking challenge began. We had just come out of another national lockdown and I hadn’t been out in the mountains regularly. I knew I wanted to start with one of the shorter Wainwrights routes. As a result, I decided on the Northern Fells.

The Northern Fells – Walking The Wainwrights

I walked the 24 Northern Wainwrights over three days in April 2021 starting at the Keswick Depot bus station in Keswick and hiking Latrigg first. The route ended with Souther Fell and finished at the Mungrisdale Road End bus stop on the A66. The whole Northern fells route was 79.5km in length.

The Eastern Fells – Walking The Wainwrights

I walked the 35 Eastern Wainwrights over four days in April 2021 starting at the Kirkstone Pass Inn bus stop on the Kirkstone Pass and hiking Red Screes first. The route ended with Little Mell Fell and finished at the Longthwaite Road End bus stop near Watermillock. The whole Eastern fells route was 96.4km in length.

The Central Fells – Walking The Wainwrights

I walked the 27 Central Wainwrights over three days at the end of April 2021 starting at the Rydal Church bus stop in Rydal and hiking Loughrigg Fell first. The route ended with High Rigg and finished at Dale Bottom bus stop near Keswick. The whole Central fells route was 71.6km in length.

The Western Fells – Walking The Wainwrights

I walked the 33 Western Wainwrights over four days in May 2021 starting at the Honister Youth Hostel bus stop at Honister Slate Mine and hiking Grey Knotts first. The route ended with Fleetwith Pike and finished the circular at the same Honister YHA bus stop. The whole Western fells route was 99.5km in length.

The Southern Fells – Walking The Wainwrights

I walked the 30 Southern Wainwrights over four days at the end of May 2021 starting at the Stonethwaite Road End bus stop in Borrowdale and hiking Bessyboot (Rosthwaite Fell) first. The route ended with The Old Man of Coniston and finished at the The Ruskin Centre bus stop in Coniston. The whole Southern fells route was 102km in length.

I walked the 29 North Western Wainwrights over three days in June 2021 starting at the Rosthwaite General Store bus stop in Rosthwaite and hiking Castle Crag first. The route ended with Sale Fell and finished at the Dubwath (Junction with A66) bus stop in Dubwath. The whole North Western fells route was 73.9km in length.

I walked the 36 Far Eastern Wainwrights over four days in June 2021 starting at the Patterdale Hotel bus stop in Patterdale and hiking Place Fell first. The route ended with Troutbeck Tongue and finished at the Town End bus stop in Troutbeck. The whole Far Eastern fells route was 99.4km in length.

Walking the Wainwrights and accessing the Lake District by bus was a really fulfilling experience. In short, my Wainwright walks were slow enough to truly appreciate the views and catch up with friends but fast enough to feel like a properly challenging series of walks.

Adventurer Nic is a Munroist and double Wainwright ‘Compleator’ who in 2020 hiked a piligrimage from her birthplace of Sheffield to her home in West Cumbria. Let her know what you thought of this post by dropping her a comment.

2 Replies to “Walking The Wainwrights – A Book-by-Book Adventure”