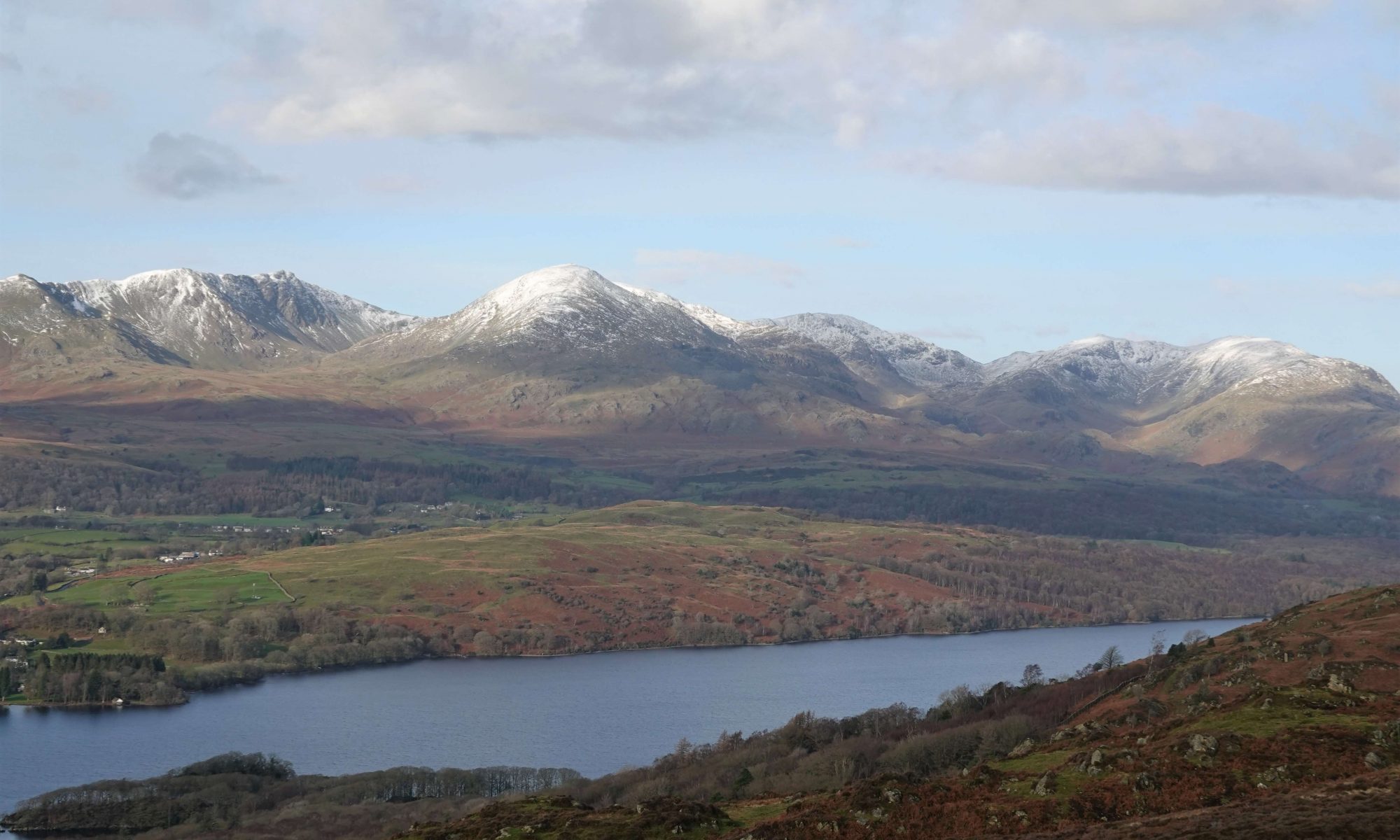 Top O Selside and Carron Crag are two routes featured in Alfred Wainwright’s book – The Outlying Fells of Lakeland. The original routes take in 5 tops in the south of the Lake District National Park. This route card mashes the two routes together into one longer route and is a fantastic option for someone peak bagging the Outlying Fells of Lakeland.

Adventurer Nic walked this route on Saturday 5th December 2020. These were Outlier numbers 90 to 94 of 116 for Nic. Here, she explains how you can bag these outlying fells too.

It had been a couple of months since my last Outlying Fells of Lakeland walk which was Great Worm Crag, The Pike and Hesk Fell back in September. It was now early December and the Lake District had experienced it’s first snowfall of the winter season.

My boyfriend James and I decided to hike Carron Crag and the Top O Selside fells on this sunny Saturday from Grizedale main car park.

We left the car park and headed west down the side road following a sign to Grizedale Forest Office. Crossing over the bridge and passing a farm, we peeled off the track to head uphill on a bridleway.

We found ourselves following a moss covered dry stone wall. Part way along the wall we were very surprised to see some graffiti art. These painted bricks featured the logos of common outdoors brands.

We kept to the left until the bridleway joined a much wider track, we turned right onto this and walked for around 200m before taking the first left uphill.

On this route, we passed one of Grizedale forest’s many sculptures entitled RUUP – from ‘ruupor’ which translates to ‘megaphone’ in Estonian.

The three sculptures were designed by Birgit Õigus and placed on the Carron Crag trail through the forest. As the artist’s aim was to encourage folk to stop and listen to the woodland sounds, we did just that.

After our spot of forest bathing we continued on the trail before turning right at the cross roads at the top onto a tarmac track. We then took the second left onto a stony path.

We followed the trail all the way to another sculpture of Grizedale forest.

This time it was a 1997 sculpture by Linda Watson entitled 17 Degrees South.

We continued uphill until we reached the short scramble onto the summit of Carron Crag.

Here we enjoyed views over the forest to the Coniston fells which looked like they’d received a nice sprinkling of snow.

We also noticed Helvellyn to the north was completely white!

My technique of choice coming off Carron Crag was the trusty bum shuffle! With my feet firmly back on the ground we continued in a northerly direction on a stony path which led us downhill.

This merged onto a wider track where we turned left to continue heading north through the forest. After 1km we turned left again onto another wide forestry track which led south west.

Continuing on the main track, we walked until Coniston Water appeared to our right with the fells rising up behind. It was a gorgeous view.

Following a fingerpost signed to ‘Parkamoor’, we turned right off the main track and into dense woodland. Despite the closing in of the trees, the trail was firm and obvious and I actually really enjoyed this section of the route. I love the smell of woodland and it was super strong here.

We passed through a gate which led out of the woodland and onto open terrain.

The views to the Coniston fells were now completely unimpeded by the forest as we stood and admired the view from Park Crags.

We continued straight ahead, all the while our eyes were drawn to Top O Selside in front of us. Passing through another gate, we continued over the grassy trail which led to Parkamoor House ‘the cottage in the clouds’ which is a beautiful ‘off grid’ cottage which appears available to rent.

We passed through another gate and followed the trail to the right as it skirted around the base of Top O Selside along it’s western flank.

We looked behind us to appreciate the beauty of the cottage from the opposite side, together with the trail that had led us to this point.

A post in the ground marked the left turn required for us to start heading towards High Light Haw.

A grassy path led uphill and then forked right to head south. At this point in the walk the trail becomes rather boggy and indistinct in parts as it undulates towards the higher ground.

We stopped for a cheese and pickle sandwich on a couple of rocks beside the trail here.

After lunch we kept following the trail south, ultimately peeling off the path when we had High Light Haw in our sights.

The summit of High Light Haw was simply beautiful.

The views were stunning. Not only did the Coniston Fells look fantastic, but the triangular summit of Harter Fell looked charming.

Black Combe rose to mark the most southerly point of Copeland.

I could also see all the fells around Beacon Tarn and down to Blawith Knott and Burney which was one of my favourite Outlying Fells walks of 2020.

We passed a cairn on the way towards Low Light Haw and followed the trail down to the col between the two outlying fells.

There were plenty of faint paths to follow but we mainly judged it by eye and weaved our way through the bracken and heather to reach the summit of Low Light Haw.

The summit of Low Light Haw was marked by a cairn and the view was very similar to that of High Light Haw as the tops are a mere stones throw away from each other.

It was here that we observed a pack of hounds participating in a nearby hunt.

There are many gaps in the wall. We simply picked a gap, stepped through and made our way to the summit.

Many people bagging the Outlying Fells of Lakeland seek out Wainwright’s tops, others are happy with the true summits of each fell (the highest point). In this case we bagged the highest point but the Wainwright summit can be seen in the photo below.

We headed down from the summit in a southerly direction in order to pick up a path which led through a substantial gap in the wall.

We then followed the trail down through bracken to a crossing point of Caws Beck.

We picked up the trail on the other side and hiked alongside a wall.

Even from here, the Consiton fells commanded our attention. The scene was very autumnal in the foreground and wintery in the background as we looked across at Low Light Haw.

At the wall corner, the trail continued to head north towards Top O Selside.

We followed a variety of sheep trods which varied in quality as we continued north over undulating terrain until we reached the cairned summit of Top of Selside.

The last fell of the day always feels super special to me as the sunlight tends to be low and really magical. I had a real moment as I sat on the edge of the summit cairn.

I breathed in deeply with the winter sun kissing my cheeks and really felt happy to be outdoors in my beloved Lake District.

For the descent of Top O Selside, we headed off piste through tufty grass aiming for the path crossroads around three quarters of a kilometre away to the north.

At the cross roads we went straight on towards the woodland in a north easterly direction. It was very wet underfoot here but we just about kept our feet dry hopping over the deeper sections of bog and puddles.

We passed through a gate and continued walking through the woodland to the north east.

At the next trail junction we turned left and then went straight on at the next crossroad which was almost immediate.

At the next T junction we turned right and then immediately forked left onto a small path through the woodland.

At the next two crossroads we went straight on and then retraced our steps back to the car from here.

What next? Heughscar Hill and Dunmallard Hill beckoned. These would be my next two Outlying Fells.