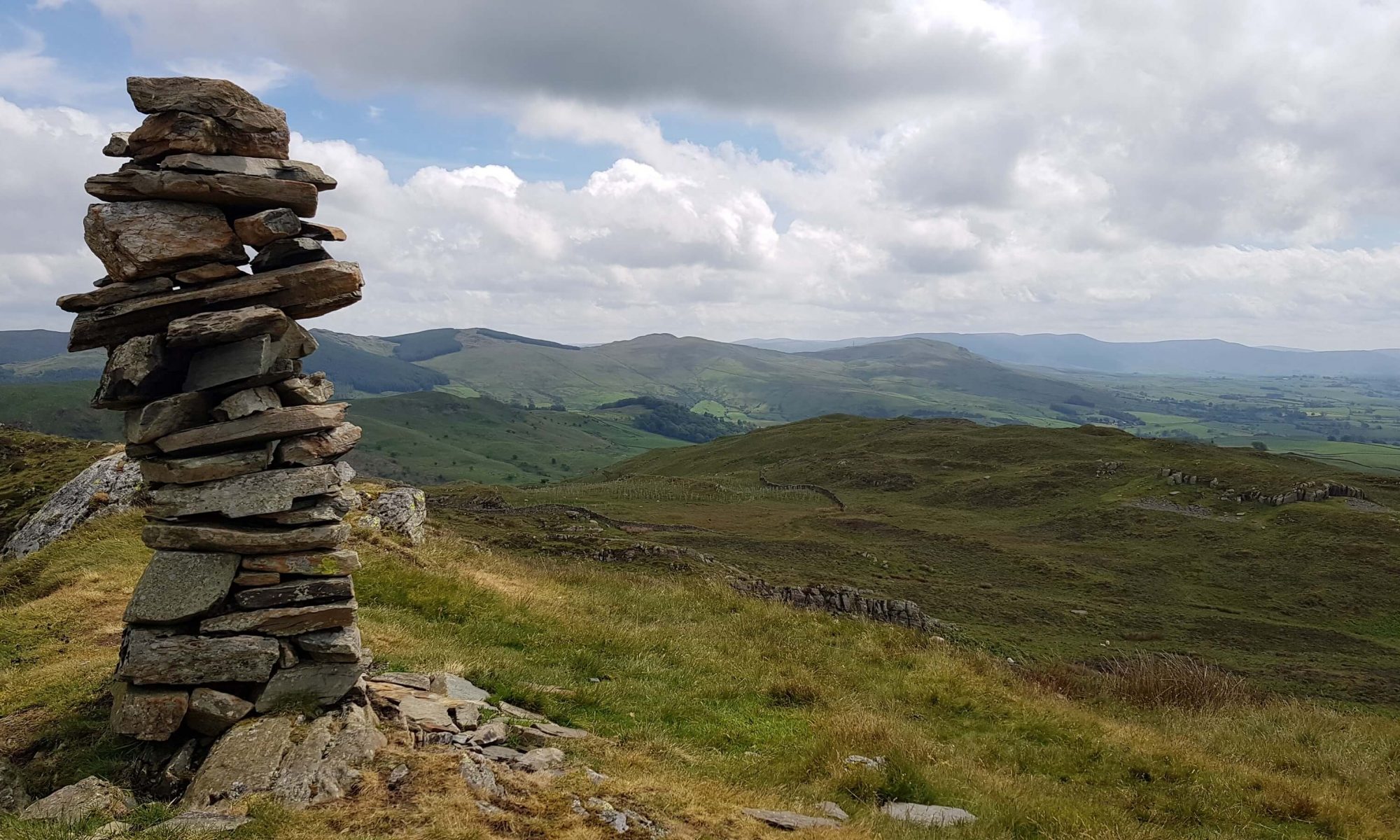 Adventurer Nic walked this route on Saturday 20th June 2020. These were Outlier numbers 29 to 37 of 116 for Nic. Here, she explains how you can bag these outlying fells too.

The Lead Up to the Bannisdale Horseshoe

The previous week we had walked Black Combe, White Combe and Stoupdale Head in the south west of the Lake District National Park on our quest to hike the Outlying Fells of Lakeland.

Today James and I were meeting our good friend Liz, a nurse who lives over the border in Yorkshire.

There is limited parking for the Bannisdale Horseshoe but we managed to park near Plough Farm.

To start, we walked south-east down the road before turning right towards Mosergh Farm.

Just before we reached the farm we turned right again to follow a track which was lined by dry stone walls on either side.

The wide track was easy to follow. Its end marks the start of the open access land and a series of faint paths lead uphill through grass and bracken towards the summit of Whiteside Pike.

The summit cairn of Whiteside Pike was visible from quite a distance due to its height.

A short steep section at the very end enabled us to access the highest point of the fell, we looked back to a gorgeous view of Brunt Knott.

On the summit of Whiteside Pike was a columnar cairn which was higher than my shoulder. A very impressive stack indeed.

As we left the summit of Whiteside Pike, we looked ahead towards Todd Fell, our second peak on the Bannisdale Horseshoe. We could see Todd Fell on the left and Capplebarrow on the right, separated by a wall.

There was a stone stile in the wall at the bottom between Whiteside Pike and Todd Fell.

We headed north-west making a beeline for the summit of Todd Fell.

The summit was marked by two very small rocks that could be easily missed.

We started a debate amongst ourselves trying to identify the high fells in the distance, beyond the picturesque Long Sleddale Valley. There was one that looked very much like Great Gable, but from this angle it looked suspiciously far away from the Scafells. But none of us could think of an alternative!

We mused over the Great Gable conundrum as we made our way off Todd Fell, aiming for a ladder stile in the wall that separated us from Capplebarrow.

After crossing the stile we hiked onwards and upwards, through a gate which looked like a new addition.

By the time we reached the summit of Capplebarrow we were certain we could see Great Gable and made a note to check the map properly when we got home.

From Capplebarrow we followed the long fence on towards the next summit of the Bannisdale Horseshoe.

It’s quite difficult to work out why Alfred Wainwright went out of his way to include ‘nameless’ summits in his walks for the book – The Outlying Fells of Lakeland. Together with their height, in feet, he lists them under the shared name ‘nameless summit’. There are three of them on the Bannisdale Horseshoe.

As we approached nameless summit 1819′ we looked back to see the two prongs of the horseshoe with Bannisdale valley a chasm between them.

In the spirit of being able to remember the nameless summits, it seemed fitting that we nicknamed this summit ‘Preston Peak’ after our hiking companion Liz Preston. The view towards Skeggles Water and Green Quarter Fell was lovely.

From one nameless summit to another, we marched north towards the next Outlier.

The pointy peak of Ill Bell was the most recognisable mountain on the horizon, together with other fells from the Kentmere Horseshoe.

An old wall led us to the nameless summit 1771′ which we nicknamed Hardy Hill (after my own name).

From here we entered bog territory, but found a few rocks to sit and eat lunch on out of the wind.

We continued on hopping over the bog towards the north-east corner of the fell where two walls meet, in order to use the ladder stile. From here we could see the Shap Fells we had yet to hike over to our left.

From here we headed up in a south westerly direction to reach the summit of Long Crag.

We were in good spirits after lunch. After a weather forecast that promised a bit of sunshine, a lot of cloud and a few showers we’d only caught one short shower and were felling buoyant.

We returned to the wall junction and followed the wall to the col between Long Crag and White Howe, before peeling off to approach the summit from the north side.

White Howe was the only fell on the circuit to have a trig pillar.

The rain started just as we reached the summit and the mountains in the distance slowly started to disappear into the mist.

Leaving White Howe to the south-west, we hopped over a stile and up to next summit, another nameless one! So this third and final nameless summit adopted the nickname Forrest Fell, after James’s surname.

Forrest Fell was quite an apt nickname as the general area is marked ‘The Forest’ on the map.

We headed down from the nameless fell in a south-easterly direction.

Soon we could see Lamb Pasture, but we couldn’t summit it until we’d completed the biggest descent of the day so far.

We walked through a gate in the col and noticed a second gate in the corner to the right, so we headed through that in order to avoid having to cross the boundary further up.

We made it to the summit and the poor weather had passed once more. The sun was shining and the view down Bannisdale Valley was beautiful.

I took a well earned rest on the small summit cairn.

From Lamb Pasture, we descended down to another pair of gates and followed a quad bike trail to main track.

We reached the track at the bottom and walked along it to the east for a while before heading south again towards the road, along the right of way next to Thorn Cottage.

We walked along the road, which crossed Bannisdale Beck, before turning right onto another footpath.

This trail led us through woodland and out onto farmers fields.

By this time we were roasting hot in the sunshine.

The path exited onto the road where the cars were parked and our 18km Outlying Fell-bagging hike was over. The longest walk in Alfred Wainwright’s book – the Outlying Fells of Lakeland was complete.

Wrapping Up our Bannisdale Horseshoe Hike

What next? We walked Knipescar Common, the 38th hill of Wainwright’s Outlying Fells on our way home.

4 Replies to “The Bannisdale Horseshoe”