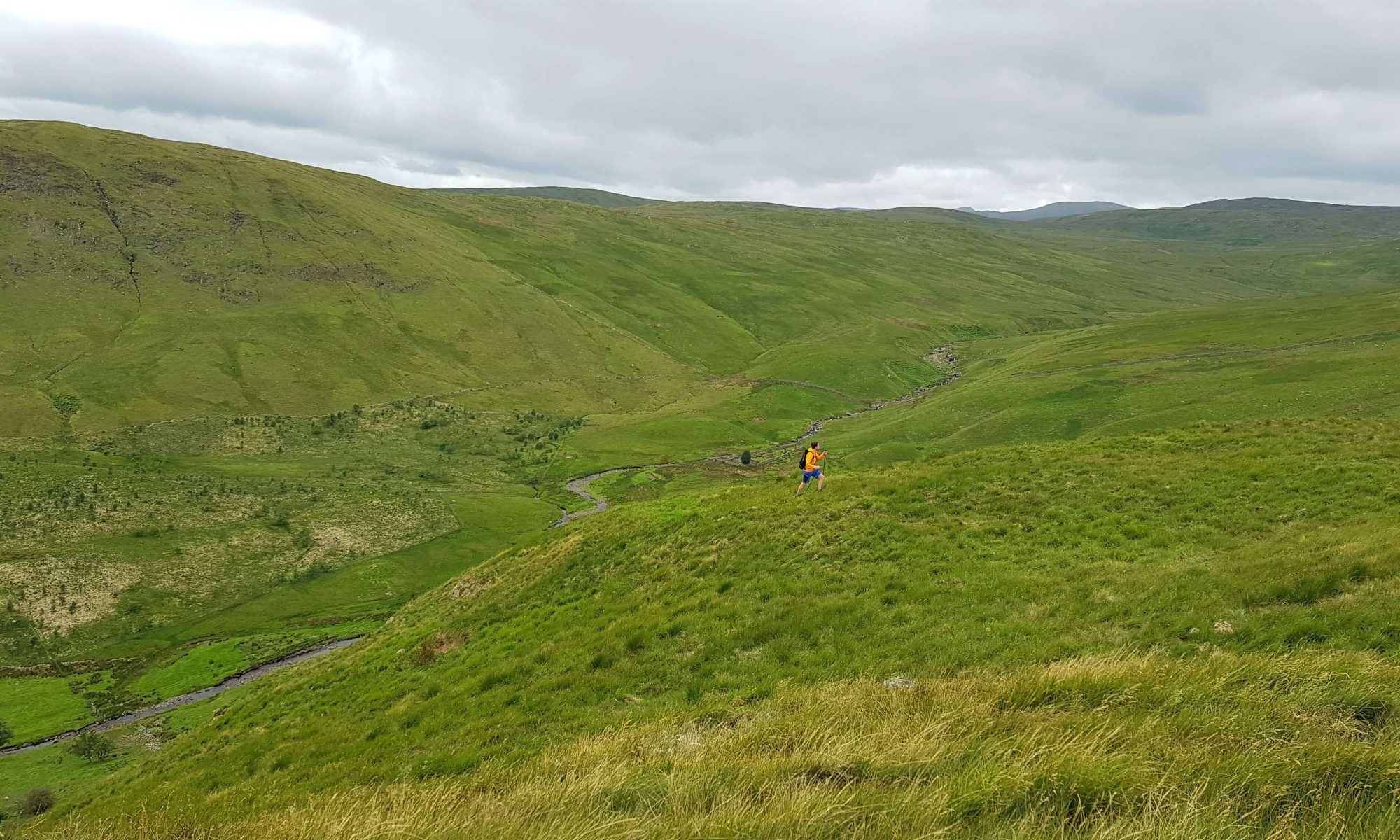 The Crookdale, Wet Sleddale and Wasdale Horseshoes in One Hike

The Shap Fells are blissfully quiet and the Crookdale, Wet Sleddale and Wasdale Horseshoes are classic hill-walking routes featured in Alfred Wainwright’s Outlying Fells of Lakeland. This route mashes the three horseshoes together to take in 10 outlying fells in the far east of the Lake District National Park. This route card is a fantastic option for someone peak bagging the Outlying Fells of Lakeland.

Adventurer Nic walked this route on Saturday 11 July 2020. These were Outlier numbers 53 to 62 of 116 for Nic. Here, she explains how you can bag these outlying fells too.

A few days earlier we’d hiked Green Quarter Fell, a short walk from the Kentmere valley. Now it was time for something a little longer. I’d studied the routes for the Crookdale Horseshoe, Wet Sleddale Horseshoe and Wasdale Horseshoe. These three walks in the Shap Fells were very close together. Consequently, I saw no reason not to combine them into a nice 20km route. We started in a large layby on the A6, just 6 miles south of Shap.

There are three large laybys on this stretch of road so finding a parking space even on a Saturday in July wasn’t problematic.

James and I left our car and walked south down the road briefly. We then peeled off through two large gates to gain access to the hills on a track heading west.

After only 250m on this track we turned left through a gate and followed the path, through farmland and a kissing gate, to cross Crookdale Bridge.

It was at this early point in the walk that we noticed a large bird of prey taking off into the air from a fence post before hovering above the ground. A majestic sight.

We could see our first target – High House Bank in front of us.

Upon crossing Crookdale Bridge we turned right to walk up alongside a derelict wall.

We soon peeled off away from the wall over pathless ground to head south-west to a more established wall running up the side of Hazel Bank.

We followed this wall until there was a gap in it. Crossing it here enabled us to make a beeline for the 495m summit of High House Bank over tussocky ground.

At the summit of High House Bank we admired views down to the Borrowdale valley with Borrow Beck running down the centre.

In the distance, the most noticeable peak was Ill Bell of the Kentmere horseshoe, seen over the top of the fells of the Bannisdale horseshoe.

We left High House Bank to the north-west in the direction of Robin Hood following a small path.

After reaching the summit and posing for the obligatory ‘Robin Hood firing an arrow’ photo, we made swift progress towards Lord’s Seat, our third fell of the day.

The valley of Crookdale separated us from the fells that we’d walk at the end of the day.

We continued walking north-west on the clear path to Lord’s Seat, making good progress whilst we still had a path to follow.

We knew we wouldn’t have the privilege of an obvious trail when we made our attempt to link the Crookdale Horseshoe to the next two sets of hills.

It was great to look back from the summit of Lord’s Seat to the fells we’d just hiked, plus we could see Whinfell ridge in the background.

At this point in the walk we left the natural Crookdale Horseshoe in order to link up with the next horseshoe – the Wet Sleddale. This involved leaving the summit of Lord’s Seat to the west, before making our way over lumpy, bumpy, rugged terrain to the north.

We stuck to our northern bearing almost all the way to Ulthwaite Rigg. The terrain was often wet, but I managed to keep my feet dry despite a few near misses. We passed a pair of large frogs who were jumping high through the grass.

The route led us uphill at first to the saddle between Harrop Pike and Great Yarlside at 560m where we crossed a wire fence, before heading downhill towards Ulthwaite Rigg (502m). This felt quite unnatural at first but there was a slight raise to the summit at the end.

The summit of Ulthwaite Rigg is largely protected by a moat of swampy, saturated ground and a bit of bog hopping was required to get to the cairn. Once there, we had our first view of the Wet Sleddale Reservoir.

From Ulthwaite Rigg we headed down to the south-east to cross the Sleddale Beck where it forks. We sat on a rock while we ate our lunch before continuing uphill in the direction of Great Saddle Crag. At this point sitting in the valley it struck me how unbelievably quiet it was. Not only had we not seen another hill walker, we hadn’t heard anything other than bird song and the soft sound from the light breeze all day.

After lunch we ascended up alongside the stream before crossing the top of Widepot Sike and up onto the summit of Great Saddle Crag.

From this point in the walk, there was a notable change from grassy, boggy terrain to bouncy heather.

We left the summit of Great Saddle Crag and headed off towards Sleddale Pike to the north-east. It was slow going through the heather and there was one wire fence to cross en-route.

We happened across an area where some trees had recently been planted and tree protector guards were in place.

On the summit of Sleddale Pike there was a thick pole in the ground.

Of all the hills on the Shap Fells route, this top had the best view to Wet Sleddale Reservoir.

From Sleddale Pike we ventured on over pathless ground south towards Wasdale Pike. We were in the heart of the Shap Fells. This point in the walk marked our departure from the Wet Sleddale horseshoe and the beginning of the Wasdale horseshoe. The distance between the two fells though was negligible, a mere 1km.

It was as we were approaching Wasdale Pike that we noticed three deer – an adult and two red deer fawns. Naturally, they ran away as we approached but it was lovely to see them effortlessly bounding over the terrain.

This point in the walk marked the end of the pathless route-finding.

A high level path led from Wasdale Pike to the summit of Great Yarlside. This would mark the highest point of the walk and the third highest of all the Outlying Fells on the list at 591m.

We followed the path alongside a fence up to a corner. Here, the fence met another boundary, just short of the summit of Great Yarlside. We crossed over this and marched the short distance to the summit.

The Coniston Fells were just visible in the distance.

We spotted an old trigonometrical survey station in the ground just as we were leaving to head for Little Yarlside along the path to the south-east.

There is some confusion as to whether or not the summit of Little Yarlside is on the left or right side of the wall. Alfred Wainwright himself placed it on the left side, while our hill-bagging app described it as a ‘ground by shallow pit’ on the right hand side of the wall. In all fairness, I don’t think it matters greatly.

From this part of the Wasdale Horseshoe we had a good view down to Crookdale Beck. The view to the fells we’d hiked that morning was also lovely.

From the summit of Little Yarlside, we continued on the right side of the wall to a col. It was from there that we continued uphill to the top of Whatshaw Common, our tenth summit of the day.

We proceeded to descend to the west alongside a fence and wall. There were paths on either side so we were uncertain which would be best. We picked the right-hand side. In hindsight, the left-hand side would have been better as we had one more boundary to get over towards the bottom which was a tad awkward.

This returned us to the three gates we’d passed through at the beginning of the walk and we retraced our steps back to the car.

I prioritised some family commitments before returning to hike more of Wainwright’s Outlying Fells of Lakeland a week later, starting with the Naddle Horseshoe.