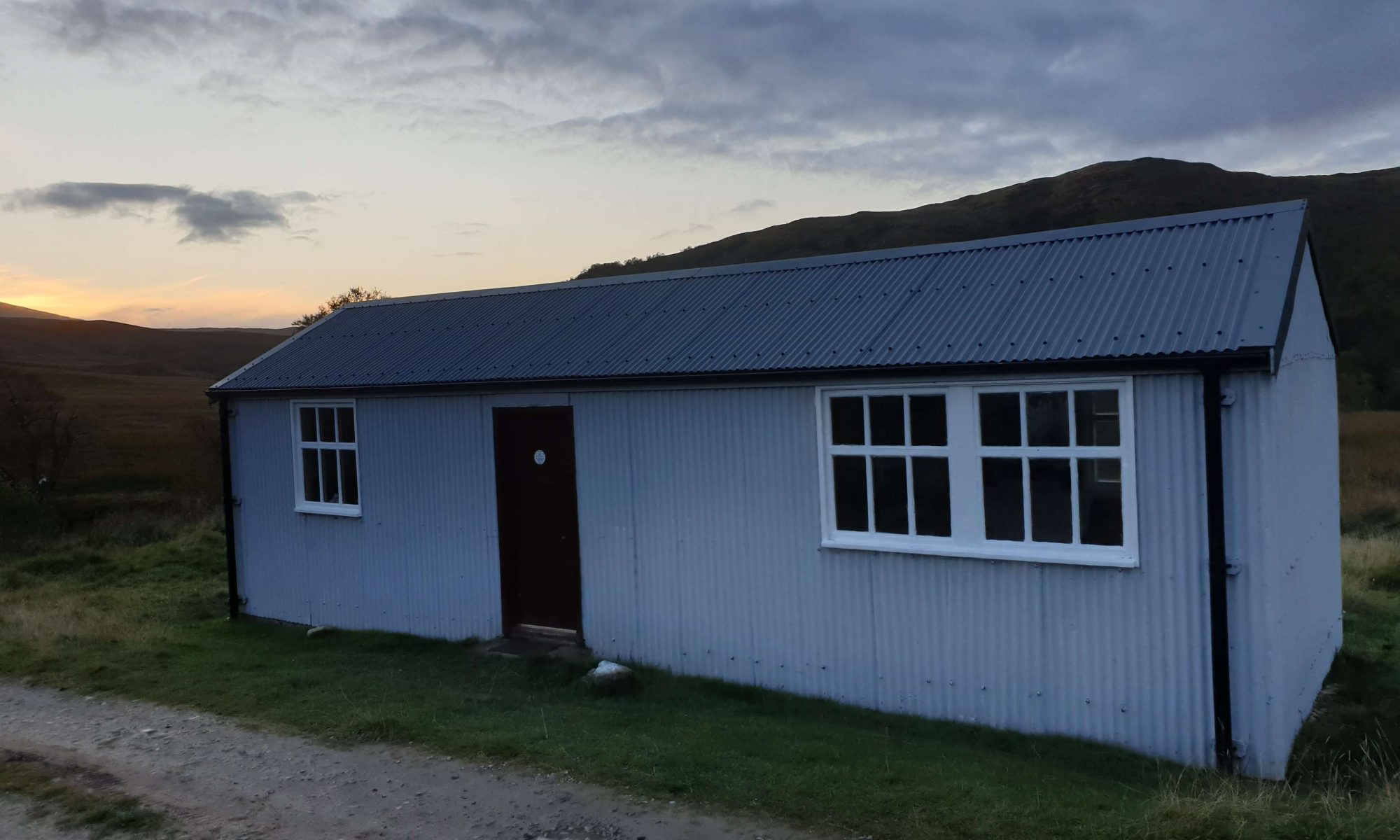 Seana Bhraigh is a remote Munro in the north of Scotland. This route card explains the quickest and easiest way of getting to the summit for a peak bagger.

Adventurer Nic walked this route on 4th October 2019 as part of her Munro Bagging Challenge. It was Munro number 265 of 282 for Nic. Here, she explains how you can bag this Munro too.

Three days earlier we’d bumped into a chap named Phil on our descent of Beinn Dearg. He happened to be the MBA Custodian for Shenavall bothy near the Fisherfield Munros and he recommended we stay at The Schoolhouse Bothy before our ascent of Seana Bhraigh. This was a chance encounter and boy did his advice pay off!

One room of the bothy was occupied when we arrived, by a couple with two dogs. So we slept in the old classroom, which had a chalk board, a couple of old school desks and even a complete works of Shakespeare!

Of all the bothies we stayed in during our challenge this one was probably the most quirky. It used to be an actual working schoolhouse up to 1930, with only one classroom and then a school teacher who lived on site. The children walked for miles from within the Easter Ross glen and reportedly wore stilts to cross the river! Kids really don’t know how good they’ve got it these days!

When I awoke from a very deep sleep on the morning of 4th October 2019. We snoozed the alarm a couple of times before getting up and vacating the bothy. Due to the wonderful night’s sleep we were very tempted to stay again after our ascent of Seana Bhraigh, but we packed up in case we changed our minds.

We followed the gravel estate track which led to the Corriemulzie walkers car park, where we would start the walk.

From the car park we took a track through the Corriemulzie cottages, through a gate and pretty much followed a river all the way into the valley for 8km. The view of the mountain with its dramatic pinnacles on the left and the calmer hill walkers route on the right was stunning. A rainbow appeared in front of the track as sunshine and showers developed into the theme of the morning.

We got to the first river crossing and crossed successfully on boulders. When we had to cross the Corriemulzie river for a second time it was more difficult. We decided to take our boots and gaiters off and cross barefoot. The pebbles were sharper and mossier than previous river crossings and the water was cold but our feet soon warmed up again once we got our socks and boots back on and started walking.

We followed faint paths onto the open hillside, along the side of a burn in a ravine and then up onto the ridge. It was good underfoot, with lots of ledge-like steps of grass and rock. It felt like we were ascending quite quickly despite our cumulative challenge tiredness.

The weather was worsening though. The wind picked up on the hillside and it was very blustery. We paused momentarily behind a rock to eat a snack but we struggled to find somewhere better sheltered. We carried on up the ridge to a small lochan at 743m before heading up the final ascent. It must have been gusting up to 50mph at times.

The Summit of Seana Bhraigh

We made it to the summit and sat in the relative comfort of the wind shelter as we checked the weather forecast for the upcoming days.

The Munros to the north and west of Loch Monar were next on the agenda.

It would take us two days and with a mixed forecast, we asked our good friend Sally if we could stay at her house in Drumnadrochit afterwards.

If Sally said yes, then we could take another couple of days of battering by the weather if it meant there was a warm, welcoming cottage, a cuddle from a good friend and her dog at the end of it.

Sally said yes almost immediately, so that was it, our plans were set in place. She’s such a legend.

It was also on the summit of Seana Bhraigh that I agreed with Lara (the Chair of Edinburgh Young Walkers) that I would speak about my challenge at their upcoming AGM on 7th November. As the challenge was coming to a close, opportunities like this were starting to present themselves and I was getting excited about sharing my story.

On the descent we started to feel a less trepidation about the coming days. We retraced our steps back to the river, crossed it again and walked the long long path back to the car.

We adopted a good pace which meant we could get to the bothy early to secure sleeping platforms and enjoy a restful evening. It was a relief that the valley blocked much of the wind.

Two stags passed on the track in front of us and headed down to the river. They galloped straight through it and went up the hillside on the other side, all within seconds. They move at remarkable pace. Just as we went through the gate to the lodge, a stalkers land rover was coming down the track behind us. Phew! We felt the stag (and us) had a lucky escape.

We arrived at the bothy to find it empty, so we chose the room to the left of the main door this time, in case a bigger party arrived to use the classroom. We checked ourselves for ticks, had the usual baby wipe shower, made a delicious brew and ate some snacks.

Sometimes during the challenge it really did feel like we were winning and this was one of those moments. I actually did half a crossword that someone had left in a magazine, before writing in my diary and tidying my kit. A very productive hill bagging day!

We nicknamed this particular Munro ‘Sean’s Bra’ – find out why we nicknamed all 282 Munros here.