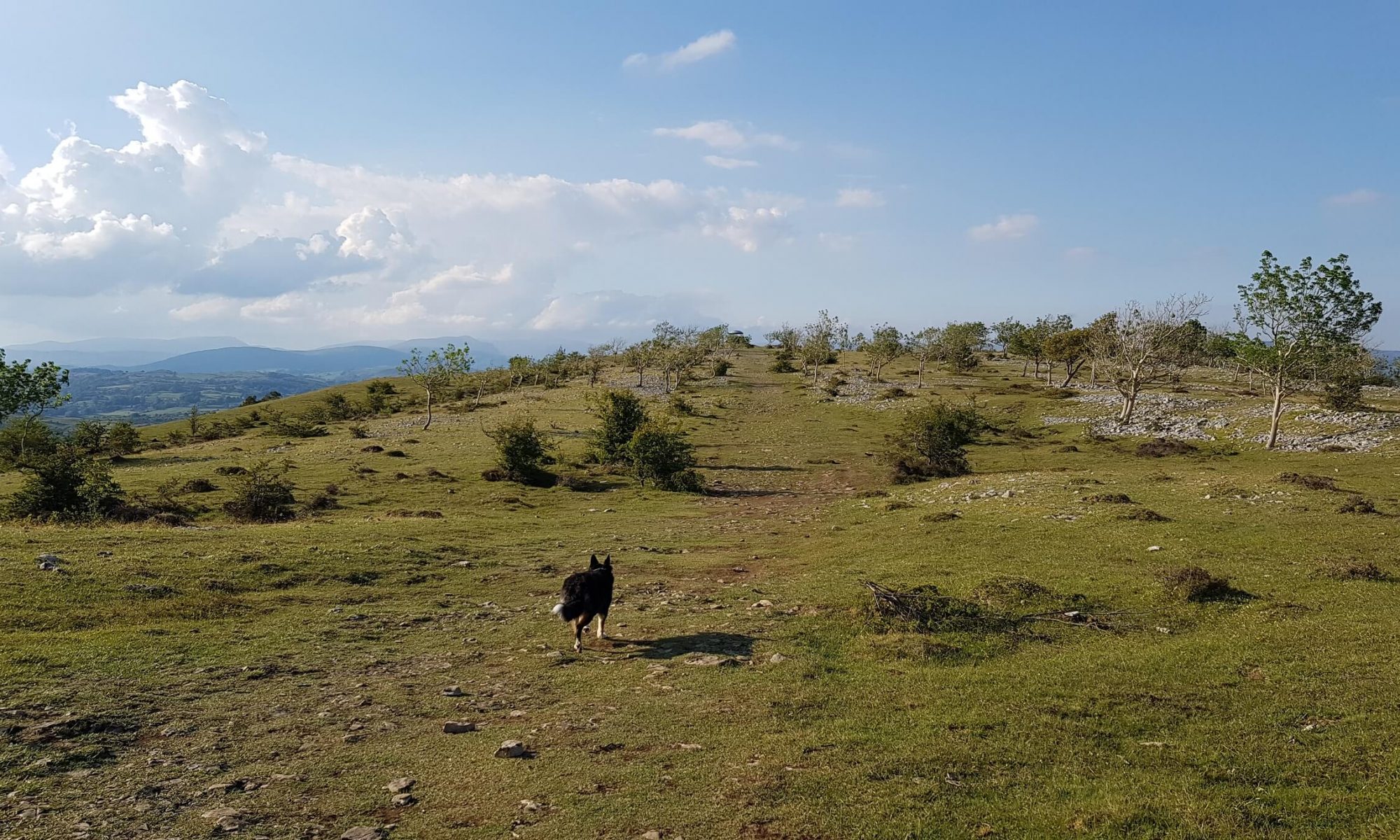 Adventurer Nic walked this route on Saturday 13th June 2020. These were Outlier numbers 24 and 25 of 116 for Nic. Here, she explains how you can bag these outlying fells too.

Earlier that week we’d hiked Caermote Hill in the north-western Lake District on our mission to hike all the Wainwright Outlying Fells during the summer of 2020.

We agreed to meet friends local to Kendal for a walk in the south-east so these two nearby fells fit the bill nicely.

The handy car park, high on Underbarrow Road meant that there wasn’t much ascent to the route, but we extended the walk to include the full ridge of Scout Scar to make a great 10km circuit.

We met our friends, Laura, Chris and Aggie and three dogs Willow, Molly and Eve, and set out.

Kendal local Aggie took the lead as we hiked up from the car park through a small section of woodland before a gate led us out onto the open hillside.

There are many trails that run along the wide ridge to the summit and they are popular with runners, dog walkers and hikers.

Alfred Wainwright described this walk as ‘A walk above others: a pleasure every step of the way’ in his book, The Outlying Fells of Lakeland.

We continued north towards the summit. It’s near impossible to get lost here as the summit is on an (almost) perfect northerly bearing.

The cairn on the summit is particularly wide as cairns go!

Molly the cocker spaniel was keen to pose for a photo with me by the summit cairn.

In the distance, we could just make out the higher fells of the Lake District. Jagged and pointy peaks like Crinkle Crags, Great Gable and the Langdale Pikes stood out the most.

We made a variation on the route back towards the car park.

A very attractive wall ran along the east of the ridge. We walked alongside it for a while before we looped back to the gate into the woods.

The woods led us back to the car park, but our walk wasn’t over yet!

We crossed the road and walked along it for a short distance to a large gate which led to the ridge of Scout Scar.

As with Cunswick Scar, this fell had a variety of route options along the ridge.

We chose the path that hugged the western edge of Scout Scar.

There was a steep cliff drop to our right as we walked along the ridge. Set into the cliff were thick trees so you can never quite see the bottom.

In the distance we could see Whitbarrow, another of the Outlying Fells that we’d hiked the previous weekend. It is an almost identical limestone ridge running parallel to this one. Anyone who likes one walk will almost certainly enjoy the other.

Beyond that we could see Morecambe Bay.

We then rounded the corner at the end of the ridge and walked along the eastern side beside another attractive wall.

We visited the trig pillar on Scout Scar but continued on towards the large shelter, a bit further up.

Upon reaching the summit we had a sit down in the shelter.

The shelter was put up in 1912 and is a memorial to King George V.

It used to have a view finder, to help hikers appreciate the views around them, but sadly it was vandalised and removed.

The summit shelter is fondly referred to as The Mushroom, as it resembles the fungi in shape.

The Descent of Scout Scar

It was a very short descent back to the car from the Mushroom.

Our great afternoon walk was topped off with pizza in our friend Katie’s garden in Kendal. We left Kendal late in the evening with smiles on our faces.

Next on the list for tomorrow was Black Combe, White Combe and Stoupdale Head.