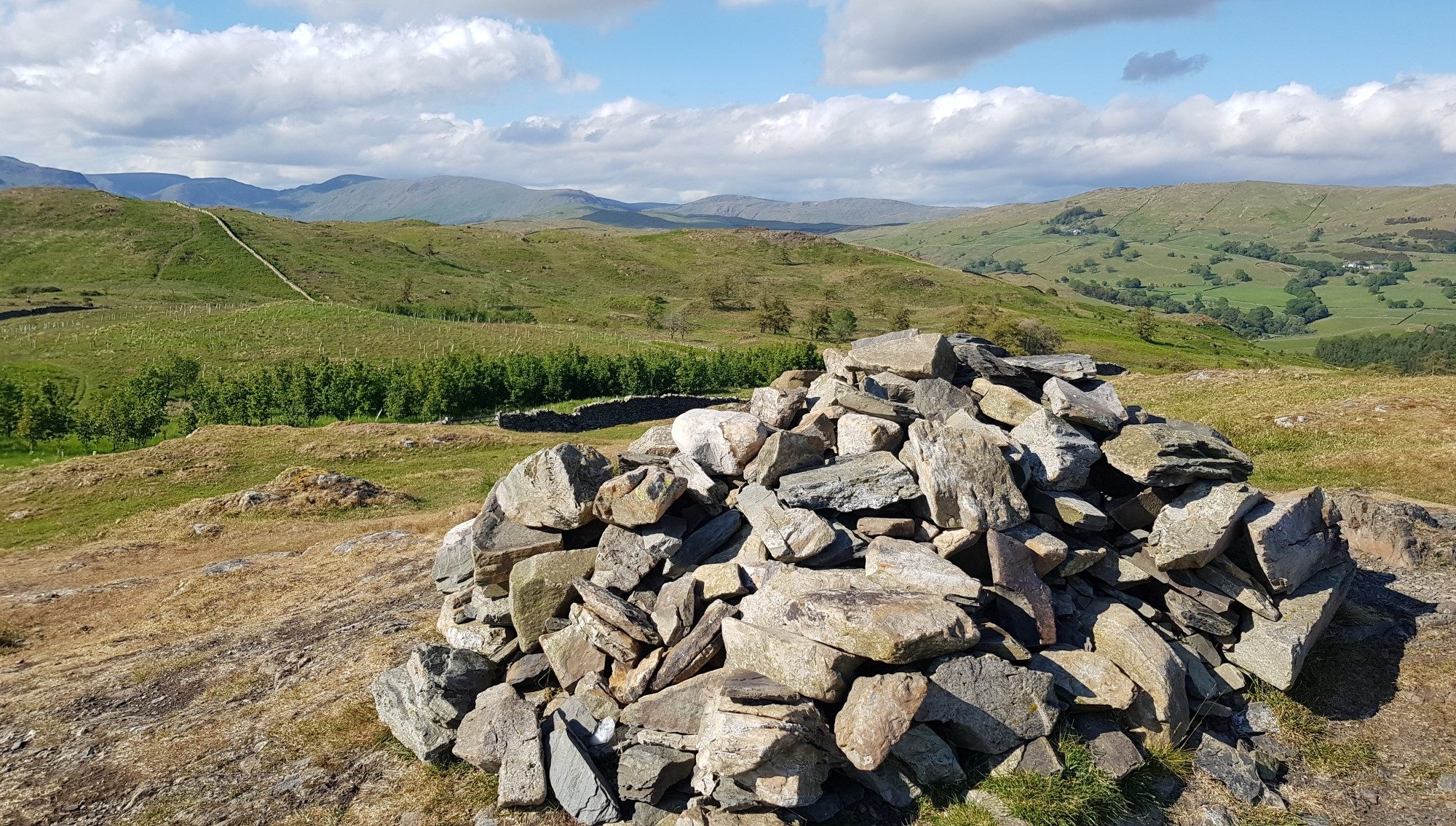 Adventurer Nic walked this route on Sunday 7th June 2020. These were Outlier numbers 20 and 21 of 116 for Nic. Here, she explains how you can bag these outlying fells too.

That morning my boyfriend James and I hiked Whitbarrow with friends, and after a coffee in Staveley we commenced our hike of Reston Scar and Hugill Fell from the centre of the village.

Firstly, we left the village and headed north up Silver Street. Shortly after that, two left turns onto School Lane and Brow Lane followed. Subsequently, we ascended away from the village on a track past farmers fields to the north.

As the trail wound uphill to the west, gorse bushes lined the way.

We went through a kissing gate to gain a ridge. Beautiful views over quintessential English countryside opened up around us. That is to say, we were mesmerised by the green rolling hills.

We hiked to the summit of Reston Scar over undulating ground.

The summit was marked by a large cairn. We looked out towards Hugill Fell from the summit of Reston Scar. When Alfred Wainwright wrote his book – The Outlying Fells of Lakeland – access was not permitted between the two hills. Thankfully, in 2020, hill walkers can make a fine circular of these two fells, therefore we took the opportunity to do just that.

We followed the trail north though fields.

We visited the highest point of Hugill Fell according to the map, but this is not Wainwright’s summit so we visited the top but then continued on in the direction of Black Crag. We passed through a gap in the wall and up onto the Wainwright summit, which was marked by a small cairn.

Ingleborough can be seen from the summit. In addition, we spotted many Lake District classic fells like Crinkle Crags, Scafell Pike, Bowfell, Great End, Great Gable and Harrison Stickle.

Moreover, the view down the Kentmere valley was really pretty.

We descended down following a path to the south east.

This path led to a tarmacked road. The Kentmere Road led us back into Staveley village.

We reflected that the ascent of Reston Scar and Hugill Fell topped off an epic day of peak bagging Wainwright’s Outlying Fells. Above all, we’d enjoyed time in the hills with friends which we’d missed so much during the COVID-19 lockdown. We would continue our quest with Caermote Hill a few days later.