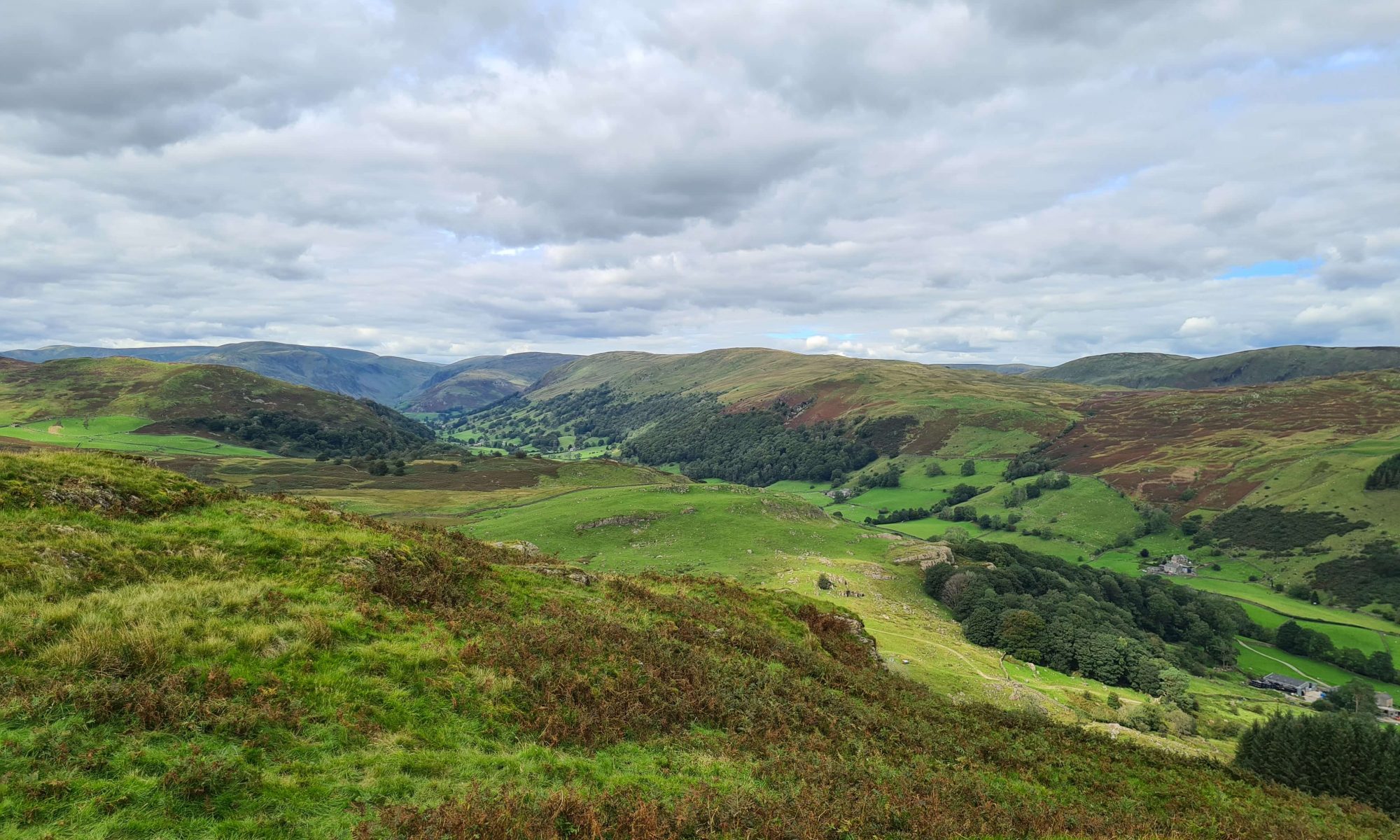 Adventurer Nic walked this route on Sunday 30th August 2020. These were Outlier numbers 83 to 86 of 116 for Nic. Here, she explains how you can bag these outlying fells too.

After a tough week tracking my boyfriend James on his world record attempt – a continuous self-supported hike of the Wainwright fells in 14 and a half days, I was ready for a good hill day.

I arranged to walk with my good friend Katie and we met in Staveley Mill Yard.

We joined Main Street and turned left to pick up the footpath that leads over the bridge across the River Kent.

Once across the river we turned right to walk along the river bank before taking the first left along a slim footpath.

Exiting the woodland trail through a gate we joined the tarmac road to walk uphill for just under a kilometre. Views over countryside were very pretty on our right.

At the finger post, we followed a tyre-track style trail to the east. The parallel tracks led down to a beautiful farmhouse where we were greeted by a pair of African geese.

Through the beautiful farmhouse garden, we crossed the stream and through the bottom gate, which led over slushy grassy ground. Keeping the wall on our right as it turned, we went through another gate and headed left.

As the wall turned sharply to the right, we left it and followed the faint path to continue uphill.

At the highest point of the pass we peeled off to the right to reach the summit of the first fell.

This nameless summit could be described as a south top of Brunt Knott, which is clearly visible in the distance thanks to the trig pillar on top.

As is tradition, I nickname nameless summits with the name of people I’m with at the time of ascent. So this is now officially ‘Marston Moor’ for my friend Katie. Not to be confused with the actual Marston Moor, site of a battle in the English Civil War in 1644!

We left the summit to the west and walked back to the wall before following it north.

At the wall corner, we went over a stone stile in the wall and followed the trail north to the summit. But not before we stopped to eat lunch and set the world to rights!

The summit of Brunt Knott is marked by an Ordnance Survey trig pillar. We enjoyed views across the Lake District, the closest hills were the outlying fells that make up the Bannisdale Horseshoe. In the distance we enjoyed views to the Scafell range and the Langdale Pikes. Closer to us were the fells of the Kentmere Horseshoe.

We chatted to a solo walker who’d hiked over from Kendal on the summit before leaving to the east following a faint path down to Black Beck. The path here became intermittent.

From here there are a few boundaries to pass over as carefully as possible. The first is a barbed wire fence, but there is a panel that has no barbed wire on it which is the best place to cross. The next has a handy stile.

After crossing the stile we followed the wall (keeping it on our left), passing beautiful purple heather on the hillside.

At the highest point of the pass we peeled off to the right to reach the summit of this nameless top of Potter Fell.

The summit of this nameless top of Potter Fell is marked by a couple of large stones. I nicknamed this one ‘Katie Knott’.

We left the summit to the east and made our way to the next boundary wall. We crossed at the lowest part of the wall successfully and walked over pathless grassy terrain to the next wall. Crossing this wall at it’s lowest point too, we continued east to the final wall crossing of the day.

From here we approached the summit of Ulgraves from the south-west.

The summit of Ulgraves was unmarked, the highest point of the fell was simply a raised outcrop.

It did have a lovely cairn to the north though which was worth a visit for the lovely views down into the Longsleddale valley.

We left the summit to the south east, over the easiest ground. However we were soon stopped in our tracks by a herd of 36 cows!

They were boisterous and kept gallopping from side to side very erratically. We paused and watched them quietly, in order to gauge our next steps. I’ve encountered cows countless times on my walks and I’m quite sensitive and receptive to them.

The steps I go through in my mind are –

a) Where is my escape route? In this case there was a low barbed wire fence to our left and the fell we’d just descended to our right.

b) Stand still – walking (or worse) running, could either spook the cows or encourage them to chase. More often than not, when you stand still, they will also stand and watch you calmly. Watch out for mums and calves specifically as they can be very protective of their young.

c) Consider the best way around them – on this occasion, we kept to the high ground before giving them a wide berth – taking a wide loop to the gate at the bottom of the field that we needed to pass through.

d) Check your friend is OK….. I noticed them first and said to Katie – “Erm….how are you with cows?” Her face was a picture!

We made our way to the gate to safety and followed the trail to the south.

Gurnal Dubs came into view and we made our way to the stile beside the track and followed the track anti-clockwise around the water.

As we reached the western end of the tarn a woman was exiting via the stone steps after a swim.

We got chatting and I encouraged Katie (a regular wild swimmer) to don her swimming costume for a dip.

Katie always tries her best to get me in the water but I’m a ‘dry land only’ kinda gal! After Katie dried off we continued following the trail to the west.

We passed across the dam at the bottom of Potter Tarn and continued west.

The trails led down to the farm that we walked by earlier in the day and we re-traced our steps back to the car from there.

What next? Great Worm Crag, The Pike and Hesk Fell beckoned. These would be my next Outlying Fells.