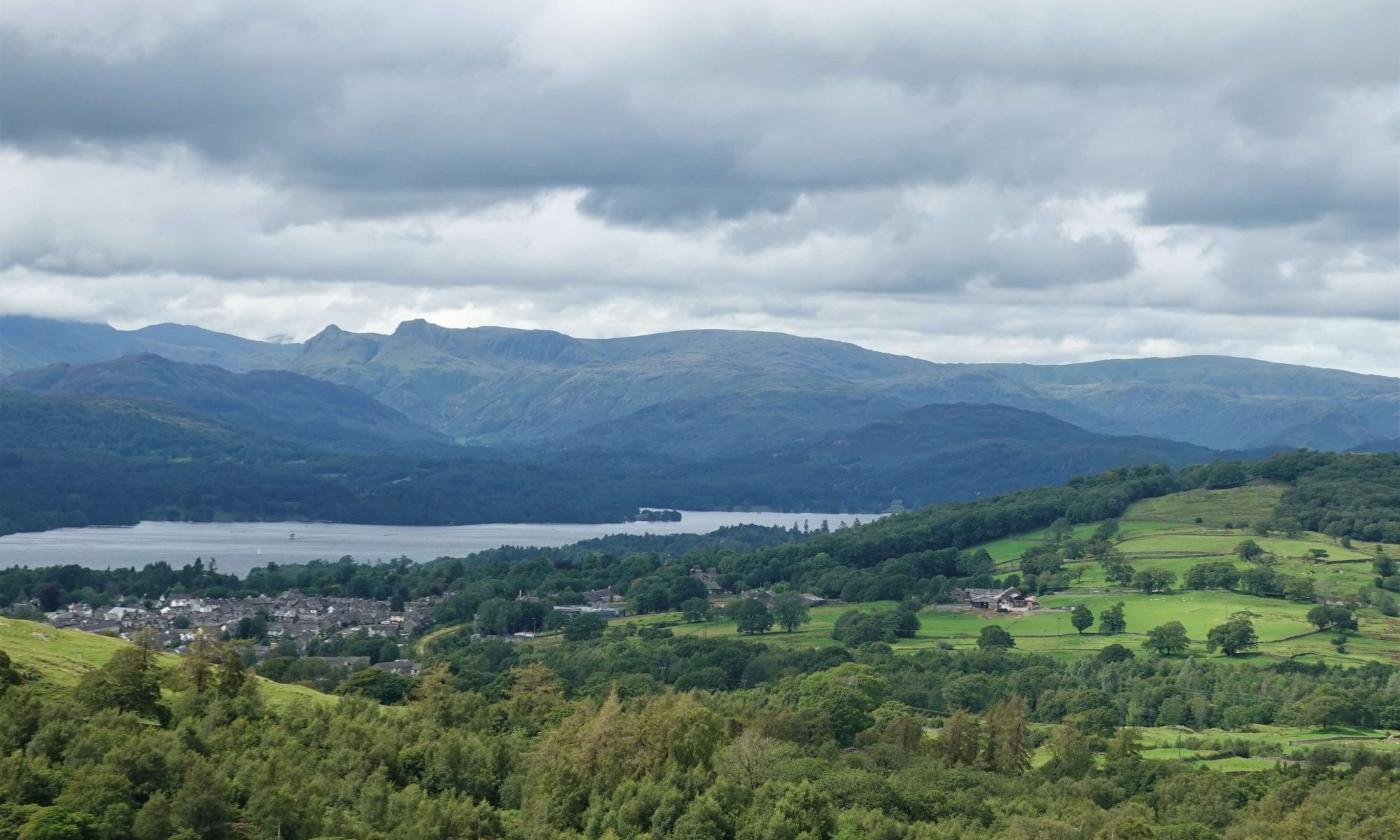 Adventurer Nic walked this route on Friday 7th August 2020. These were Outlier numbers 72 to 76 of 116 for Nic. Here, she explains how you can bag these outlying fells too.

A week earlier I hiked Latterbarrow and Claife Heights alone, but for this walk I was meeting my friend Andrew Dobb.

It was the day after my 36th birthday and I met Andy in the car park at Millerground, Windermere. We reached the summit of Orrest Head together, but sadly that’s as far as things went for Andy as he slipped off a stile and broke his leg in two places! Read more about the Mountain Rescue call out here.

With Andy’s permission, I re-started the route alone and here’s how it went.

I left the car, mentally put on my big girl pants and re-started the walk. It was only 4 hours since I’d first done this section so it felt a bit weird but I was happy to be making the most of the rest of the day as the weather was improving.

I crossed the road from the Millerground car park and followed the finger post leading into the park opposite. The tarmac path was lined with a metal fence on the right hand side. The trail bent to the right to run uphill alongside a dry stone wall.

Tarmac merged into gravel and the trail led between two sets of houses before ending at a road. I turned right and walked uphill, passing the church on my right. I ascended up the main road until I reached the pedestrian crossing on the main road. Crossing to the other side, I continued in the same direction, before turning left at the big sign indicating the start of the footpath to Orrest Head.

I took this path which soon split at a fork. Taking the left fork I continued down the walled path into the woodland. I turned right at a fingerpost marked ‘Orrest Head 1/2mile’ and ascended steeply up the path, which was walled on both sides.

At the next path junction I continued uphill in the same direction. I followed the track around as it switched back in a series of hairpins up the hillside. There are various options where you can cut the corners, reducing the mileage slightly but making the approach much steeper. Following the longer route meant I stumbled across the Gruffalo statue.

I continued along the main trail before peeling off right alongside a wall up a series of steps. The path then flattened out and lovely views opened up on the right hand side.

I then turned left through a kissing gate by a memorial stone.

I then proceeded straight up to the summit of Orrest Head.

The highest point of Orrest Head is a rock just behind the stone bench.

There are a variety of benches to sit and enjoy the view, just as Andy and I had done 4 hours previously, blissfully unaware of the accident that was about to happen.

After taking a look at the Wainwright Society plaque, I left the summit to the east, following the trail into the woodland.

Following the woodland trail, I reached the stile at the bottom (the one which Andy had broken his leg on earlier that same day).

I carefully clambered over and turned right through the kissing gate.

Following the path downhill, it was very slippery underfoot. I passed through a gate which led into a field where I followed the wall on my right.

I passed through two more gates, ultimately emerging at the road. Here I turned left and crossed the road, following the road uphill. I crossed Thwaites Lane and turned right at the finger post which led over a stile and through another gate. The faint track of a farmers vehicle led me through the field along the right of way.

I passed through two kissing gates before crossing the railway line.

Passing through another two gate, I walked past some garages and down Ghyll Road. When Ghyll Road met Droomer Lane I went straight ahead down a tarmac path before crossing the bridge over Mill Beck and turning right following a finger post for School Knott. I followed the gravel path south, crossing over Mill Beck Close and I continued to walk south.

After passing through a large gate, I took the left of two options, a smaller grassy path that led uphill. I passed a couple enjoying their lunch on a bench and headed through a kissing gate.

From here I followed the trail uphill and slightly to the right, all the way to the highest point of School Knott – my second outlying fell of the day. The views behind me to the Langdale Pikes were lovely.

It’s easy to see why School Knott is a favourite quick jaunt for locals, dog walkers and tourists alike.

It was warm and muggy and the clouds were struggling to lift somewhat, but it was still very beautiful, especially across the lake towards Claife Heights.

It didn’t take long to get to Grandsire from School Knott. I left the summit, continuing in the same direction heading for a large gate in the wall down to the south-east.

I passed through the gate and enjoyed the view across School Knott Tarn, before walking to the most northerly tip of the tarn and up to a gate in the wall ahead. Passing through the gate I continued up, following the grassy path to the summit of Grandsire.

There were lots of rocks to perch on so I enjoyed my lunch here.

I followed the wall from the summit down to the south.

This soon met the Dales Way, where I turned right for a very short distance before turning left to continue following the wall as it turned to the south-west and up to the next summit.

This summit was the least impressive of the four on the route as it was simply along the dry stone wall. This fell is also nameless, so in keeping with my previous habit of nicknaming the nameless fells, I named this one Dobb Dodd after my good friend Andy who should have been there with me if it wasn’t for his accident.

I left the summit of the nameless fell and followed an old wall down to the north to rejoin the Dales Way.

At the point where multiple paths converged, I passed through the gate to head west along the Dales Way. The route crossed Scout Beck twice and weaved through gorse bushes on gravel track before I forked left to head south along a grassy trail towards some large trees. I picked up a wide gravel track at the bottom which led past a small tarn on the right, passing through so many gates I lost count!

The track became tarmac before reaching a junction at the bottom. I followed the finger post for ‘Bowness via DalesWay 1 mile’ and headed right along the path running parallel to the main road. This soon rejoined the road but I forked right quickly afterwards, following another sign for the Dales Way.

Here there was a nice footpath on the right that avoided some of the road walking but it was intermittent.

Near the end of the road, I took a turning left through a gate and into a field. I followed the path along the wall through five kissing gates following the regular signs for The Dales Way.

At the fifth kissing gate I left the Dales Way and turned left to walk down Lickbarrow Road, walking in the same direction for 750 metres. Brant Fell came into view on the right over a gate.

I peeled off the road and followed a finger post on the right signed ‘Bowness 1 mile’ and went over a stone stile in the wall. A good track on the other side led north-west for around 80m until I peeled off to the left to head up Brant Fell following faint grassy paths. These paths led perfectly through the crags which from a distance seemed quite daunting.

The summit of Brant Fell is marked by a metal rod, protruding from the highest rock. The views across Windermere and down the length of the lake towards Gummers How are fantastic.

My favourite view however had to be over towards Langdale.

I left Brant Fell to the north, descending over grassy slopes. At the bottom I went over a wooden stile and immediately over a stone stile to the right. I continued my descent through fields before turning left to rejoin the Dales Way again for the final time!

At the crossroads in the path after a kissing gate, I turned right. I followed the sign for Helm Road 1/4 mile and walked along the wide woodland path.

When the road split again, I turned right before almost immediately turning left up some steps following the sign for ‘Biskey Howe viewpoint 50m’ .

At this point I passed a chap with a metal detector who asked me “Have you lost an old penny and a new one?” Utterly confused, I asked him what he meant and he showed me a battered old coin he’d just found, together with a shiny new one. Leaving him to his hobby I I passed the Biskey Howe Viewpoint and headed down the steps.

These led down to Biskey Howe Road where I turned left and walked towards town. I crossed straight over Lake Road, on a side street which led to a path at the end. This overlooked a playground on the left before I turned right to pass in front of Windermere RUFC. I walked along Longlands Road for just over half a kilometre before I turned left into the woodland. I followed the path alongside a fence on the right, before turning left to drop down onto Rayrigg Road at the bottom.

I crossed the main road and walked south for a short distance before turning right following a finger post for ‘Low Millerground via lakeshore 2/3mile’.

The trail led through a field and a gate before I turned right to walk along the lakeside.

The trail led past the jetties where multiple families and groups of friends were enjoying the sunny day and when the path ended, I turned right, to follow Wynlass Beck back to the car.

Well that was my most eventful Outlying Fells of Lakeland walk by far! I never expected to hike Orrest Head twice, neither did I anticipate having to call Mountain Rescue!

A big mash up of four of Alfred Wainwrights classic walks was up next – my route for Burney, Blawith Knott, Tottlebank Height, Wool Knott, Yew Bank and Beacon Fell was a corker!