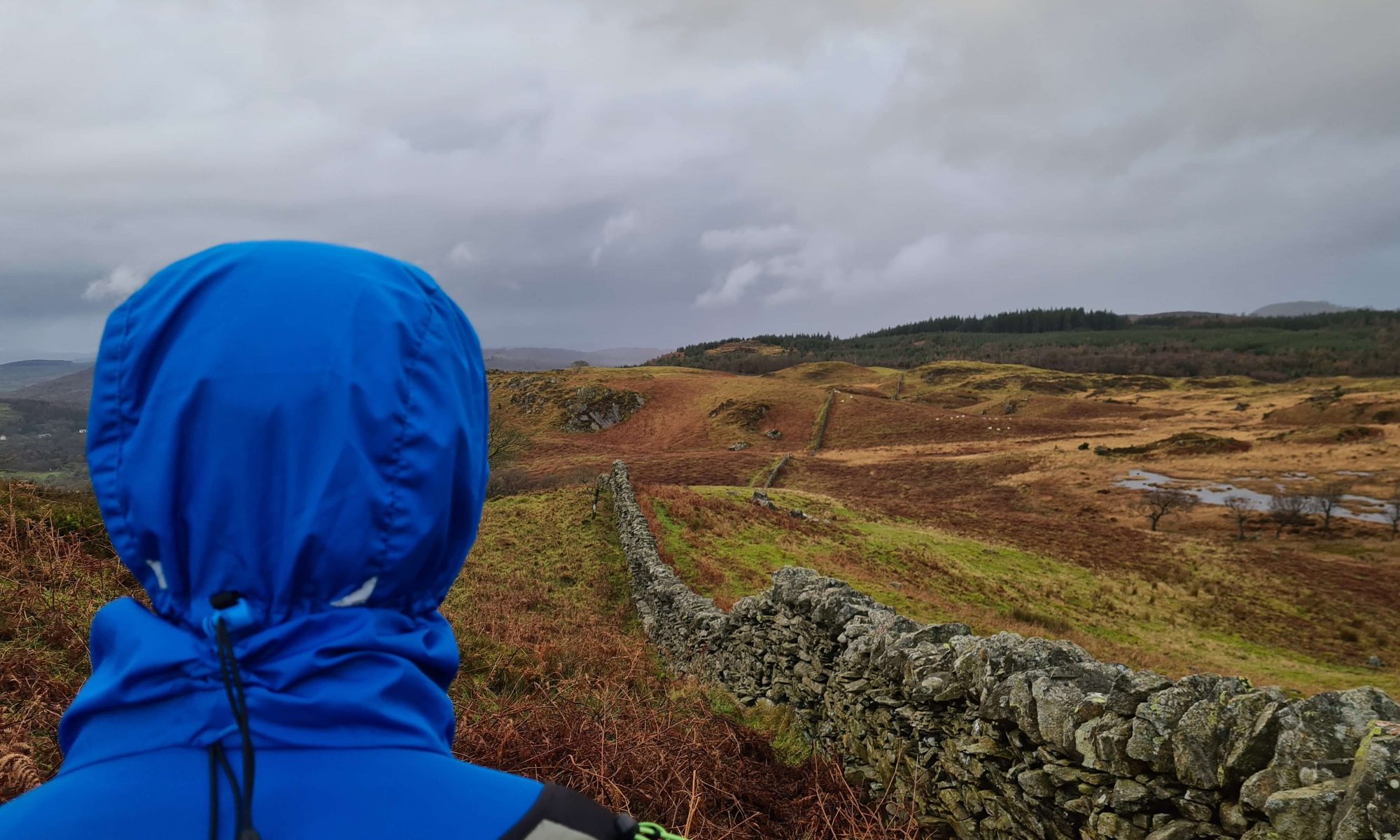 Adventurer Nic walked this route on Sunday 20th December 2020. This was Outlier number 99 of 116 for Nic. Here, she explains how you can bag this outlying fell too.

A fortnight earlier I’d hiked Hampsfell and Humphrey Head and now I was returning to South Lakeland to hike the nearby Newton Fell North top, followed by the Newton Fell South top (Dixon Heights) on the same day.

We parked in a layby opposite the ‘Chapel House- Forestry England’ sign and walked uphill following a track into the woodland.

After 400 metres we peeled off onto footpath that rose uphill which was grassy and a bit muddy underfoot.

We soon emerged out of the woodland and through gaps in the trees we appreciated the view over towards Finsthwaite Heights.

Soon after this Windermere came into view as we followed the finger post to the north.

The trail led into thicker woodland once more.

Once in the woodland we peeled off to the right in order to continue uphill.

We walked along a large score in ground through the tall trees.

The path was then easy to follow as it ascended and then flattened out and dipped slightly.

The path led us to a wide track where we could see the high ground of Newton Fell. We turned right on the track to head towards our target.

After 300 metres we took a sharp right following a yellow disc on a low fingerpost. The path looked overgrown at first but it was easy to follow the slim path. The scent of woodland filled our nostrils as we progressed along the trail. It was boggy and mulchy in parts but we made it through with dry feet, walking carefully over exposed wet tree roots.

We hopped over a stile and continued along the trail over the open fellside.

The handy footpath markers continued here. At a wobbly finger post we turned left to head east over rough ground towards the wall.

We then followed the wall as it undulated south. We crossed a stream and walked until a new boundary wall came into view.

Here we passed over a stone stile to the other side to continue following the wall on our left, all the way to the top of Newton Fell (North).

We didn’t climb over the wall to the true highest point of the fell as Alfred Wainwright himself wrote in his book The Outlying Fells of Lakeland – ‘the game is not worth the candle’.

Instead we stood beside the ugly phone mast and surveyed the views from there, including the High Newton reservoirs to the south east.

The view to Hampsfell and Morecambe Bay stretched out to the south.

We retraced our steps for almost a kilometre before we reached Whitestone Beck. Instead of crossing the stream by the wall like the ascent, we peeled off left at the path crossroads and crossed the stream further down.

Once on the other side we followed the path marked by a finger post to head west.

We admired the cliffs of White Stone to our left as we followed the trail down towards the road. When we reached the bottom we didn’t go through the gate. Instead we turned right to follow the grassy path. We exited through a gate in the corner of the field and turned right onto the lane. Another right turn at the crossroad at the bottom and we were back at our car.

Next on the Wainwright’s Outlying Fells peak bagging agenda was Newton Fell South Top Dixon Heights just down the road!