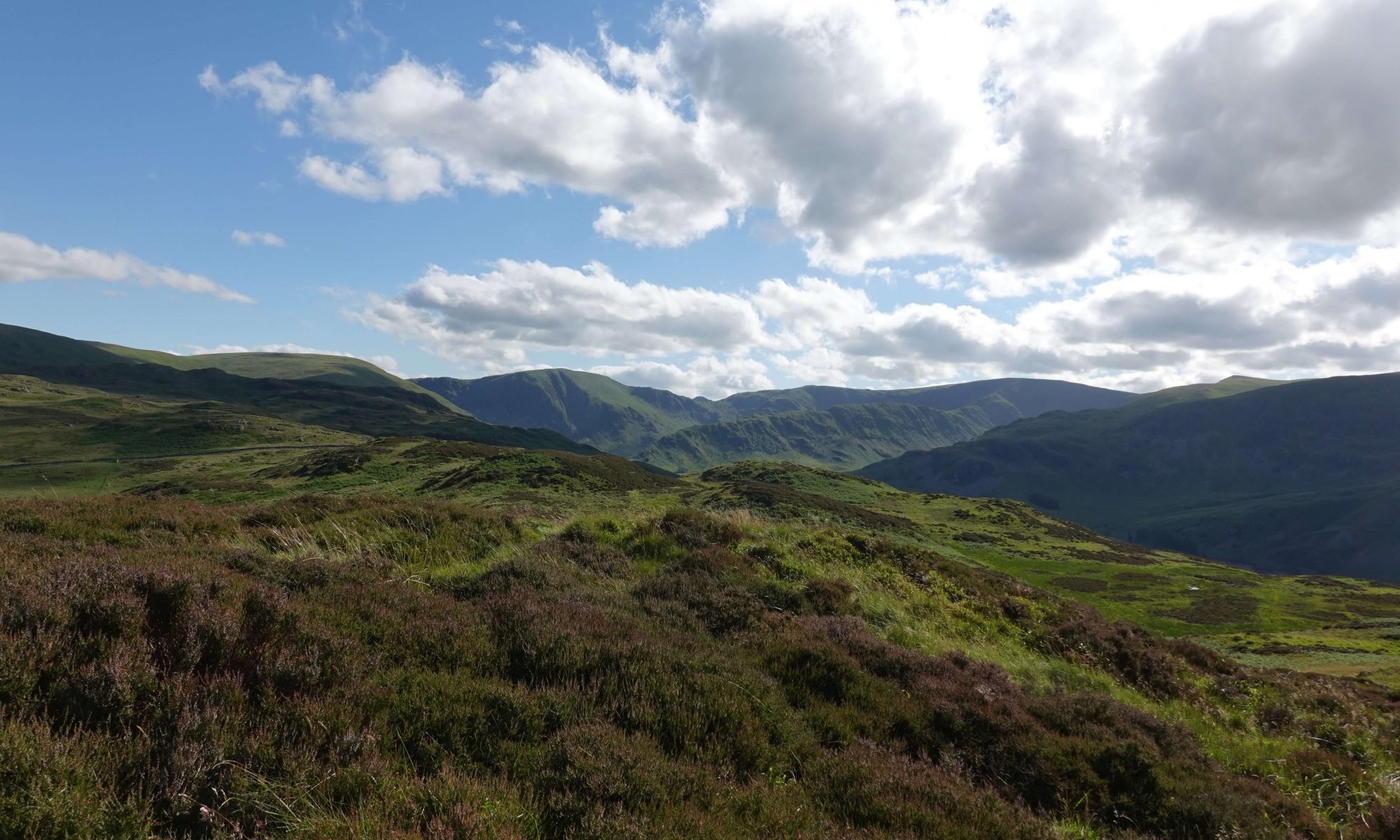 Adventurer Nic walked this route on Saturday 18th July 2020. These were Outlier numbers 63 to 69 of 116 for Nic. Here, she explains how you can bag these outlying fells too.

A week earlier we’d hiked a mash up of three horseshoes in the Shap Fells – the Crookdale horseshoe, the Wasdale horseshoe and the Wet Sleddale horseshoe. Next on the agenda -the Naddle Horseshoe – was not too far away from those, in the eastern Lake District. Parking is on the road junction at NY 528156 and there is room for a few cars.

The ascent starts from the car park, heading north along the road for a short distance before peeling off left along a wide track.

We passed a woman with a horse and a dog along this trail. The path narrowed and became grassier as it led south-west towards the first fell of the day, Scalebarrow Knott.

The summit of Scalebarrow Knott was marked with a cairn and the views were of rolling countryside, dissected by dry stone walls.

I really do love the quietness of these fells. They seem to be seldom walked. This was a sunny Saturday and we didn’t see another person for the rest of the day.

From Scalebarrow Knott, we continued over grassy terrain in a south-westerly direction towards our next summit – Harper Hills.

The summit of Harper Hills was clearly marked by a cairn. The views to the higher Lake District mountains became increasingly good as we approached the furthest end of the horseshoe.

From Harper Hills we continued south-west towards the next outlying fell – Hare Shaw, following a path for most of the way.

As we got deeper into the walk the paths thinned out and we walked through long tussocky grass. At one point we passed a plot where lots of trees had been newly planted.

We reached the summit of Hare Shaw, and from here we enjoyed a great view to Selside Pike, Branstree and Harter Fell.

A small cairn marked the summit.

As we left the summit of Hare Shaw, we were given a opportunity to appreciate the remainder of the horseshoe.

From Hare Shaw, we dropped down over lumpy bumpy grassy terrain to the north-west before Haweswater came into view.

We appreciated Kidsty Pike from this vantage point – the sharpest peak on the line of fells which also includes the bulk of High Street.

After navigating through a lot of thick bracken, we approached a wall junction.

We passed through a large gate and proceeded on towards the fourth of the outlying fells of the Naddle Horseshoe.

By this point I’d chewed James’s ear off incessantly about my recent trip to visit family in Lincolnshire.

He finally had a chance to contribute something to the conversation, whoops!

A small cairn marked the summit and the light was stunning by this point in the evening.

We normally nickname the nameless summits (generally based on the names of friends who have joined us on the summits) but there were just the two of us on this trip so I’ll nickname them after previous pets of mine. So the first nameless summit is hereby ‘Crixus Crag’ after my pet goldfish.

We tried to stay high on the ridge making our way through increasing amounts of heather and bracken.

We passed through another large gate and then progressed towards the second of the nameless fells.

The summit was marked by a small cairn. By this point, perfect fluffy clouds had formed on the bright blue sky and we were really enjoying the walk.

Following the earlier theme, the nickname of this fell is ‘Naevia Nab’ (after another goldfish of mine).

From there we looped around to Hugh’s Laithes Pike.

This summit was marked with a more established cairn.

The views across Haweswater from here were wonderful.

We then left, in long grass and bracken, in the direction of the final Wainwright Outlying Fell of the day.

The final summit of the Naddle Horseshoe was also nameless. So, following the earlier theme once more, the nickname of this fell is ‘Gannicus Gable’ (after my third and final pet goldfish).

It felt great to have got seven more Outlying Fells of Lakeland under our belts on such a fab horseshoe.

From the final summit we headed south over steeper terrain, avoiding the thicker vegetation and trees to the bottom track.

Once at the track, we followed it north-east, passing through a large gate before turning right at the finger post to pass through another gate and across Naddle Beck at the ford.

We then headed east, up a gravel stony path and through another couple of gates to rejoin the trail that we’d walked on close to the start of the walk. We took a bypass path around the right hand side of Scalebarrow Knott and back to the car.

What next? Latterbarrow and Claife Heights beckoned. These would be my next Outlying Fells, I would be continuing on alone without James.