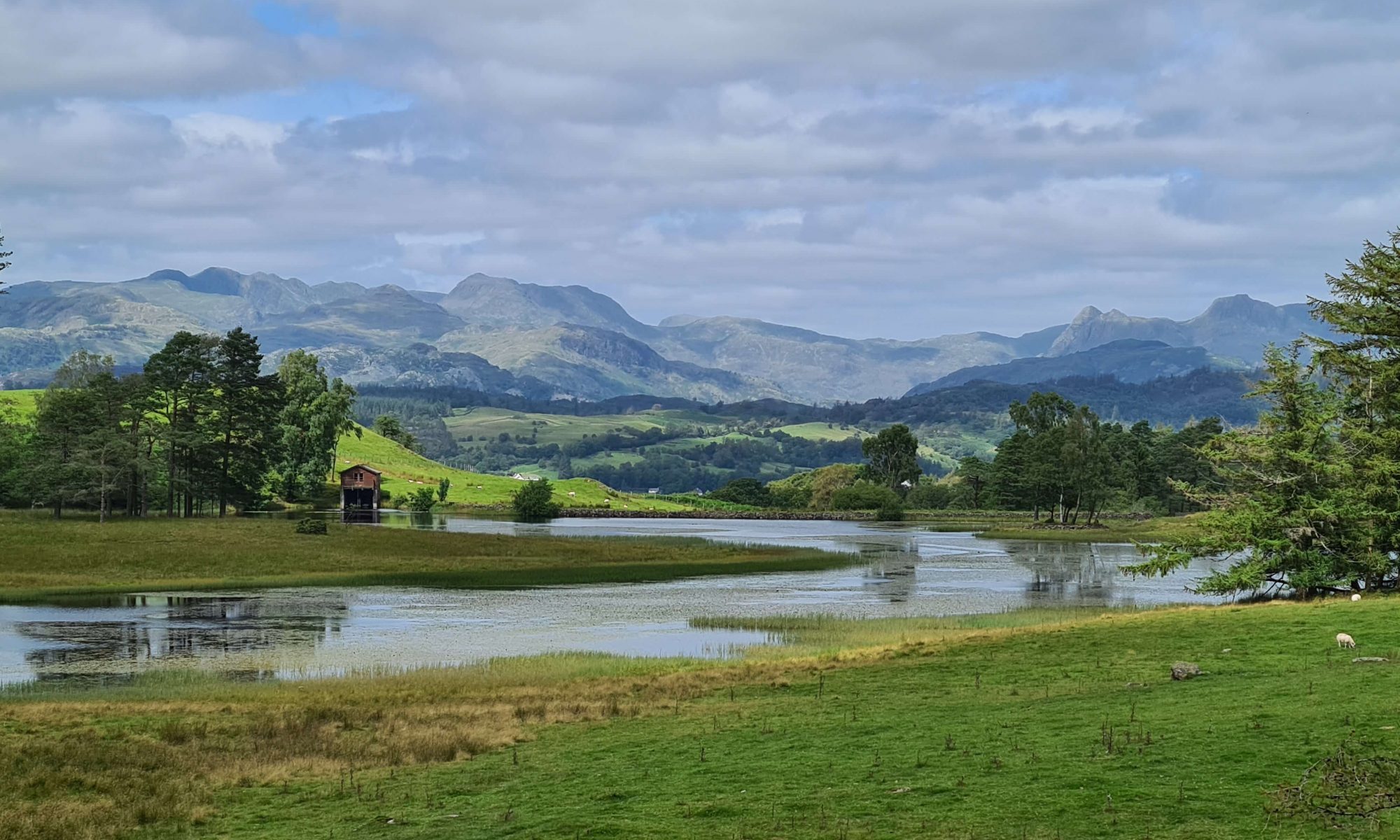 Adventurer Nic walked this route on Wednesday 29th July 2020. These were Outlier numbers 70 and 71 of 116 for Nic. Here, she explains how you can bag these outlying fells too.

I’d walked all of my previous Outlying Fells of Lakeland with either my boyfriend James or with friends so it was refreshing to hike these two outliers alone. The previous week I’d hiked the Naddle Horseshoe in the far east of the Lake District National Park.

I parked in the car park at Braithwaite Hall and paid by donation in the box by the entrance. Heading left out of the car park I walked past the Cuckoo Brow Inn and then turned right to walk steeply uphill on a tarmac road.

It would be five and half kilometres of walking before I reached the summit of my first Outlying Fell – Latterbarrow.

The view over the dry stone wall was beautiful, overlooking rolling fields of green. I walked over the cattle grid and then followed a finger post onto a track, which led to a foot bridge over the Wilfin Beck.

Crossing the bridge, I picked up the rocky footpath on the other side which led to a gate. I then went through another gate before turning right onto a wider track which continued north with walls on either side.

After passing through another gate, I hopped over the Wilfin Beck yet again, this time on stepping stones.

The path then led up until Moss Eccles Tarn came into view on my left.

I carried on, following the finger posts, as the path wound through fields of calm cattle, until I reached another gate.

Beyond this gate was a wow moment. A simply stunning view of the higher Lakeland fells opened up in front of me over the top of Wise Een Tarn.

The Langdale Pikes looked sharp and jagged on the right of the skyline and the Scafell range loomed in the centre with Wetherlam off to the left. I was in awe!

After passing the Scale Tarn on my right, the path became grassier underfoot. I followed the path which soon ran alongside a wall on my left and then continued up and into the woodland through a gate.

I really enjoyed the woodland trails of this walk, they were so full of bird chatter, it was much cooler thanks to the shade of the tall tress and I found the earthy woodland scent to be so calming.

350m after passing through the gate into the woods I followed a finger post which branched off the main path to the left. This led to a crossroads at the bottom, where I turned left to follow a wider track.

At the next major crossroad I turned left again, and followed the path for another 200m before turning right, avoiding passing through the gap in the wall ahead and instead following the path north.

This part of the route was narrow and muddy at times.

I followed the trail downhill before it rose up again up some steps.

It weaved, twisted and turned for a while before I turned left at the next t-junction, surrounded by Christmas trees. I followed the trail over a large gap in a wall before it led to a stile. Over the stile, I turned right to start the final ascent of Latterbarrow.

The obelisk is many metres tall and stands proud atop the 244m fell.

The walk from Colthouse is a popular one and I saw multiple families all arrive at the summit and sit down in their small groups to enjoy lunch on the summit of Latterbarrow. It was a glorious day to enjoy the views across the Lake District. As good as the views were towards the nearer fells like Wansfell Pike to the north east, I couldn’t take my eyes of the Langdale Pikes to the north west over the top of Black Fell.

I left the summit of Latterbarrow with a full stomach and retraced my steps.

I enjoyed a lovely view of Hawkshead as I returned to the stile at the bottom of the hill and continued back along the same path I’d taken earlier. When I came to the second of the two main crossroads I’d encountered earlier, this time I continued straight on.

As the main track bent around to the right, I took the footpath which led straight on following a finger post.

230m later the path forked again, and I turned right to head uphill on a forest path.

As I glanced to the right through the trees I caught a glimpse of Lake Windermere and the Fairfield fells beyond.

This section of the route was by far the quietest of the day. I didn’t see many people at all between here and the Claife Heights (High Blind How) trig pillar.

The path led me through the woodland, over a foot bridge, before leading me down onto another wide track.

I turned right onto this track for only a short distance before following another finger post marked ‘Far Sawrey 2 Miles’.

This section of the walk was really pretty, with established woodland and beautiful fox gloves popping up all over.

I forked right before the path started to dip downhill to continue uphill towards the summit.

At the next fork in the path, I turned left which led through bracken to the Claife Heights trig pillar (High Blind How).

Alfred Wainwright wrote in his book – the Outlying Fells of Lakeland – that this trig pillar was now lost in conifers and inaccessible, but it is possible now, you just have to follow the trail, weaving through a sea of shoulder-height bracken to get there!

I paused for quite some time on the summit rocks. It was so peaceful. There was nobody else around and it was so quiet. I just sat alone and listened to the breeze pass through the trees for what felt like ages.

When it came time to leave, I continued along the bracken-filled path to rejoin the woodland path which was covered in pine needles and soft underfoot.

I reached the valley bottom and crossed a foot bridge over a stream which fed Three Dubs Tarn over to the west.

I picked up the path on the other side of the foot bridge and walked up past a finger post signed to ‘Sawrey Ferry’.

The trail led up and over lumpy terrain to reach a view point of Windermere lake and weaved around some large crags.

I continued along the trail, following the finger posts which were now very regular. At one point I stopped to give directions to Three Dubs Tarn to a Scottish couple who were away on holiday.

At a t-junction in the path I turned right, again signposted for ‘Far Sawrey’. Along this path I went through a gate and continued south, keeping the wall on my left.

At this point the track twisted and undulated beside some impressive dry stone walls and later, there were walls running either side of the trail.

At the next path junction I turned right to join the bridleway.

Keeping the wall on my right, I followed the bridleway down to meet the track at the bottom. Passing through the gate a beautiful view opened up on my right.

The path brought me out right opposite my car.

Next on the list was Orrest Head, School Knott and Brant Fell, a walk where the phrase ‘break a leg‘ was taken quite literally!