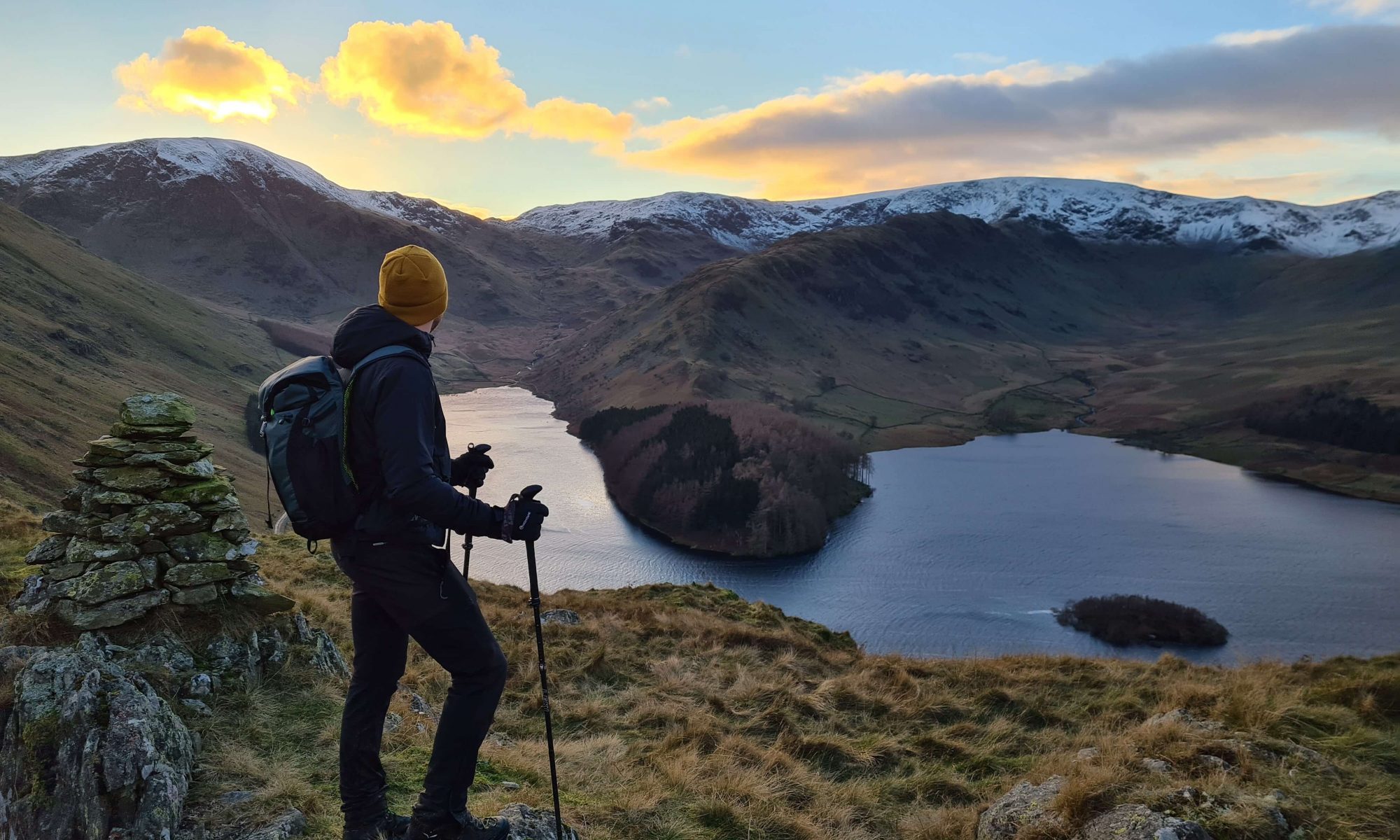 Howes and Seat Robert are two classic routes featured in Alfred Wainwright’s Outlying Fells of Lakeland guide book. The original routes take in seven outlier fells of the Lake District National Park – two on the Howes route and five on the Seat Robert route. This route card incorporates all seven hills into a single circular and is a fantastic option for someone peak bagging the Outlying Fells of Lakeland.

Adventurer Nic walked this route on Thursday 24th December 2020. These were Outlier numbers 101 to 107 of 116 for Nic. Here, she explains how you can bag these outlying fells too.

Four days earlier we’d hiked Newton Fell (south) and Newton Fell (north). Today was a crisp and snowy Christmas Eve so we set out on a long hike of seven outlying fells near to Haweswater.

We left the car park and headed to a large gate by Haweswater information board. We passed through the gate, designed to keep deer away from the road and followed the track uphill.

Soon we reached a fingerpost and turned left following the sign to Gatescarth Pass.

This stony path weaved up the hillside. We passed through a kissing gate and continued uphill.

Stunning views surrounded us, to the right towards Blea Water and to the left towards Haweswater. The sky was a beautiful hue of early morning sunrise pastel colours.

It became very icy underfoot as we reached the top of the pass.

There was an option to peel off to the left to hike Branstree but we kept going straight on following the fingerpost sign for the byway towards Sadgill.

We passed through another gate and started heading downhill with views of the Longsleddale valley which was glowing in the sunlight.

We passed through a gate at the bottom of the pass and then turned left at the fingerpost marked Swindale Head and Wet Sleddale. Hopping over the stream we made our way on the grassy trail which was boggy in parts in the direction of Mosedale Cottage to the north east.

We passed through a gate and at this point we could turn left for Branstree or right for Tarn Crag, two Wainwrights. Instead we continued heading north east for Mosedale Cottage.

We reached the white-washed bothy but didn’t enter due to the current COVID restrictions. It was also a little early to stop for lunch, but is a great shelter under normal circumstances.

We continued past the bothy, crossing Great Grain Gill and continued along the path. Soon we crossed Nowtly Gill and turned left after this, following the tracks of a farm vehicle up the hillside.

At around the 500m mark we looked over our left shoulders to see the white Mosedale Cottage from above.

At the top we turned right and made for the highest point, on a rocky outcrop.

Soon, in a vicious cold wind we reached the summit of Howes.

We took a few photos on the summit but we didn’t stay for long. It was bitterly cold in the exposed position and we needed to retreat to lower ground as soon as possible.

We glanced across to Ulthwaite Rigg, a fell we’d hiked as part of another long Outlying Fells of Lakeland walk a few months earlier.

We left the summit to the north east and weaved down through the crags of Howes onto another farm vehicle track that would guide us towards Nab Moor, our second of Wainwright’s Outlying Fells of the day.

The track led us to a fence which we passed over before we continued north to the summit of Nabs Moor.

Nabs Moor summit was marked by a small rock on a boulder.

The sun was now shining on us which took the edge off the wintery gales. We admired the views into Swindale valley before starting our descent into the Mosedale valley.

We headed south east initially before turning east to walk beside Swine Gill towards Mosedale Beck in the valley bottom.

We crossed the fence for the second time of the day and used a small island in the river to aid our crossing. Dry boots all round!

We ascended High Wether Howe on the right hand side of the fence. As we reached the top we turned left and crossed the fence for the third and final time. Just short of the summit we stopped for lunch, as the rocky top of High Wether Howe gave us some much needed protection from the wind. Lunch today was a family favourite recipe from the night before – potato, cheese and onion, baked in the oven. It was cold now but was still delicious!

We topped out onto the summit of High Wether Howe and took some photographs before continuing north to Fewling Stones.

We passed a lip of ground where a perfect collection of icicles had formed. They glistened in the sunshine.

We continued north under bright blue skies until we reached the top of Fewling Stones.

The summit views of Fewling Stones were less dramatic than the earlier summits of the day as we were walking further and further away from the bigger fells, but the hillside was glowing in the sunshine and it had turned into a lovely day for hiking.

We left the summit of Fewling Stones to the south east. We walked over pathless terrain passing to the north of Haskew Tarn before ascending Seat Robert, our fifth summit of the day.

Seat Robert had the most established summit of the bunch, with a large wind shelter and summit cairn. We both commented that there wasn’t much of a drop in height between the five outlying fells on this side of the valley which meant that that hardest part of the walk was the pathless tufty terrain. You just have to be careful not to twist an ankle on the rough ground between the fells around Seat Robert.

We left Seat Robert to the north, staying left of Gambling Crag and following a series of intermittent farm vehicle tracks to Great Ladstones. There were patches of thick ice galore on this part of the route.

The summit of Great Ladstones was marked by a cairn. We left the summit to the north east and made a beeline over pathless terrain to Langhowe Pike.

By this point we were beginning to tire but we knew we had a couple of ascents left.

Langhowe Pike summit was marked by a cairn. We admired the views back to where we’d walked from. It had been a great day of hill walking so far.

The Descent to Swindale Head

We left the summit, making our own zig zags down the hillside towards the bottom path. We made it to a gate at the bottom beside a dry stone wall.

From here we followed the path south-west to a bridge in the Swindale valley, just upstream from the dam.

After crossing the bridge we joined Swindale Lane to continue south west to Swindale Head.

At the farm at the end of Swindale Head we went through a gate to the right of the buildings and turned right at the finger post marked ‘Public Bridleway – Mardale via Old Corpse Road’.

The Old Corpse Road and the Final Descent to Mardale Head

We followed the bridleway up between two walls to a gate.

Passing through the gate, we then crossed a stream heading uphill to the north.

We continued along the Old Corpse Road as it swung west.

We soon realised we were walking just below the summit of Hare Shaw, a fell that we’d hiked as part the Naddle Horseshoe a few months earlier.

At the top of the pass we could appreciate the snow-capped High Street mountain range before the southern tip of Haweswater came into view.

Many would argue that this is the best view in the far eastern Lake District National Park. Rough Crag drops dramatically down into reservoir forming a dramatic peninsula.

We stopped for photographs close to two ruined buildings just off the path.

We followed the zig zag trail down to the road where we crossed over and took the lakeside path back to the car.

The lakeside path was also beautiful, with the water reflecting a gorgeous sunset glow.

Due to erosion, the path at the end is not recommended, so we finished the last part of the route on the road back to Mardale Head car park.

At the very end of the walk we had a ‘heart in mouth’ moment! The car key wouldn’t work. It was so cold that I think it had affected the battery. Luckily there’s a back up key hidden inside the push button casing so I used this to gain access. Unfortunately it meant setting off the car alarm in the process! The sound of our alarm must have carried down the valley until I managed to disable it! Oops!

Gummer’s How and four other fells at the south of Windermere beckoned. This would be our next Outlying Fell bagging outing.