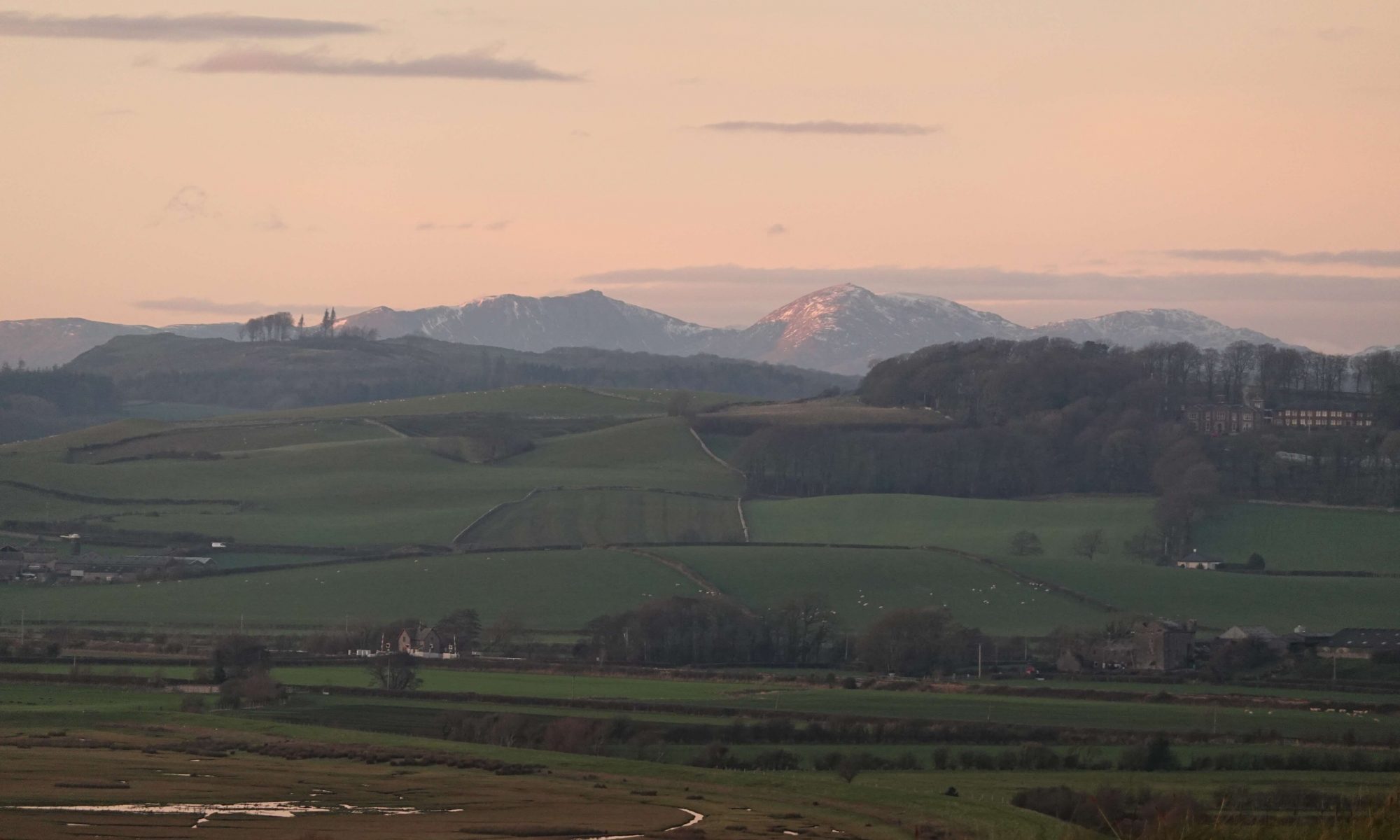 Adventurer Nic walked this route on Monday 7th December 2020. These were Outlier numbers 97 and 98 of 116 for Nic. Here, she explains how you can bag these outlying fells too.

The previous day I’d hiked Dunmallard Hill and Heughscar Hill and I decided to seize upon the stable, crisp winter weather window and head down south to Grange-over-Sands to continue my peak bagging quest to hike all of the Outlying Fells of Lakeland.

From Holy Well Lane car park, I walked north over the cattle grid and headed down Holy Well Lane. After 700 metres I turned right onto the bridleway to head east.

At the end of bridleway, I passed through a gate and turned left to walk alongside the wall. The trail was grassy and muddy in places.

I passed over a stone stile on my left and proceeded immediately through a small gate.

This led across a field of sheep before leading to a passage under the railway line.

After exiting the tunnel I continued straight on, hugging the right hand side of the field. I crossed a tarmac track and continued walking north through a gap in the wall, following a fingerpost for the Cumbria Coastal Way.

I walked through another field to a gate in the top right hand corner. This led into another field and to another gate, which led onto a short boardwalk and over a stile. This field had farm buildings over to the right which I walked alongside, heading to a ladder stile.

I passed over this into the next field and went through a gate which led on to exit the field through a gate leading onto a lane. Here, I turned left and walked north along the lane before turning left again at the T-junction for Jack Hill. I then took the first right, around the front of the Pheasant Inn pub to walk uphill on Church Road through Allithwaite.

When the road forked I took the left hand fork which led onto a residential side street.

At the next junction I followed the sign for Cartmel and continued uphill passing Saint Mary’s Church and Allithwaite Primary School on my left.

I took the next right as the gradient began to flatten out onto Wart Barrow Lane. It was along this road that I saw a bench and sat and ate my lunch there.

Setting back off I soon saw the stile in the wall on the right.

I used this and walked along the field which cut the corner of the country road.

From here I was treated to lovely views over to the distant snow-capped Coniston fells.

It was only two days earlier that I was right opposite the Old Man of Coniston on Top O Selside.

I merged back onto the road over another stone stile next to a large metal gate and continued to the next T junction. Here I turned left followed by an immediate right, beside the cemetery to walk up Grange Fell Road.

I passed the golf club and continued uphill.

I took my next left onto Spring Bank Road to head north, but soon followed a finger post for Cartmel over a stone stile.

This led onto the open fellside. I headed north and decided to veer north west to the summit of Fell End.

Behind me was a beautiful view across Morecambe Bay which was glistening in the sunlight.

I left the summit to the north following a grassy trail that led to a large gate. I used the stile to the left of the gate and then ascended once again to the north.

The boxy Hampsfell Hospice soon came into view in the distance and the trail ahead led to it, passing over one more stone stile along the way.

At the summit I explored the Hampsfell Hospice site which was built in 1846.

You can peer inside and read poetry mounted on plaques.

You can also ascend the stone steps on the outside of Hampsfell Hospice to walk on the roof.

There you will find a list of fells and towns visible from Hampsfell plus the corresponding bearing for each. The list includes some familiar Outlying Fells of Lakeland like Black Combe, Caw and Walna Scar.

On a good day you can see as far as Blackpool, the Howgill fells and Ingleborough.

The viewfinder is looking a little worse for wear these days but it is very charming.

On the top there was also a stone which read ‘One day you will look back and realise the little things are the BIG things’ which for me sums up the joy of the smaller Outlying Fells of Lakeland.

As I left Hampsfell Hospice I followed one of the many trails which headed south east through the patchy sections of limestone pavement.

There was one slightly awkward section of limestone pavement at the bottom which would be slippery in the wet, but I got down with no worries and immediately went over the ladder stile.

The trail led downhill to a stone stile. I went over this and continued walking beside a fence along a grassy path.

I went through a gate at the bottom and turned left to head down the lane.

Following a public footpath sign on the left, I entered woodland through a metal gate. There are a few options for exiting the woodland, but my GPX trace will show that I exited using the right of way behind a large building and down multiple flights of steps through Lieutenant Colonel Austin Townsend Porritt’s Garden before reaching Main Street.

Here I turned right and crossed the road to head down into a large car park to gain access to the Promenade.

Behind the Commodore Inn there is a tunnel under the railway line which I passed through. At the other side I turned right onto the promenade.

I walked right to the end of the promenade and turned right under the railway. I walked along Carter Fold which led to Cart Lane. There I kept walking south past houses that must have wonderful views across the bay until the lane became a thin path.

This path led to a staircase. I turned left at the top of the staircase to walk along Kentsford Road. I soon reached Kents Bank railway station.

Here I showed caution crossing the railway and exited through the gate on the other side.

I passed through a gap in the wall to walk along the thin promenade in the direction of Humphrey Head which was now looming in front of me in the fading light.

It was here that I wondered if I’d make it before the sunset, so I increased my pace. The thin promenade didn’t last forever and soon I was following a mushy trail but I could now see the path that I started on, on the other side of the bay. I re-joined the path and turned right back onto the bridleway.

At the end of the bridleway I turned left, but instead of following the lane back to the car I took the next left through a gate.

I peeled off the lane and followed the spine of Humphrey Head along the grassy trail, passing through one more gate along the way.

The true summit of this tiny fell is actually 150m before trig pillar so I took a few photos here before walking on to the trig.

I continued to walk part way down the nose of the limestone peninsula towards the vast expanse of Morecambe Bay.

For a moment I considered returning to the car off Humphrey Head point via the saltmarsh but I didn’t fancy crossing the soft sediment alone after sunset as the channels are often deep and impassable.

I therefore retraced my steps and paused at the gate by the trig pillar for a while, enjoying the sunset.

Today – 7th December 2020 – marked 10 years since one of the worst days of my life, a bereavement that will never leave me.

I couldn’t think of a better way to mark the day than with a glorious pink sunset in a stunning Cumbrian location.

I considered a route off the side of the crag directly down to the car but I was told this is a very steep and slippery descent on limestone and mud so it’s not one I’d recommend alone in the dark either. I therefore retraced my steps back to Holy Well Lane and to my car.

Up next would be Newton Fell (North Top).