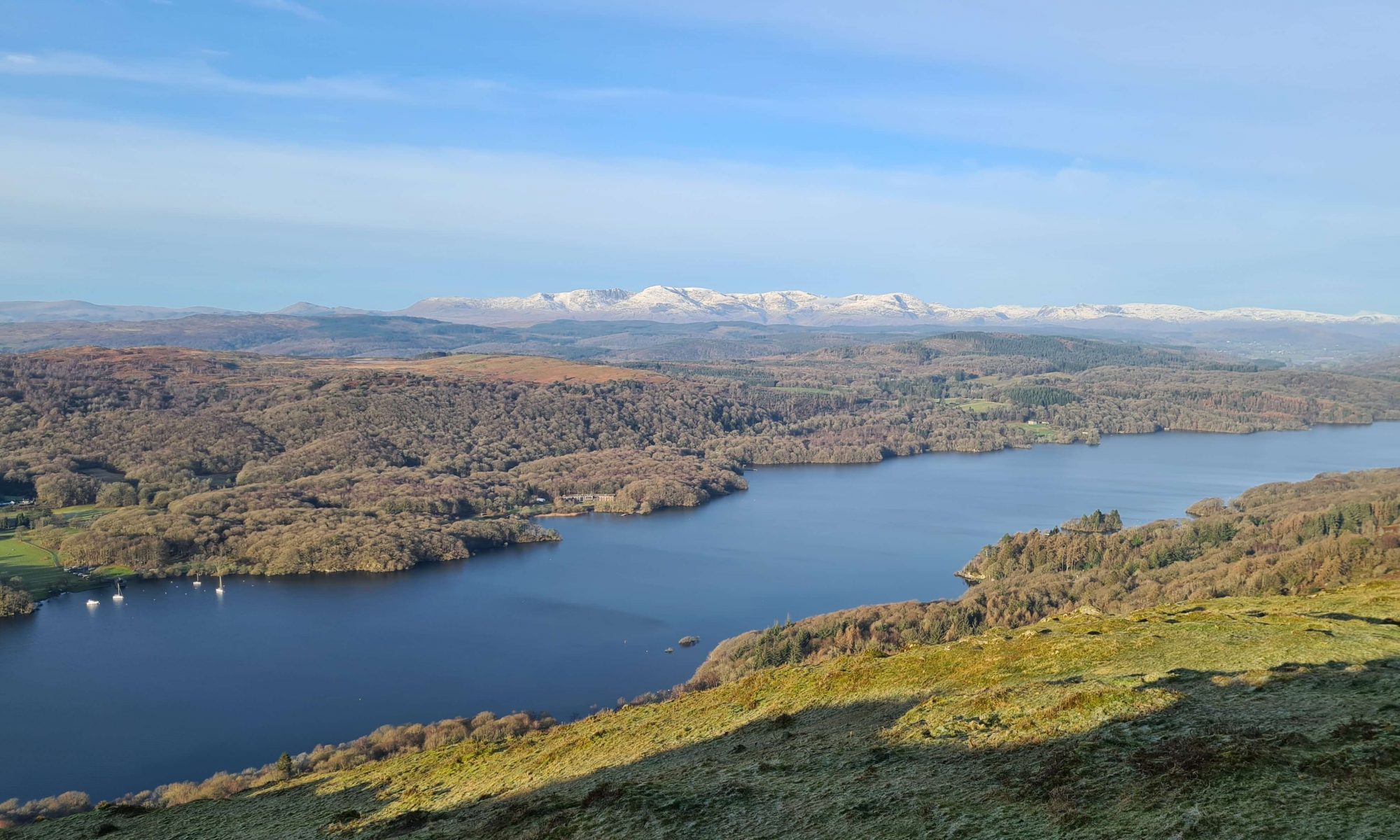 Gummer’s How, Finsthwaite Heights, Bigland Barrow, Staveley Fell and Cartmel Fell are five walks featured in Alfred Wainwright’s Outlying Fells of Lakeland book. The original routes hike the five fells individually, but this single round visits all five summits in the Lake District National Park. This route card is a fantastic option for someone peak bagging the Outlying Fells of Lakeland.

Adventurer Nic walked this route on Monday 28th December 2020. These were Outlier numbers 108 to 112 of 116 for Nic. Here, she explains how you can bag these outlying fells too.

A few days earlier we’d hiked a circuit including Howes and Seat Robert in the far eastern Lake District. I chose Gummer’s How and the four fells close to the southern tip to Windermere for my penultimate Outlying Fells of Lakeland hike, and I was joined by my boyfriend James and friend Katie.

The start point for this walk was the same as the start point for Newton Fell (North) – a layby opposite the ‘Chapel House – Forestry England’ sign. We followed the wide track up into the woods. After 400m we took a footpath that was grassy, muddy and steep. This opened up at the top and we got a sneak peak of Finsthwaite Heights. It was early and the views were all tinged with blue.

We followed the finger post to the north, appreciating the slight pink glow over Windermere. The path forked down to the left to join the wider track and we walked along this as it weaved to the north east. We were deep in conversation, catching up on each other’s Christmas breaks.

Ignoring the right hand turn off for the Simpson Ground Reservoir, we kept to the main track until we were almost parallel with the summit of Staveley Fell.

From here, we weaved our way up the open fellside, being careful not to twist our ankles over the uneven ground.

As we reached the summit of Staveley Fell, the skies beyond Windermere were glowing up in the morning sun. The frosty ground shimmered and the lake appeared still.

The summit of Staveley Fell was marked by a cairn.

To descend, we headed off to the north east to follow a wall which led in the direction of main track. As with the ascent, the ground here was uneven, but it was only a short distance back to the track.

We walked along the track until we reached a crossroads and we went straight on, with Christmas trees all around us.

Soon a deer fence rose high on our right hand side and we followed this boundary until it met Sow How Lane.

We turned right onto Sow How Lane to the farm at the bottom of the road.

Following signs for the public bridleway, we passed through the farm yard and turned left to follow a farm vehicle track across a field.

We passed through a number of gates along the bridleway as it led past the pretty Sow How Tarn and through Low Wood.

The bridleway weaved past Heights Cottage and west onto the access land for Raven’s Barrow (Cartmel Fell). Here we left the main trail and followed the lumps and bumps to the monument.

The monument on the summit of Raven’s Barrow (Cartmel Fell) is huge and also has a little seat built into it. From here you can enjoy the views of the surrounding fells. Whitbarrow was over to the east.

We retraced our steps back to the farm back to Sow How Lane. Just before the main road junction with Fell Foot Brow, we turned left following a finger post marked ‘Gummer’s How 1 mile’.

When the trail exited out onto the road, we crossed it to begin the ascent of Gummer’s How.

This area is part of the Higher Level Environmental Stewardship Scheme which means the work is ongoing to preserve the upland vegetation on Gummer’s How as it is of high ecological value.

Hardy Luing cattle assist with this, much to cow-fearing James and Katie’s dismay!

The trail up Gummer’s How is well maintained and this was by far the busiest section of trail of the day. Lots of families out enjoying the winter sun between Christmas and New Year.

Just below a crag, the path splits. You can either take the short, easy scramble or stick to the main path on the right. We chose the scramble.

Windermere was now a deep, rich hue of blue and the snow dusted Coniston fells looked majestic in the distance.

We stopped just short of the summit for lunch.

From our lunch spot, we could see the trig pillar of Gummer’s How, so we walked up to it and paused for a photo.

We could see all the way down Windemere to Claife Heights, one of my earlier Wainwright’s Outlying Fells walks.

To descend, we headed north east initially, before the trail led down to the south and re-joined the path we’d ascended on.

Luckily for James and Katie, we avoided a cow encounter on Gummer’s How!

When we met the road we walked south down Fell Foot Brow, until we had the opportunity to branch off to the left into the woodland of Fell Foot park.

We followed an old wall which was covered in moss.

Fell ponies greeted us to our left before the trail looped to the right onto a bridleway beside Poolfield Wood and out into Staveley-in-Cartmel.

We continued west past Millerbeck Light Railway and along the lane.

This led to a t-junction where we turned left and crossed over to walk along the footpath beside the main road into Newby Bridge.

Here we crossed the bridge itself and headed left in front of The Swan. We crossed another bridge over the railway line and took the next left following a finger post for ‘Finsthwaite 1 mile’.

Soon after, at a finger post marked Finsthwaite Summer House Knott we turned right and followed a slim path between two fences.

This path weaved steeply and reached a look out point just below Finsthwaite Tower, followed by the tower itself.

The tower is a two-storey folly. The site commemorates the 18th century wars and honours officers of the Royal Navy. You can read more about it on the Imperial War Museum website.

From here we headed north and then north-east, along pleasant woodland trails. When we reached a t-junction in the path we turned left.

This path led out of the woodland and over fields into Finsthwaite.

We passed the church and forked left.

Then turned right at the t-junction and left at the finger post marked ‘High Dam’.

A slim path led past houses and through a small gate onto a field.

We followed the grassy trail and kept heading north, over a bridge that crossed Finsthwaite Beck.

The trail followed the beck uphill before we had the opportunity to cross the beck again higher up.

We followed the trail to the south west, passing through a gate until we met the path junction. Here, we branched off the trail to reach what seemed to be the highest point of Finsthwaite Heights.

Finsthwaite Heights remined me of Dunmallet. A ‘summit’ in the trees.

We left to the south, following a trail that passed to the west of Summersides Wood. As we descended, we were treated to a beautiful view of Finsthwaite.

We reached the main road and followed it to the left back into Finsthwaite. Opposite the church we turned right to head across the field to the south.

A series of stiles and gates led us past Finsthwaite House and in to Wintering Park.

We ascended slightly before dropping back down to the place we’d initially peeled off for Finsthwaite Tower. We retraced our steps over Newby Bridge.

From Newby Bridge we turned left onto a side road which ran south with Great Wood on our right. After 350m we forked right onto a bridleway. We followed this through a series of gates onto access land past a small reservoir. Keeping heading south, we ascended gently and passed over a stone stile to gain the main ridge.

We lost the light just as we reached the summit of Bigland Barrow.

The summit of marked by a huge tower and we took in the last of the views before donning our head torches for the descent.

We left to the south of Bigland Barrow for 250m before passing through two gates and heading north-east. A stone stile and another gate led us to a lane which we followed north east alongside Miller Beck.

We followed the finger post for ‘Fair Rigg 1/2 m’ across a field and over two stiles, still walking in a north-easterly direction. We passed through a gate onto a track which we followed to the junction of Back Lane, where we turned left, crossed the main road and reached the car.

What next? My final Outlying Fells of Lakeland – Muncaster Fell, Irton Pike and Boat How.