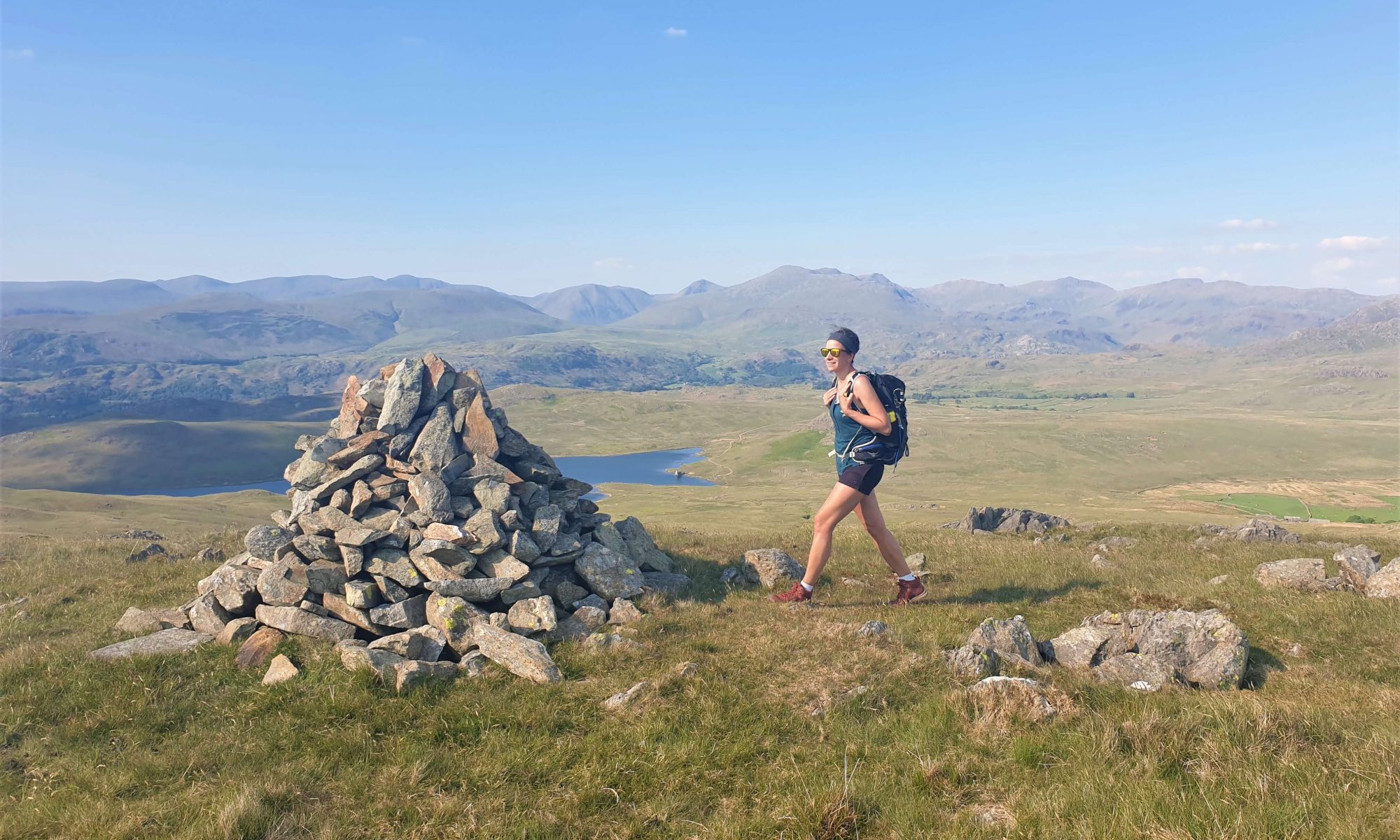 Adventurer Nic walked this route on Sunday 31st May 2020. These were Outlier numbers 3 to 14 of 116 for Nic. Here, she explains how you can bag these outlying fells too.

A day earlier we’d hiked Flat Fell and Dent, the first two Wainwright Outlying Fells of Lakeland on our peak bagging list, but it was time for something a bit more juicy.

The walk started at a small car park just off the Austhwaite Brow. There were a few cars there when James and I arrived at mid-morning but there were still some free spaces.

The weather forecast for the day was glorious. Sun cream and water were required in large quantities.

We set off in a south-westerly direction along a wide track in the direction of Devoke Water.

At an obvious scar in the grassy bank on the right hand side we peeled off the track, following the faint path which guided us gradually over grassy terrain. The views back across Eskdale were fantastic, right from the off.

Devoke Water, which was a bright royal blue in the gorgeous sunshine, is normally popular with anglers but there were none that day.

The ground was dry from the recent warm weather and we soon reached the summit of Rough Crag.

Out to the west was the large expanse of the Irish Sea and the faint outline of the Isle of Man. The small hump of Water Crag, our second Outlying fell of the day, can be seen clearly, behind the cairn of Rough Crag, in the above photograph.

After a short pause, we walked south-west to Water Crag, the second hill in the Circuit of Devoke Water.

To get there, we followed a faint path over grassy terrain, descending and re-ascending a mere 50m between the two fells. I noted that this was in stark contrast to the 600m cols between the giants of the Munro mountains of Scotland that we hiked the previous summer.

Water Crag had sea views that were even better than the panorama from Rough Crag. The sea was a lovely bright shade of blue.

From Water Crag we dropped down to the south-west, through wet grass that is probably quite boggy after a spate of wet weather but was fairly firm for us. We aimed for the western edge of the tarn where we planned to cross Linbeck Gill and head up the fells on the south side of Devoke Water, starting with White Pike.

We started hiking uphill on the other side looking for faint paths but there was nothing but a few misleading sheep trods. We paused for a drink and a snack and identified all the fells we could see from this vantage point, from Whin Rigg in the north, we cast our eyes right across the skyline of bigger fells over to Crinkle Crags.

Setting back off walking, we pushed to the summit of White Pike.

The top of White Pike was rocky and we were greeted by a slim columnar cairn.

The Summit – The Knott

From the summit of White Pike we left the usual trail for the Circuit of Devoke Water and made our first diversion.

We dropped down, picking our way around the crags and boulders on this side of the hill. We avoided the steepest parts by heading south around the rocks.

After reaching the grassy col we walked over a small hill which led to The Knott, our fourth outlying fell.

We had our lunch here – cheese and pickle sandwiches. A game James and I often played whilst sitting in front of a Lakeland view was to survey the scene and select which cottage out of the valley you’d most like to live in. On this occasion, James picked what looked like a stately home, while I opted for a more modest white washed cottage close to woodland. There were no prizes associated with this game of course, we could never afford a cottage in the Lake District National Park, but nobody can stop us dreaming. We admired the views a little longer, with the exception of Sellafield nuclear power station, which was visible to the north west.

After lunch we headed off to the south east, picking our way towards next fell – Stainton Pike. Tussocky, hard, grassy, ankle-breaking lumps slowed us down somewhat. I was grateful I’d opted for boots.

The ground then turned a little bit boggy. We crossed Stainton Beck at the point where it forked, before crossing a fence at the most appropriate point. We continued uphill following a grassy rake to the left of the summit of Stainton Pike.

Once we’d gained the ridge, we turned right to head south west to the summit.

From the summit of Stainton Pike, we dropped off summit heading for Whitfell, or Whit Fell, if you use the spelling Alfred Wainwright adopted in his guide book.

We crossed the fence by Holehouse Tarn and picked up a faint path which led to the top of Whitfell.

Whitfell’s summit was marked with a trio of features – a very large cairn, an adjoining wind shelter and a trig pillar.

From the summit of Whitfell, we followed a faint path over grassy terrain to the rather lacklustre Burn Moor – the seventh fell on this extended circuit of Devoke Water. It was quite rounded and featureless in comparison to its neighbours, but it made a nice change.

From Burn Moor, a view opened up of Duddon Sands in the south east.

From Burn Moor we followed a faint path to Buck Barrow, our eighth outlying fell of the day.

In stark comparison to Burn Moor, Buck Barrow was rocky on top, but there was plenty of space between the rocks to walk up to the summit without any scrambling.

We looked across to the west at our next target – Kinmont Buck Barrow.

We descended to find a large wall split Buck Barrow and Kinmont Buck Barrow, so we headed for a large gap in the wall before ascending.

It wasn’t long before we’d reached the large cairn that marked the summit of our ninth outlying fell. It was also the furthest point from the car where we’d started the walk.

Black Combe was visible from here.

We returned to the same gap in the dry stone wall and followed it north. We bypassed the bulk of Burn Moor and walked along a faint path that led all the way back to Whitfell.

By this point in the walk we’d noticed that there had been skylarks above us for much of the walk. In fact, they were the only other living thing we’d seen all day! Their melodic chirping was a great soundtrack to the walk.

As we re-ascended Whitfell from the south we passed another couple – these would be the only other people we encountered on the whole 20km route.

We descended back to Holehouse Tarn and then headed for Yoadcastle, keeping the crags on our left. We weaved around a couple of craggy tops before heading up onto the summit, officially rejoining the original Circuit of Devoke Water route from here on in.

Whilst on Yoadcastle, we scouted out two fells that we’d return to and hike another day – Hesk Fell and The Pike.

We left the summit of Yoadcastle and made our way with ease to our penultimate hill of the day and boy was it worth the wait! Woodend Height soon became my favourite fell of the extended circuit of Devoke Water.

The summit offered the best view of the trip – with at least 16 Wainwrights visible to the north, over Devoke Water – starting with the Wasdale fells and extending east, it was a feast for the eyes.

The Summit – Seat How

We headed down over pathless but firm grassy terrain to the valley bottom again. Seat How appeared to be a little rocky lump in the middle distance.

Seat How appeared craggy on all sides but we headed to its eastern side where it was possible to weave easily up through the rocks.

The view from the summit was lovely. We’d now appreciated Devoke Water from every possible angle, completing the full extended circuit.

We dropped down from Seat How, again finding the best way off to the east, before heading around back to the track where we’d started the day that morning.

A short walk to the car and that was that. 12 of Wainwright’s Outlying Fells of Lakeland in the bag!

Wrapping Up our Devoke Water Hike

Burnt shoulders and big smiles! That pretty much summed up the day as we stretched our tired muscles back at the car. The Lake District was truly on top form and we were thankful we were there to appreciate it.

What next? Clints Crags beckoned – this would be our next Outlying Fell.