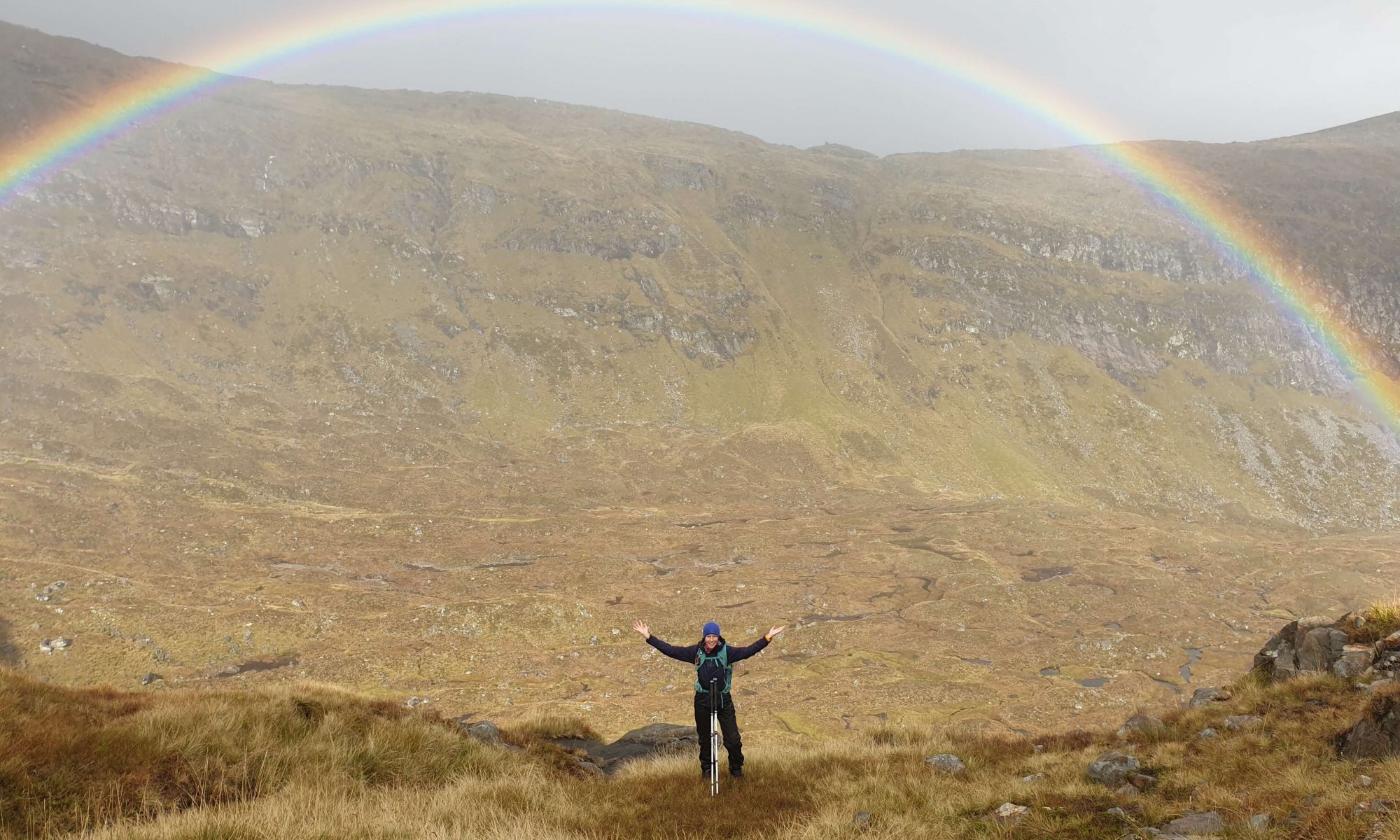 …and Friends – a Linear Route

Eididh nan Clach Geala is a Munro in the Scottish Highlands, not far from the northern hub of Ullapool. The mountain is close to Meall nan Ceapraichean, Beinn Dearg, Cona’ Mheall and Am Faochagach. This route card explains the quickest and easiest way of getting to all five summits for a peak bagger.

Adventurer Nic walked this route on Tuesday 1st October 2019 as part of her Munro Bagging Challenge. These were Munro numbers 251 to 255 for Nic. Here, she explains how you can bag these Munros too.

The previous day we’d allowed ourselves a rest day but had set off from Drumnadrochit and found somewhere to camp close to the beginning of the walk at Inverlael. It was an idyllic spot, close to woodland and a stream. We woke at 6am to our alarm. Neither myself nor James are what you’d call ‘morning people’. So we started packing up our tent, bleary eyed, in a trance and not really interacting with each other.

It had been a cold night, when we got back to the car, the temperature gauge read 0°C. We made our way to the walkers car park at Inverlael to start the walk.

The walk sets off on the Cape Wrath Trail from the car park at Inverlael. It’s an established track which leads through woodland before heading out onto the open hillside. At a fork in the route, we passed a lone male walker. We stopped to chat awhile before he forked right and we forked left.

At this early stage of the walk, there were clear skies above us but it was still quite cold. The good path continued, rising to 700m before we headed up over heather and rocky terrain to reach the higher ground of Eididh nan Clach Geala.

The first Munro summit of Eididh nan Clach Geala seemed to come quite easily as we marched on upwards over pathless ground to 927m.

White quartz dotted around the summit, which was a jumble of rocks.

We reached the summit just before 10am – decent progress indeed!

From the summit we descended to a col, avoiding the crags and that’s when the first rain shower hit us.

I don’t think my synthetic down jacket and my waterproofs have been on and off so much on a walk!

There seemed to be a bitter cold wind on and off and the odd shower coming and going. It was one of those days that was hard to dress for.

We reached the lowest point of the col beside a lochan and then hit a grassy rake up Meall nan Ceapraichean which was by far the route of least resistance and easy to spot in good clear weather conditions.

This then flattened out onto a ridge which led up to the second Munro of the day – Meall nan Ceapraichean.

We spotted lots of Rock Ptarmigan – a common ground nesting bird in the mountains Scottish highlands. Interestingly, if you spot one, the chances are you’ll spot another – we routinely tended see them in groups.

From Meall nan Ceapraichean we descended to a col, heading for Lochan Uaine, before the ‘out and back’ for Beinn Dearg. It’s one of 12 Munros with ‘Dearg’ in the title. The word literally translates to ‘Red’ from Gaelic. Beinn, one of the most popular words to be found in a Munro name as it simply translates to ‘hill’.

There was one long wall leading up the mountain from the col.

It was one of those moments where you sit and imagine the work it must have taken to put the wall up in the 1840’s.

Rocks jutted out on both sides of the wall and the ascent was a bit of a scramble in parts.

The rock was wet from the light drizzle so we continued carefully.

A large cairn marked the summit of Beinn Dearg, and now heavily in the clag we were keen to make a quick descent back to decent visibility.

We retraced our steps alongside the wall.

We met the MBA custodian for Shenavall bothy on the way down which was a lovely surprise. Last week we’d stayed there for the Fisherfield Munros. He was keen to advise us on a bothy to use for our upcoming Munro walk – Seana Bhraigh.

Next, we got caught in an out-of-season snow shower! But we were hungry so we huddled behind the wall to eat lunch. A bagel with some army surplus supplies tuna mayo that was one and half years out of date (yes I’m still alive to tell the tale!)

Back at the col we turned to head south east over rocky and grassy terrain to pick up a faint path for the ascent of Cona’ Mheall.

We turned to head north to bag the summit and passed a lone walker who was bailing on the rest of his walk due to the bad weather.

Hailstones were now coming down and it was downright painful!

After tapping the summit cairn, we retraced our steps back to the col and swung north from there, down into the valley between Cona’ Mheall and Cnap Coire Loch Tuath.

As we descended, the most perfect rainbow appeared from west to east, with us walking right underneath it.

Carefully, we picked our way down to the base of the valley through wet rock and grass, before walking along the southern shore of Loch Tuath. This led to the larger Loch Prille.

We crossed the inlet and walked around the top of the loch before starting the pathless trudge up the final munro – Am Faochagach.

At one point a grouse leapt out of the heather by my feet and the shock of it nearly knocked me to the ground!

We reached the summit cairn of Am Faochagach by 4pm and we were pleased with our progress.

We initially descended south from the last Munro, picking up a faint path which got stronger as we headed towards the A835. With our car in Inverlael at the beginning of the walk, we had arranged to meet a good friend Andy Dobb who had driven up that afternoon in his new camper van. The ground became increasingly slushy and boggy the lower we got. But because we had all five summits behind us, it mattered not. We made it over the river Abhainn a’Gharbhrain keeping our feet dry. We’d heard horror stories about the river in the lead up to the walk and it was on my mind for much of the day with us experiencing showers on and off. In hindsight it was nothing to worry about.

Andy met us part way to the car with a snorkel which brought a smile to both of our faces.

We nicknamed these Munros:

Find out why we nicknamed all 282 Munros here.

We wild camped in the same general location that we were the previous night, as the next day we aimed to hike the Fannaichs, only a short distance away. Andy stayed in the luxury of his camper van in a nearby car park.