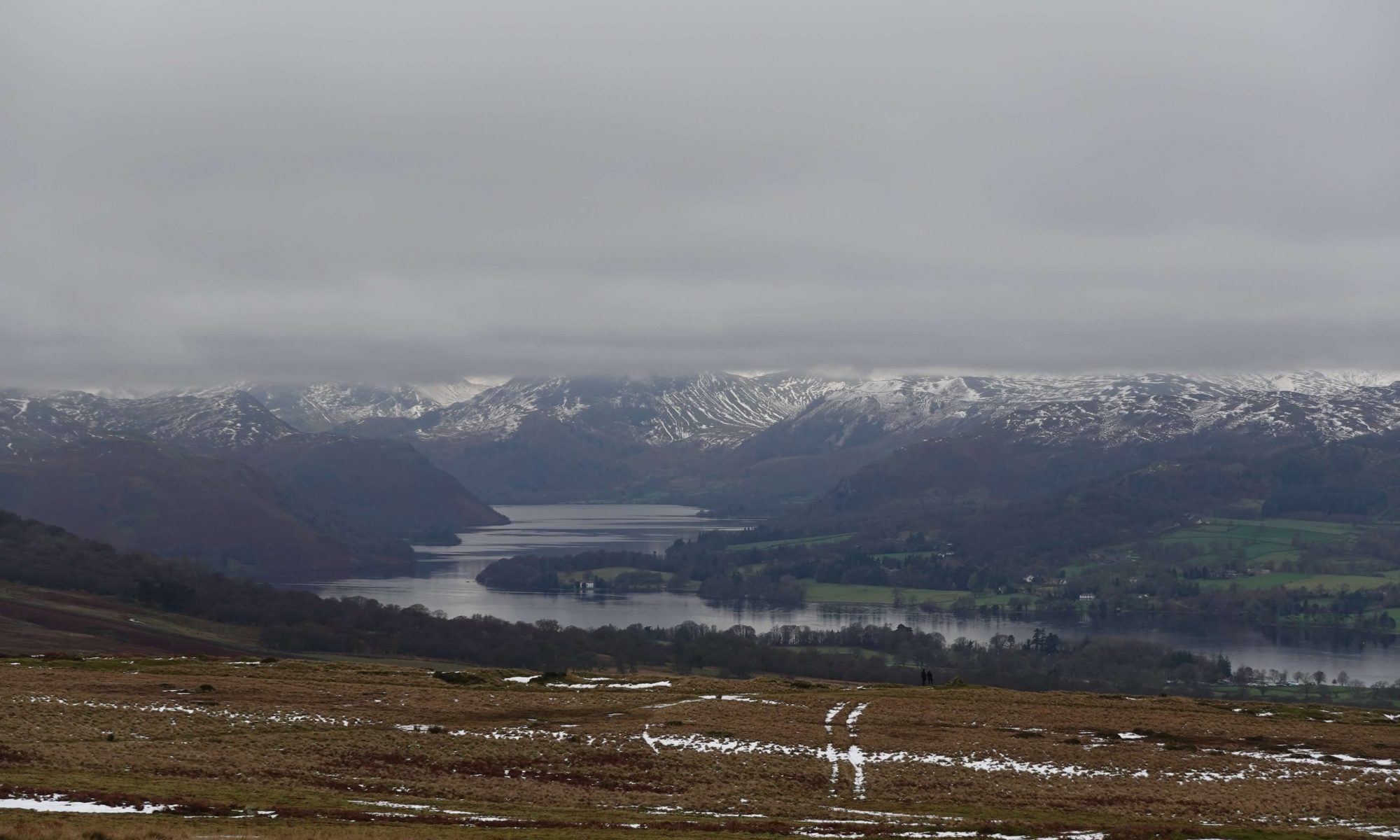 Adventurer Nic walked this route on Sunday 6th December 2020. These were Outlier numbers 95 and 96 of 116 for Nic. Here, she explains how you can bag these outlying fells too.

The previous day I’d hiked Carron Crag and the Top O Selside Fells and the dry wintery spell was continuing so I thought I’d capitalise on the lovely weather with another peak bagging outing as I travelled across Cumbria visiting the summits of each of the Outlying Fells of Lakeland.

The Start of the Route

I left the Lake District National Park Authority car park and turned right onto the main road through Pooley Bridge. Walking through the village, I passed St Paul’s Church and began to ascend uphill, following a sign for the Ullswater Way.

At the crossroads I continued straight on in the direction of Hill Croft Caravan Park. When I reached the entrance for the caravan park I kept right though, remaining on the road.

The view towards Ullswater started to open up through the trees as I walked towards Heughscar Fell.

At the end of the tarmac road I passed through a gate and continued along the main path, gradually ascending.

The view continued to open up to my right, a view of Ullswater and the surrounding fells, with their tops shrouded in cloud.

I paused to take a layer off. I was already too hot. It was a rather mild December afternoon despite the lack of sun.

Along the route there were a few options to turn off the main trail but I ignored them and continued ascending gently over a stony trail that almost felt like cobbles in parts until I arrived at a fingerpost.

I followed it in the direction of Askham Fell but then almost immediately peeled off the trail to the left in order to follow a grassy path to the north east.

I kept reminding myself to turn around regularly here as the best of the view was behind me on this section of the route.

It was here where I encountered small sections of snow, so I couldn’t resist marching through the virgin snow like a child.

The cairned summit of Heughscar Hill came into view as I continued uphill, and the trail led around to it from the south.

The view from the summit of Heughscar Hill was very nice, with the best feature being the curvy Ullswater down in the valley.

It was a Sunday so there were plenty of families and dog walkers out enjoying the fells but I appeared to be the only peak bagger amongst them. Most had no interest in reaching the true summit and so I had a moment with it all to myself.

I headed off the summit to the north over grassy terrain. The view of Ullswater was actually better here as I could see more of the lake.

I followed the trail for 600 metres before it peeled off to the left below a small crag.

At the path crossroads beneaeth the crag I turned left and here the route became a little muddy but the view more than made up for it.

I glanced across to Dunmallard Hill which was covered in trees in the distance. This was next on my peak bagging agenda.

I continued to head west, following a right hand fork at the next path junction until I met the corner of a wall.

I followed this wall down the hill and re-joined the main track at the bottom. Passing through the gate I retraced my steps back to the bridge at Pooley Bridge.

Some might want to end their walk there, or stop for a brew (or a pint) in Pooley Bridge before continuing on to Dunmallard Hill.

I headed over the bridge, which was only recently rebuilt in October 2020. The 128ft bridge replaces the stone bridge from the 18th Century that was damaged during Storm Desmond in 2015.

Inscribed in the bricks are people and businesses who helped raise the required funds for the new bridge.

Views on both sides of the bridge are delightful.

When the road bent to the left I crossed it and joined the path beneath Dunmallard Hill.

I took one last look across at the bridge from here before I headed up the forest path which rose steeply into the woodland.

The main trail loops all the way around, spiralling up the hill right to the summit.

This is probably one of the most underwhelming of all of the Outlying Fells of Lakeland summits that I’ve visited so far. People normally go hillwalking for the expanse of views. But Dunmallard Hill basically just a woodland on a hump therefore you know you’re at the summit when you can climb no further.

Wainwright refers to the fell as Dunmallet and other spellings include Dunmallock and Dunmalloght. In this article I’ve stuck with what’s printed on most maps – Dunmallard Hill.

I continued over the summit and down the fell to the north. This was slightly steeper than the ascent and a lot of fun in the mud.

The trail soon re-joined my route of ascent and from here I turned right and retraced my steps back to the car.

Next on the list was Humphrey Head and Hampsfell – the most southerly of all the Outlying Fells of Lakeland.