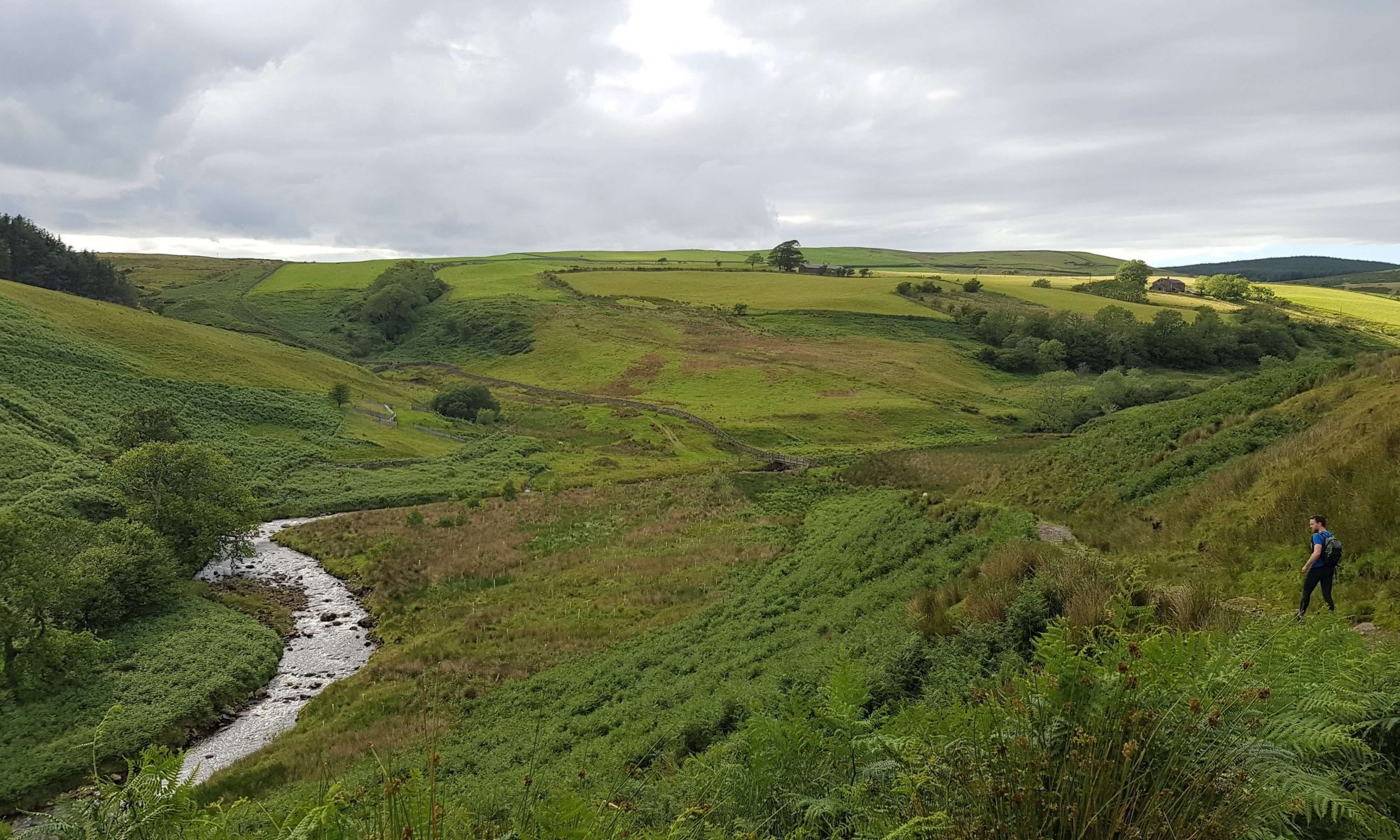 Adventurer Nic walked this route on Monday 6th July 2020. These were Outlier numbers 49 and 50 of 116 for Nic. Here, she explains how you can bag these outlying fells too.

It had been a while since our last walk – Walna Scar and nine other Outlying Fells a week and a half earlier. So we were ready for another reasonable leg stretch.

We parked up in the good sized parking area near the cattle grid and ours was the only car there. A good sign that we would be the only people out on the hill.

To start the walk we crossed over the cattle grid and followed a finger post up a track in a south-easterly direction.

After following the track for a short while, it was necessary to peel off it and hit the open hillside on the northern side of Cold Fell.

The ground was a little mushy after the recent rain, with fairly uneven grassy tufts right up to the summit.

The summit of Cold Fell was marked by a small cairn that consisted of a few rocks and one skull that looked like it had come from a sheep.

The view to the surrounding fells was partly blocked by some woodland on the eastern side of the fell, so the dominant view was down over Sellafield power station and out to sea. Consequently, Cold Fell is probably down as one of the most disappointing of the Outlying Fells when it came to offering up a good summit vista.

Cold Fell and Ponsonby Fell aren’t commonly hiked together, but they seemed close enough for us to link them, so after a short while studying the map we gave it a go.

Linking The Fells – The Descent

We descended from Cold Fell to the south-west and aimed for the minor road that runs along the bottom of the fell.

For some reason on this route there was an abundance of cow pats with fungi growing in them.

Not something I normally notice a lot of but there were countless of them here!

The slopes were gentle but the ground was still grassy and uneven so we took it steady.

Lining the roadside were a flock of recently sheared sheep.

Linking The Fells – The Flat

We walked along the road for around 1km before we turned up another minor tarmacked road towards Beckcote Farm.

We passed the main farm buildings on a track lined by hedgerow and trees before turning right through a gate and down a path where nature had created a tunnel for us to pass through.

Passing through another gate, we found ourselves in a field.

We hugged the right hand boundary before turning left at the bottom of the field. Mature trees separated us and a herd of cows. We crossed the stream at the bottom end of the field and went through a gate on the other side which led over a bridge and up a stairwell with a useful hand rail.

We passed over a stile at the top and came out into another field.

Keeping left, we followed the right of way down towards and through woodland.

We watched squirrels jump and scurry from tree to tree as we made our way down to a wider track and out onto a road.

Crossing over Stakes Bridge, we walked along the road for a short distance before peeling off through a gate and towards the next stile.

This stile led into a field and we followed the perimeter of the field up to the left, rising uphill once again.

Linking The Fells – The Ascent

White butterflies danced around us as we made our way, following the path through overgrown bracken. We passed over a stile which was a traditional wooden stile on one side and a ladder stile on the other and followed the stream uphill under the shade of the trees.

This led to a larger track where we passed through a gate and headed east towards Ponsonby Fell.

At this point the trail was lined by gorse bushes and small trees and we spotted a hare up ahead.

The trail passed through multiple gates and was often lined on both sides either by bushes, walls or fences.

It ultimately led us into a large field, where in the top left corner there was a walled passage that led to a larger track and some ruined farmed buildings.

Passing through what would have been the courtyard of the ruined buildings, we made it to a stream. Here there was an option to proceed on the north side of the Birrel Sike before crossing it. Alternatively, we could cross it here and walk on the south side. We chose the south side as the ground was very wet and the south side was higher, but it was quite overgrown. Both sides have their pros and cons but they both lead to the foot of Ponsonby Fell.

From here we made a beeline to the summit of Ponsonby Fell over lumpy grass.

The summit of Ponsonby Fell far exceeded my expectations. It was amazing! Scafell and Scafell Pike were both visible with Mickledore (this was not mentioned at all in Alfred Wainwright’s description of the view so it was a wonderful surprise!).

The screes of Illgill Head and Whin Rigg also domineered.

Black Combe was also visible to the south.

We descended to the north-east over pathless terrain with Haycock in front of us. The cattle grid on the road at the bottom of the valley was the feature we were aiming for as this would lead us back towards the car.

After trudging through the high grass that was wet in places we were ready for the firm track that led past the farm house and into Scalderskew forest.

We followed the beautiful trails through the woodland.

After a lovely walk through the tall trees, we then peeled off to the right to cross Worm Gill.

After all the rain we’d had recently this was easier said than done! Some of the stepping stones were submerged so we waded through on this occasion before picking the trail up on the other side through bracken.

The trail rose slightly to traverse along the lower slopes of Lank Rigg.

The views down the river were absolutely stunning the fading light.

The trail led down into the valley and we crossed a bridge.

After we crossed the bridge, the trail led us directly back to the car.

What a day! Mashing these two Wainwright Outlying routes together made for a great adventure. Next on the list was Green Quarter Fell in the Kentmere Valley.