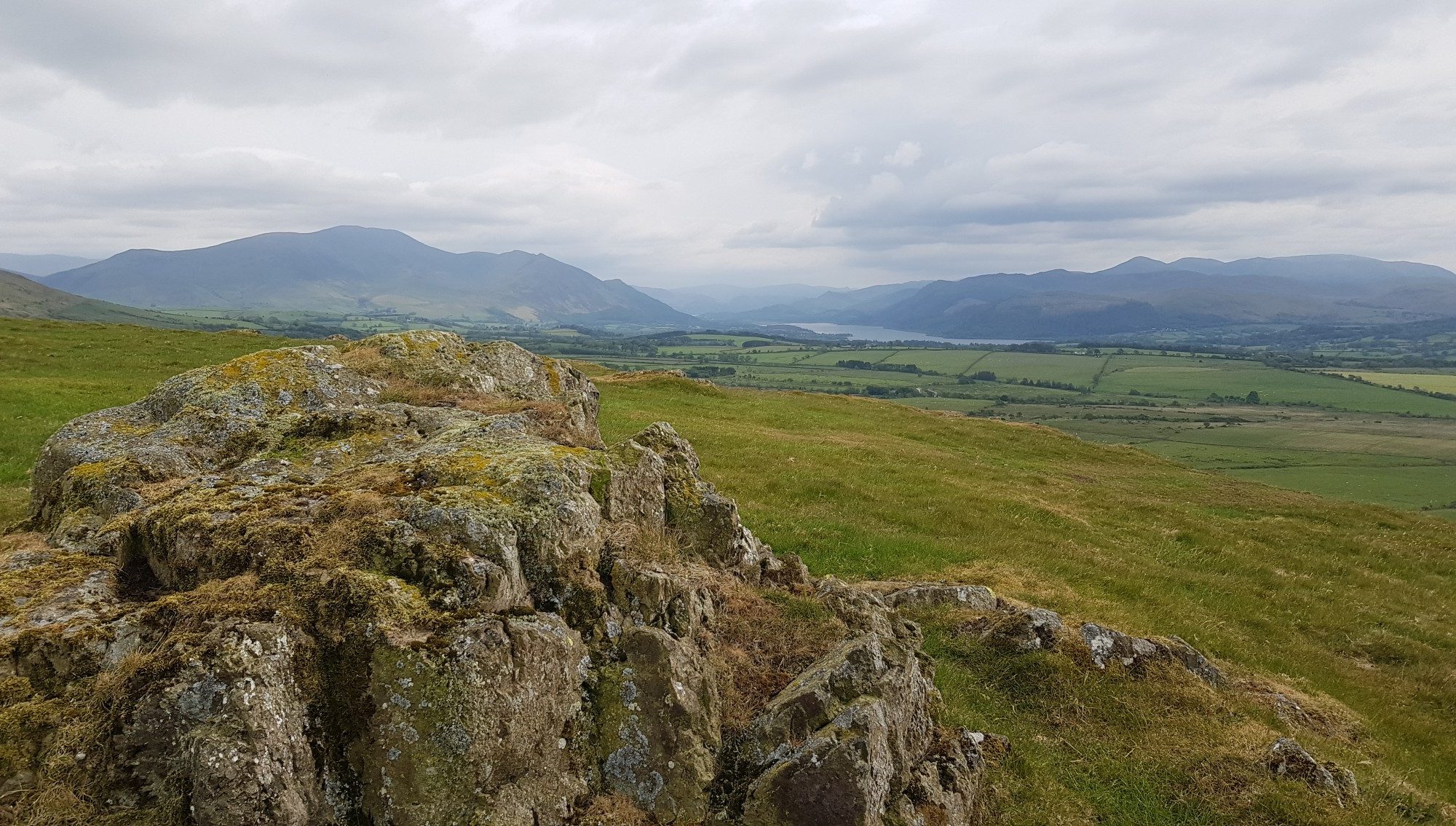 The two tops of Caermote Hill, the main top and the north top which is also known as St. John’s Hill, are included in Alfred Wainwright’s Outlying Fells of Lakeland book. Caermote Hill is situated on the northwestern edge of the Lake District National Park. This route card suggests the shortest route for someone peak bagging the Outlying Fells of Lakeland. It should be noted from the outset that these fells are not on open access land and permission should be sought from the landowner before proceeding.

Adventurer Nic walked this route on Thursday 11th June 2020. These were Outlier numbers 22 and 23 of 116 for Nic. Here, she explains how you can bag these outlying fells too.

The Wednesday of this week was a terribly grim weather day. We didn’t venture outdoors at all, but Thursday was better. The cloud base was high and it was windy but at least we’d get a view. The previous weekend we’d had a lovely evening bagging Reston Scar and Hugill Fell on our quest to tick off Wainwright’s Outlying Fells of Lakeland.

We parked in a layby after turning off the A591 and set off uphill along the road until we reached a gate. Gingerly, we negotiated a thin line of barbed wire and gained access to the edge of the field.

We walked uphill, keeping to the right of a fence until we spotted a break in the wall up ahead. Crossing the collapsed wall, we ascended easily up to the summit of Caermote Hill.

Behind us, wonderful views across Bassenthwaite Lake emerged, with a dark and fearsome-looking Skiddaw looming above it.

The summit of Caermote Hill is marked by a memorial rock. Weathered plaques remember locals whose ashes were scattered here. One is Walter S Dean 1890-1967, another is Jack Routledge 1905-1965. Memorial plaques to Ethel M Dean and Gwen Routledge join them.

We walked along the hill towards St. John’s Hill but soon spotted cows.

We’d read previous route reports referencing a bull in the field so knew to be cautious and considered turning back. It was clear there were calves in the field. But we patiently waited for them to head down the field before we passed through the gate and reached the second summit.

At the top of St. John’s Hill was an uninterrupted view across the Solway Firth to Criffel, a large hill in Dumfries and Galloway. The strong winds were giving the west coast turbines a good run for their money.

The view to Bassenthwaite Lake had disappeared at this point, but Binsey and Skiddaw still looked really grand from this top.

We headed down and found a gate in the wall, before picking up our route of ascent back to the car.

It wasn’t the best of walks what with the cows and barbed wire to negotiate. Consequently, we were left wondering why Alfred Wainwright picked these two tops as he wasn’t very complimentary of the walk in his book either. In short, the view to Bassenthwaite Lake is adequately covered by Clints Crags which has the added bonus of having no access issues to contend with. Only hardcore peak baggers will head to these two fells.

Next in our peak bagging adventure, we ventured to Scout Scar and Cunswick Scar.