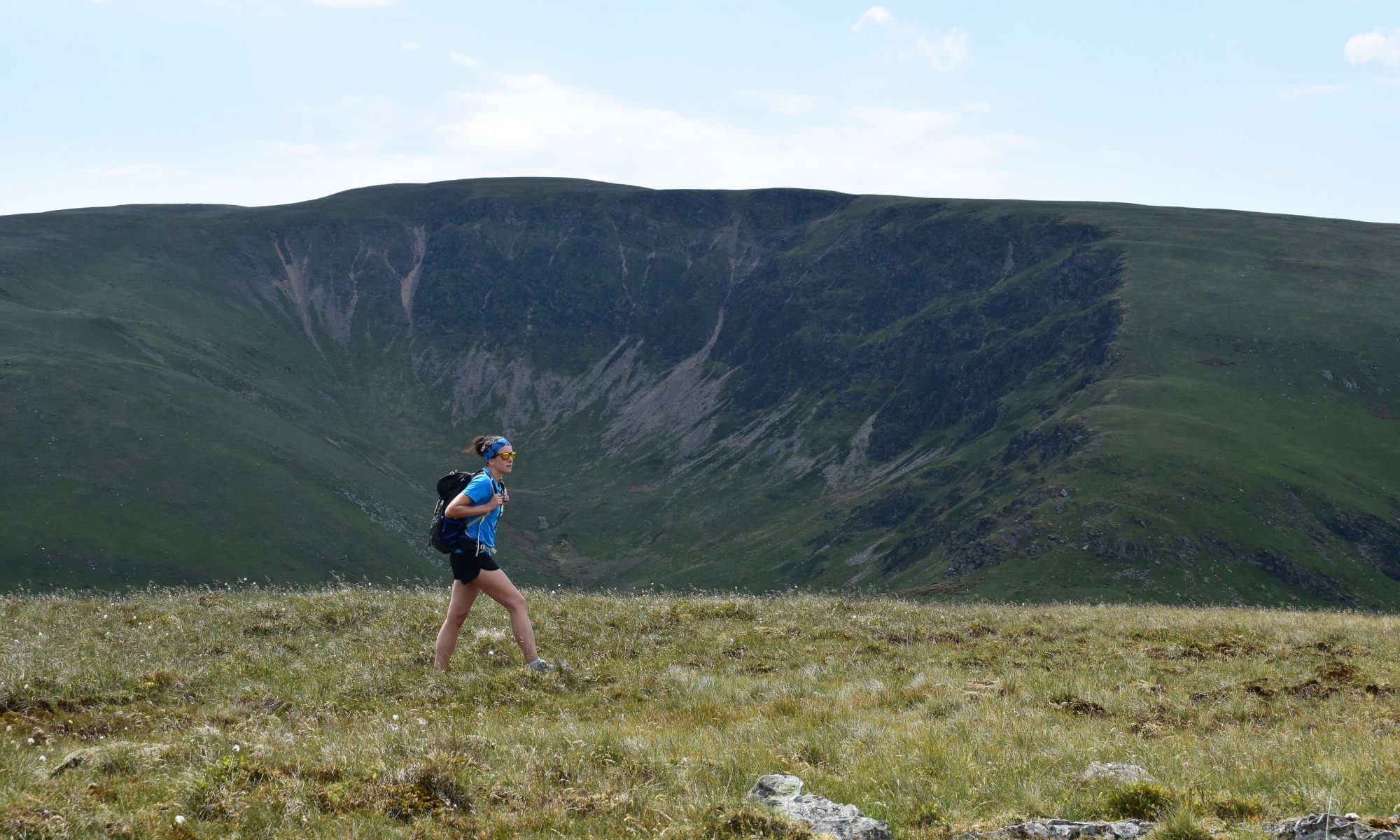 Adventurer Nic walked this route on Sunday 14th June 2020. These were Outlier numbers 26, 27 and 28 of 116 for Nic. Here, she explains how you can bag these outlying fells too.

We’d heard good things about the views from Black Combe so selected a good weather day for this fell-bagging outing. The previous day we’d hiked Scout Scar and Cunswick Scar as part of our project ticking off the Outlying Fells of Lakeland.

We parked in a small car park at Beckside and set off heading east.

The walk begins half a kilometre up the road. It is possible to avoid the road either partially or fully on a right of way through farmers fields. Sticking to the road would be the most direct route but it’s very tight with lots of blind corners and felt a bit dicey.

We crossed road onto an overgrown path.

It looked like nobody had walked this route in well over a decade.

The hedgerows were virtually meeting in the middle of the trail with nettles, holly bushes and brambles galore. We used our walking poles to fight our way through, picking up a few scratches on the way. The fox gloves on the route were beautiful though!

After a barely a quarter of a kilometre of slow going along the overgrown path we exited through a gate and followed a trail which rose uphill surrounded by bracken.

It was a glorious day, with blue skies and fluffy white clouds all around us and boy was it hot!

The trail zig-zagged before we peeled off it to aim for the summit of White Combe. We struggled to find the faint path at first but it was there. Why is it that hillside paths are so much easier to spot from above than from below, I pondered.

From here we looked down and out to sea over the top of White Hall Knott, a small hill that looked rather impressive from this angle.

The highest point of White Combe appears to be the point marked ‘428’ on the map but the Outlying Wainwright summit is a little further south at 417m and is marked by a large wind shelter.

From the summit we could see the Coniston fells and the distinctive outline of Caw, an Outlying Fell that we had yet to hike but that many had told us was their favourite.

We could also see clearly down to Duddon Sands and panning to the right, an unfathomable number of wind turbines out in the sea, there seemed to be hundreds of them along the horizon.

I’ve loved seeing the Lake District from so many different angles whilst hiking the Outlying Fells of Lakeland.

On the other side of the valley was the looming bulk of Black Combe. From here, you can certainly see where Black Combe gets its name, with its dark rock thought to have been formed over 400 million years ago.

It was a straight-forward hike along to Stoupdale Head.

The ground was grassy but firm on the approach and then turned a little bit peaty and soft on top. But we were lucky we were walking at the end of a dry spell.

It looks rather lack-lustre on the map but Stoupdale Head was a pleasant surprise.

A very small cairn marked the summit on a very flat plateau which was peppered with cotton grass.

I enjoyed the view to Buck Barrow and Kinmont Buck Barrow which we’d hiked as part of an extended circuit of Devoke Water two weeks earlier, and beyond that, the view to the Scafells was marvellous. You can even see Helvellyn peeking up on the skyline in the distance.

As we left Stoupdale Head, the blue skies were replaced by black clouds that had come from nowhere. There weren’t any storms forecast for that day but it certainly looked ominous. We donned our waterproof jackets and carried on towards Black Combe. The ridge was wide and the path was clear.

Then came the thunder. We’d been caught in a surprise thunderstorm once before and knew the drill. Immediately we dropped our poles and electronics and sought lower ground.

We crouched down on our tip toes and waited while the rain poured hard down on our heads and thunder roared around us. Despite this, we didn’t see any lightening on this side of the hill. Both of us were thinking about the way forward. Should we bail on the last summit? Should we sit it out? The most bizarre thing was that the whole time we could see the bigger Lake District fells bathed in sunshine! It felt like we had one of those cartoon black clouds sitting over us while everyone else was unaffected.

As the rain eased and the thunder and lightening had clearly passed over, we made the decision to continue to the summit.

Moving as quickly as we could we made it to the summit trig pillar.

With a quick glance at the views we didn’t hang around for long just in case the storm made its way back over to us again.

We left the summit in a south-easterly direction before following a quad bike track for a while.

We then turned to head down towards Whitecombe Beck in the valley below.

It was largely a pathless descent but over grassy, firm terrain that steepened towards the bottom as the path was guarded by bracken.

As we looked up towards Whitecombe Head, we noticed the hills we such a lush green due to the swathes of bracken that grows here.

We reached the path and followed it all the way back to the car.

After finishing the walk we drove to meet friends Jess and Liz in Torver. They had been stand up paddle boarding on Coniston Water the whole time we were caught in the storm but they’d never felt a single drop of rain. As a result, they couldn’t believe how wet we were. A reminder to the less experienced to never trust a forecast and always go prepared for a change in the weather. Our next Outlying Fells would be ticked off during the Bannisdale Horseshoe the following week.