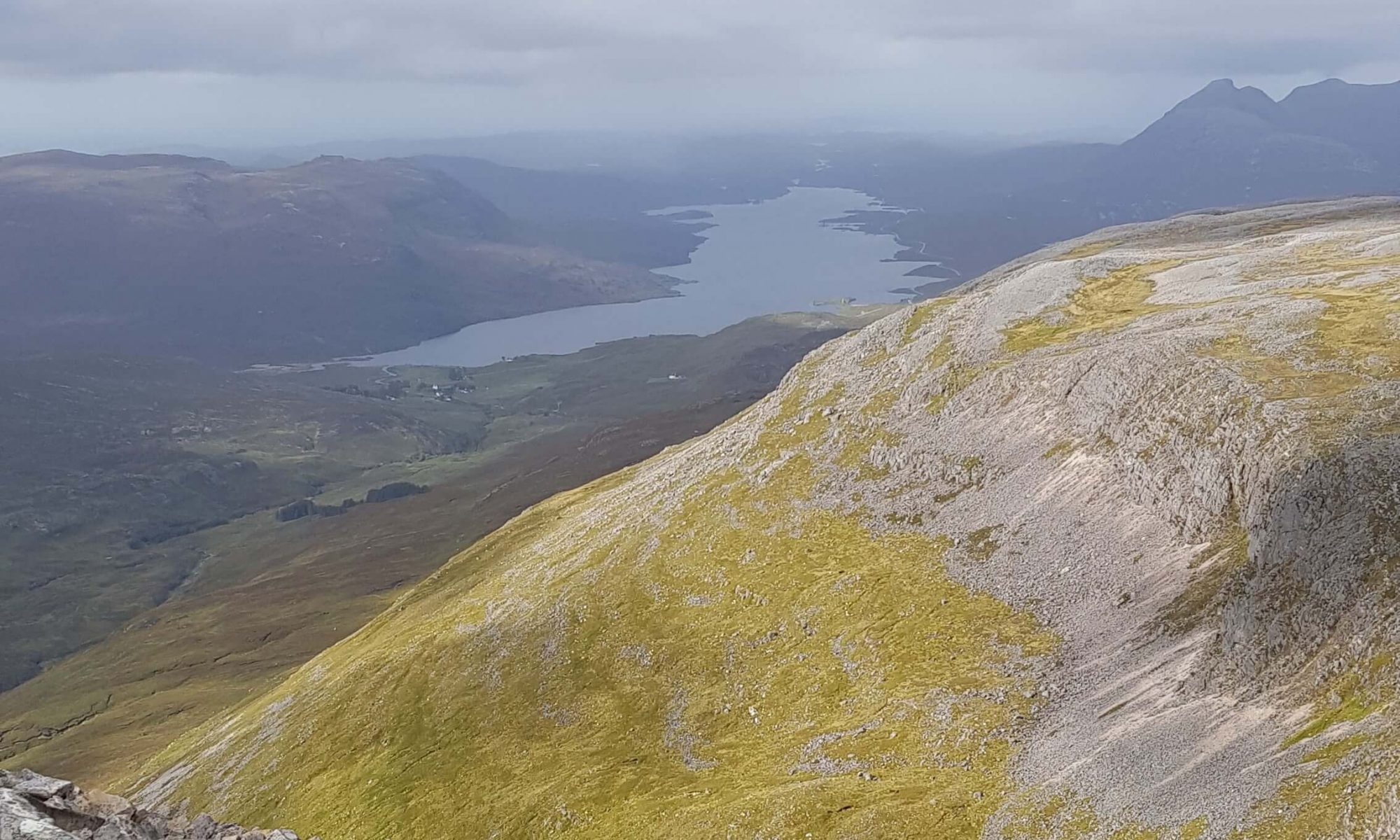 Ben More Assynt and Conival are two Munros which neighbour each other in the Assynt area of the northern Scottish Highlands. This route card explains the quickest and easiest way of getting to both summits for a peak bagger.

Adventurer Nic walked this route on Tuesday 17th September 2019 as part of her Munro Bagging Challenge. These were Munro numbers 220 and 221 of 282 for Nic. Here, she explains how you can bag these Munros too.

The day before this walk, we had driven up to Loch Assynt from Cockermouth, Cumbria. It was 350 miles and over 6 hours of solid driving. With a fuel stop (one), coffee stops (a couple) and a McDonalds stop in Inverness (crucial) – the entire journey took closer to 8 hours. It was dark when we reached the car park at Loch Assynt.

There were a few camper vans in the car park when we arrived. As I’d been there before, I knew to follow the path down to the Loch side and set up camp opposite Ardvreck Castle. There was a cool breeze. I noticed the tent structure didn’t look quite right. In our tired haze we’d fitted the central pole (the one that gives width to the tent) upside down. With a few frustrated huffs and puffs we corrected the schoolboy error and made our beds. For this leg of the adventure I had decided to swap out my Thermorest Neo Air Uberlite in favour of the X Therm plus my winter sleeping bag.

I slept well, but James had a fitful sleep and woke really early. We didn’t dither and got our camping kit put away, then I did the opening door reveal of Castle Ardvreck – a nice surprise of James who hadn’t seen it in the dark when we’d arrived.

It had rained in the night so the tent was a little damp, so we stored the inner and outer separately. We spotted two majestic stags by the castle as we de-camped.

After walking back to the car we ate breakfast and drove to the start point for the walk (a small car park, just south of Inchnadamph).

We packed our day bags and set out, crossing the main bridge over the River Traligill.

We walked past the Inchnadamph Lodge. It was nice to know we were booked in there later so that James could work on an article for Sidetracked magazine.

Keeping on top of his day job during big adventures is a struggle for James and I feel lucky to be able to focus on the challenge full time.

The initial part of the walk is on the Cape Wrath Trail, the section linking Inchnadamph with Kinlochewe to the south and Cape Wrath to the north. It’s a trail I’d love to walk in full in the next couple of years – from Fort William up to the iconic lighthouse at Cape Wrath. The full trail is approximately, 330km / 200miles in length.

The initial track soon turned into a path and we crossed a concrete bridge to follow a muddy path beside a stream, before walking carefully over wet slippy rock. It was a good 5km walk in before the terrain started to get steeper. We were feeling strong and overtook a couple, who were taking a rest on a rock before overtaking a single male hiker on the ascent up to the col at 750m.

We gained the ridge and walked south along to the summit of Conival, our first Munro of the day.

We met a couple, eating lunch in the shelter which marks the summit of Conival.

After pausing for photo we headed east along the ridge towards Ben More Assynt.

The terrain became increasingly rocky. It was drizzling on and off, with cloud sweeping over both Munro peaks.

Our Cicerone guide book described the ridge perfectly – ‘The ridge from Conival to Ben More Assynt is a wonderful airy traverse to a high, remote hill. At times it narrows a little, but never deliciously so’. I couldn’t have said it better myself.

We make it to the summit of Ben More Assynt in the best weather of the day with clear views over the vast remote landscape.

Because it’s a linear walk, we saw the same people we’d passed earlier in the day along the descent as we retraced our steps. First following the ridge back to Conival and then off the mountain towards in the Cape Wrath Trail and Inchnadamph.

We nicknamed these Munros ‘Ben More Or Less’ for Ben More Assynt and ‘Evil Kenevil’ for Conival. Find out why we nicknamed all 282 Munros here.

We took the car the short distance to Inchnadamph Lodge and checked in. Similarly to an earlier stay, we were in the annex. A different room but conveniently situated next to a small kitchen.

Ironically, I was carrying a small injury, not caused by the extensive mountain climbing activities but by an ill-fitting wedding outfit I’d worn the previous weekend!

As James headed to the main hostel building to work on his writing, I hung the tent up to dry (from the previous nights rain) and wrote my journal. Another task was to update my Munro bagging spreadsheet with much of the detail that makes it into these posts. I then cooked a Pasta Bolognese Summit to Eat meal and served it with extra spaghetti for a calorie boost.

It was then that we had a surprise email. It was from Adrian Trendall of All Things Cuillin to say that he had a cancellation and was free to guide us on the Isle of Skye at the end of the week. This would mean us completing our Black Cuillin Munros! But it was risky taking the slot. Not an easy decision as the forecast was for one foggy day with a chance of rain, and one dry and sunny day. After very few opportunities had presented themselves to climb on Skye this summer, we decided we had to go for it. So a new plan was formed… an early night tonight and Ben Wyvis tomorrow.