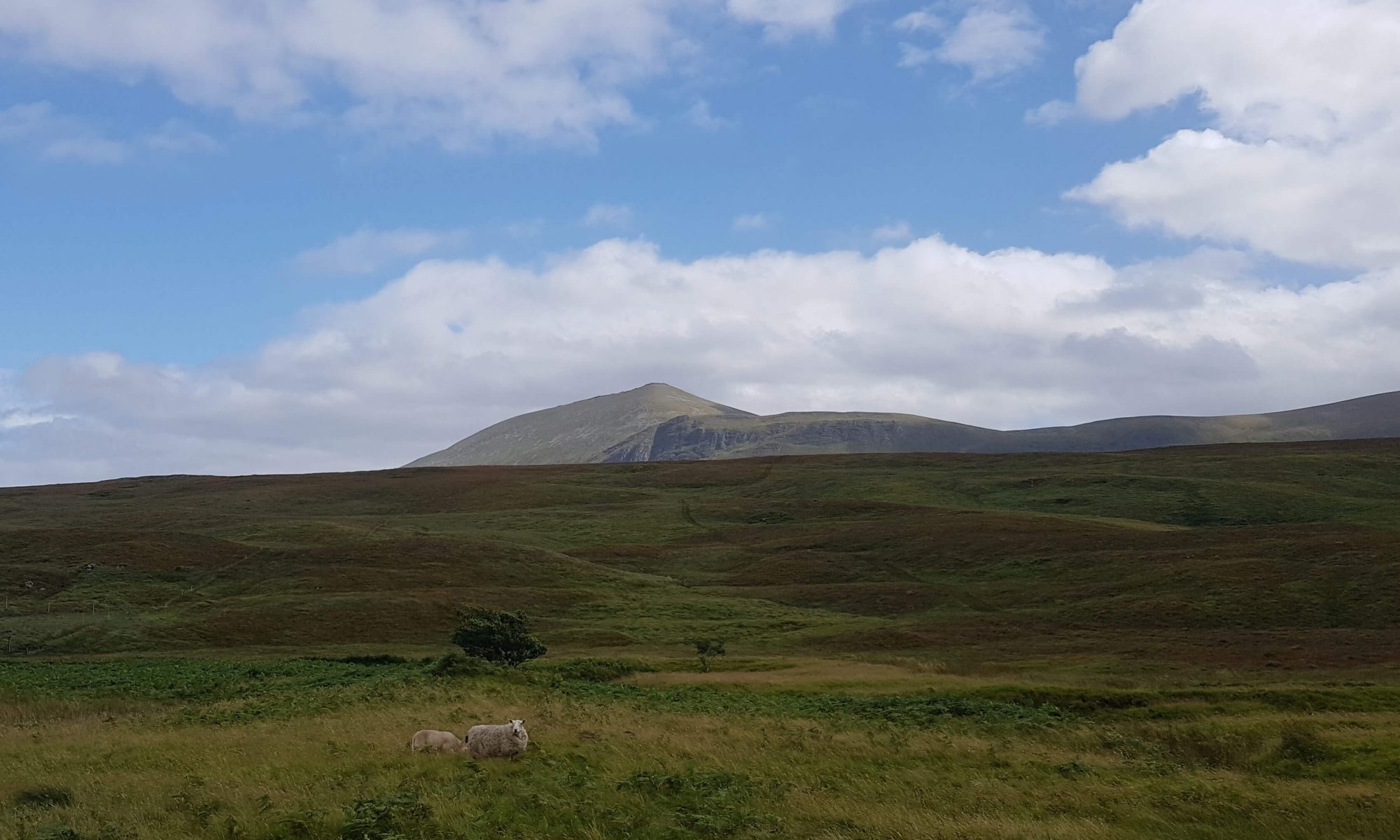 Scotland’s second most northerly Munro is Ben Klibreck. This route card explains the quickest way of getting to the summit for a peak bagger.

Adventurer Nic walked this route on 22nd August 2019 as part of her Munro Bagging Challenge. It was Munro number 191 of 282 for Nic. Here, she explains how you can bag this Munro too.

James and I left Achnasheen on a Thursday morning (22nd August 2019), after spending a night at Ledgowan bunkhouse. We were buoyant after climbing Slioch the previous day in good weather. After a breakfast of cereal, it was a two and a half hour journey up to the start of the Ben Klibreck walk and we had two Munros on the agenda. Ben Klibreck in the morning and Ben Hope in the afternoon.

Inevitably, the roads got narrower the further north we drove, but there was barely any traffic heading from the area we were visiting, so it was a surprise when we needed to yield at a passing place. Initially, we struggled to find the parking spot for the start the Ben Klibreck walk. Our Cicerone guidebook had printed incorrect coordinates of the lay by on the A836 for the walk start point and we were too far north.

One of the motivating factors for producing this website was to push out useful and accurate information to fellow Munro baggers. Consequently, if you notice an error on this page, please let me know by email so I can correct it.

We were grateful to be able to stretch our legs as we set off through tall grass to cross River Vagastie over stepping stones. But due to a lot of recent rain, the river was in spate. Knowing I’d have to get my boots wet right at the start of the walk, I returned to the car to change into my non-GORE-TEX trail running shoes. These are able to dry out much quicker than boots after a dunk! I find GORE-TEX boots or shoes simply hold in the water when they get submerged and this slows me down terribly. James actually managed to get across by taking long brave leaps across the wet stones but I tried, failed and ended up marching straight through in my trainers. The river was up to my knees but it wasn’t too cold which was a blessing!

We started the pathless trudge past the southern shore of Loch na Glas-choille over to the northern shore of a bigger body of water, Loch nan Uan. This loch had a lone, white upturned rowing boat on its shore. ‘How had the owner got it there?’ I wondered. From the edge of the loch, we mapped out a general route by eye which went up the pathless hillside to gain the ridge of A’Chioch at its lowest point. A mixture of wet rock, grass and heather, the ground was steep and slippery.

Heavy showers hit on and off throughout the morning. The wind picked up as we gained the ridge and veered north along it. The ground undulated before we started the final ascent, following a faint path from here.

Ben Klibreck’s Munro summit is actually Meall nan Con. The true summit is a large rock 5 metres east of the trig point. So in this case, I did what I always do, jump on all of the large rocks in the vicinity to be sure I’ve hit the true summit!

I remember, it was extremely gusty on the top itself, but there was a shelter cairn and a broken trig pillar. Laid on its side in three parts, the trig pillar looked how we felt after 191 Munros in close succession…..broken! That said, we’d made good time despite the conditions.

I found the views from Ben Klibreck to be slightly underwhelming, there are few other hills nearby and nothing close to matching the dramatic, awe-inspiring peaks of the north west that we’d been treated to earlier in the challenge. The weather gods had treated us to perfect conditions on Liathach in the Torridon area only two mountains ago. That said, if you always compared everything to Liathach you’d live in perpetual disappointment!

We returned to the car by the way of our ascent. James commented that the Sutherland area didn’t feel as remote as he thought it might. It was his first visit to the far north of Scotland. In contrast, I had explored as far north as Sandwood Bay before on a solo wild camping trip in 2018. We both agreed that it didn’t feel like we’d ventured too far from the A836.

I was frustrated during the descent. I’d jarred my shoulder when I slipped on wet grass and then the insole of my shoe kept creasing up which made walking uncomfortable. After adjusting it on a number of occasions, I finally lost my rag with it and removed it entirely.

Following a slip on the wet grass, I continued down the steep grassy hillside on my rear for a short distance, which was by far the most enjoyable part of the descent! It put a smile back on my face as we reached the loch and retraced our steps towards the river. On this occasion, we both kept our feet dry on the river crossing, which was slightly further south this time, before returning to the car.

The day wasn’t over yet! We changed out of our wet clothes and shoes and headed further north to bag Ben Hope – read the walk report here.

We nicknamed Ben Klibreck ‘Ben Kill Bill’ – in homage to the Tarantino blockbuster. Find out why we nicknamed all 282 Munros here.