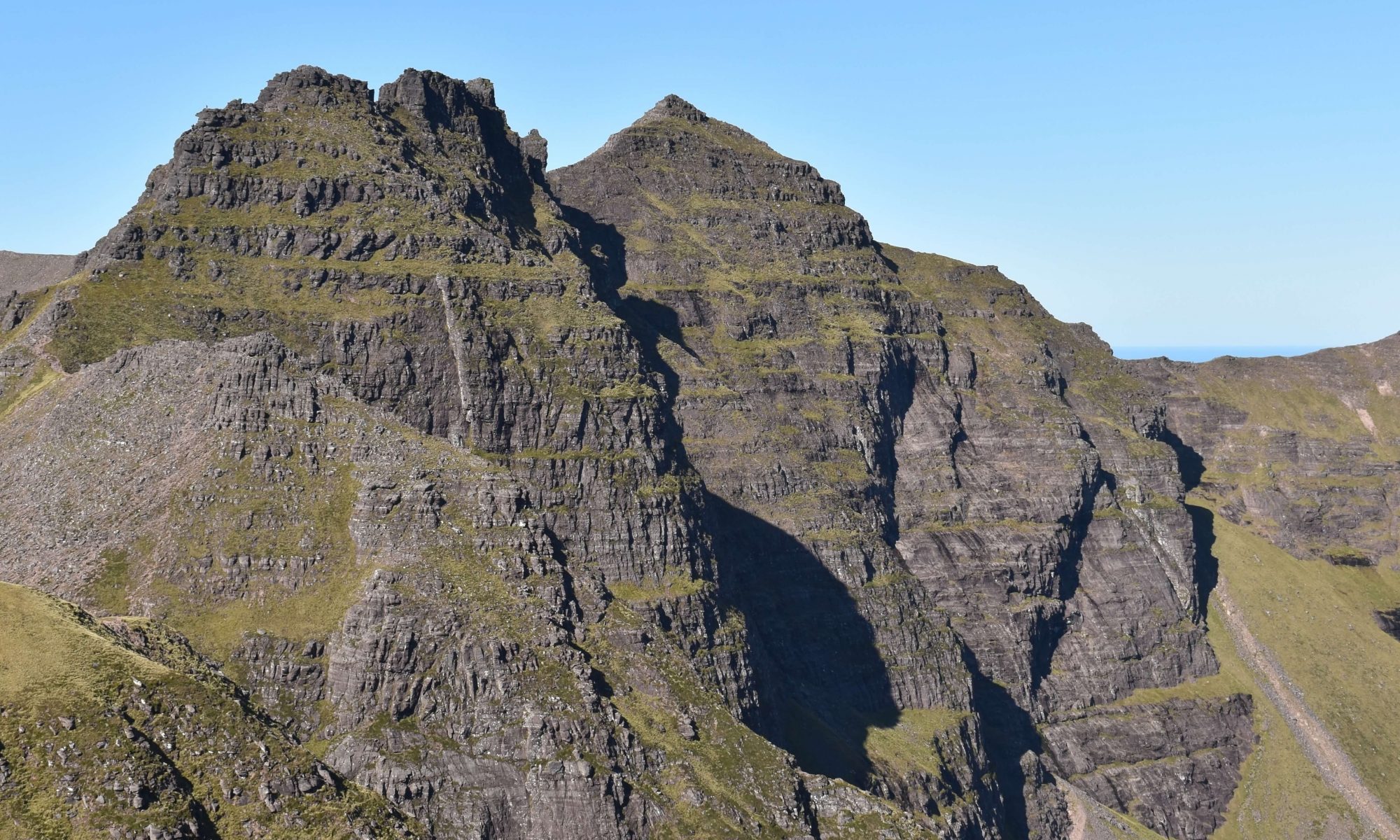 An Teallach is a Scottish mountain with two Munro summits – Sgurr Fiona and Bidein a’Ghlas Thuill. Arguably the most dramatic and beautiful mountain on the UK mainland, An Teallach can be found south west of the village of Dundonnell in the far north west of the Highlands. This route card explains the quickest and easiest way of getting to both summits for a peak bagger.

Adventurer Nic walked this route on Saturday 21st September 2019 as part of her Munro Bagging Challenge. These were Munro numbers 228 and 229 of 282 for Nic. Here, she explains how you can bag these Munros too.

The day before my boyfriend James and I climbed An Teallach we were ‘compleating’ our Black Cuillin Munros on the Isle of Skye under the expert guiding of Adrian Trendall. We descended our final Cuillin Munro, Sgurr Alasdair, and said goodbye to Adrian.

We headed part way to An Teallach and camped in woodland, a quiet spot somewhere in Strathgarve Forest.

After a decent sleep, despite persistent flashbacks the thrilling (terrifying) experience of the Great Stone Chute on the Black Cuillin the previous day, we got dressed and drove to the start of the An Teallach walk. Initially, we aimed for the Corrie Hallie car park, but this was a sunny Saturday so it was already full. Instead, we secured one of the last spaces in a smaller car park slightly further south.

We walked for a short section on the road before setting off on a track. This track was in fact the Cape Wrath Trail. Many of our Munro walks happen to use parts of this iconic long distance route. The track was wide and we nervously shuffled past a field full of cows. We are always anxious passing cattle after a friend was trampled by a herd in North Wales only last year.

We crossed on a bridge over the Allt Gleann Charachain before the trail rose to 300m in elevation and we took the right hand fork in the path. Behind us was Beinn Dearg (Ullapool) and over to the left were the Fannichs. We were treated to a lovely view of An Teallach as we glanced up to the right. Parallel to Lochan na Brathan, we peeled off the trail and hit the open hillside.

We followed intermittent faint paths and generally stuck to a north west bearing, leading onto the ridge – first walking over 954m Sail Liath and then 960m Stobh Cadha Gobhlach.

From here you have amazing views of the pinnacles of An Teallach and both Munro summits. We paused for a while here to appreciate the view. A gorgeous blue sky, a sunny late September day in Scotland with no midges! It really doesn’t get much better than this.

We followed a path steeply down, before rising up again, bypassing to the left of another pinnacle. It was only right that we stopped to enjoy lunch on a grassy platform with stunning views. We had a great vantage point from which we could watch people descending the mountain in front of us. We had a much longer lunch break than we normally allowed ourselves. The pure beauty of the scene demanded it.

We continued, following a loose gravel path upwards. And when it forked we somewhat reluctantly took the left option. This is the bypass option which cuts out the grade 3 scrambling over the pinnacles. Two back-to-back days on the Black Cuillin had sent my legs to jelly and my shot my nerves, so tackling some grade 3 scrambling without a rope seemed a foolish option to take. The pinnacles of An Teallach require a lot of down climbing. It felt a step too far for our skill level.

The bypass runs to the left of the pinnacles and we enjoyed beautiful views of the Fisherfield Munros from the trail.

The Summits of An Teallach

After seeing multiple other hillwalkers all day, we were surprised to find ourselves alone on the summit.

The weather really was as close to perfect as it could get, with glorious visibility all day and a light breeze so it wasn’t too hot.

The ridge soon rose back up again and led us onto the second Munro summit – Bidein a’Ghlas Thuill – the bigger of the two Munros. The sun nicely silhouetted the route of ascent behind us, creating a dreamy atmosphere.

The true summit of Bidein a’Ghlas Thuill is reportedly a rock 6 metres south of the trig pillar. So, as usual, I stood on all the likely contenders!

From the summit of Bidein a’Ghlas Thuill, we headed off northwards to a col before turning eastwards and descending down an eroded path into the valley.

Once in the valley, we picked up another intermittent path, which ran alongside a stream.

It was deliciously shady in the bowl of the valley and it was such a relief after a warm day.

We made an error towards the end of the route as we lost the path, ending up in the grip of some crazily high rhododendron bushes which spat us out into a field and into more bushes. We were trapped somehow between the bushes and the river. And annoyingly, the sounds coming from the road seemed so close! We backtracked to the field and were able to get back onto the road without having to cross the river. In hindsight it might have been better to have crossed the river earlier and approached the road on the east side of the river. Something to consider if you decide to follow this route.

It was less than a kilometre to walk back to the car to finish.

We nicknamed these Munros ‘Slurry Fiona’ and ‘Bidding on a Glass of Fuel’. Find out why we nicknamed all 282 Munros here.

We re-fuelled our bodies, re-hydrated with lots of water and packed our overnight bags. The day wasn’t over for us as we headed back on the Cape Wrath Trail in the direction of Shenavall bothy, ready to walk the Fisherfield Munros.